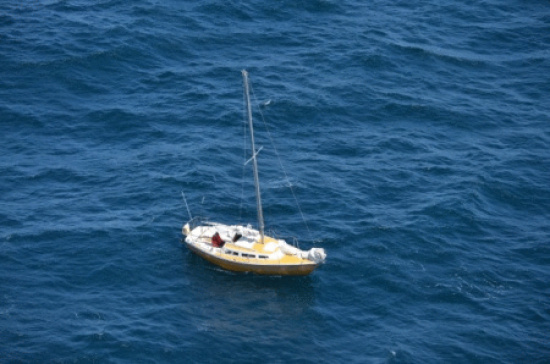 At 8:39 a.m., Coast Guard Sector Humboldt Bay watchstanders were notified by an operator aboard a container vessel, Horizon Enterprise, of an orange smoke flare. Once on scene, the operator of the Horizon Enterprise discovered a man aboard a 30-foot yellow-and-white sailing vessel waving his arms and yelling for help.

At 9:54 a.m., the rescue aircrew located the sailboat with a 13-year-old boy and 48-year-old man aboard. The aircrew lowered a radio down to establish communications with the operator of the vessel; his radio became inoperable after he reportedly fell Monday night and injured his leg and hip.

Once the rescue boatcrew arrived on scene, they transferred the two people aboard and transported them to Fort Bragg, where emergency medical services personnel were waiting. Station Noyo River launched a second Motor Lifeboat crew to tow the sailing vessel back to shore.

“We had no direct communications with the sailboat, which made this a difficult case because we had little information to provide to the boat and helicopter crews,” said Petty Officer 1st Class Kristy Neumann, Sector Humboldt Bay search-and-rescue controller.

“You can never be too prepared when embarking on an ocean voyage,” said Lt. John Briggs, aviation operations and pilot at Air Station Humboldt Bay. “The Coast Guard advises mariners to always have backup equipment whenever out on the water.”