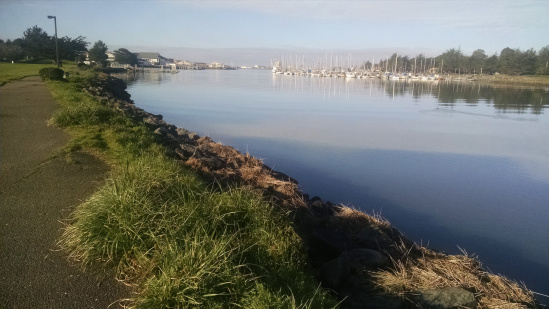 “August in Humboldt county, that’s perfect weather for runners.” Humboldt Bay Marathon founder Rich Baker thinks Eureka and Arcata could become a running destination. “You can’t do a summer marathon in a lot of places because of the heat.”

Combined with a relatively flat course, waterfront and pastoral scenery, “It’s asking to be a draw,” assistant race director Terri Vroman-Little told KHUM [hear the full interview below]. Baker said early signups are going well and about half of the registrants are from out of the area.

Organizers expect 600 runners to attempt the 26.2 mile run in its inaugural year, expanding to somewhere between 3,000 and 5,000 runners within five years. 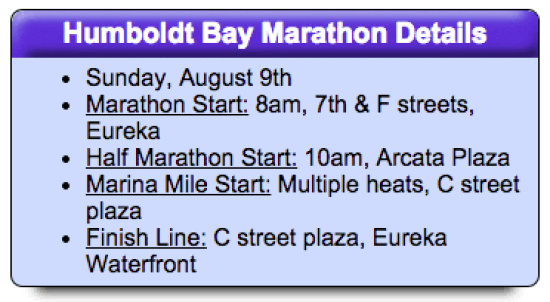 By comparison, the Avenue Of The Giants marathon/half marathon/10k had about 1,500 registered athletes last year and the Clam Beach Run had almost 1,700.

In addition to the full marathon, there will be a half marathon and one mile run, both starting later that morning.

Next Tuesday, the Humboldt Bay Marathon team will present information on the status of the marathon at both the Humboldt County Board of Supervisors meeting (~1:30) and the Eureka City Council Meeting (6 PM).

Locals can expect crowds, tourists, and traffic detours at key points along the course. And while runners should expect a fairly fast course, they should never forget that the very first marathoner probably died at the finish line.

The Humboldt Bay Marathon course starts in downtown Eureka, heads up to Henderson Center, out to Myrtle Avenue and up to Sunnybrae on Old Arcata Road, past the Arcata Plaza where the half marathoners will join in, through the Arcata Bottoms to Manila, over the bridge and then along the Eureka waterfront to the C street plaza finish line.

“It’s going to be an absolute carnival atmosphere” at the finish line, said Baker.

The course will likely be dotted with 15-20 aid stations, where runners are handed water, energy drinks, and snacks. The Humboldt Bay Marathon is also a qualifying marathon for the Boston Marathon. 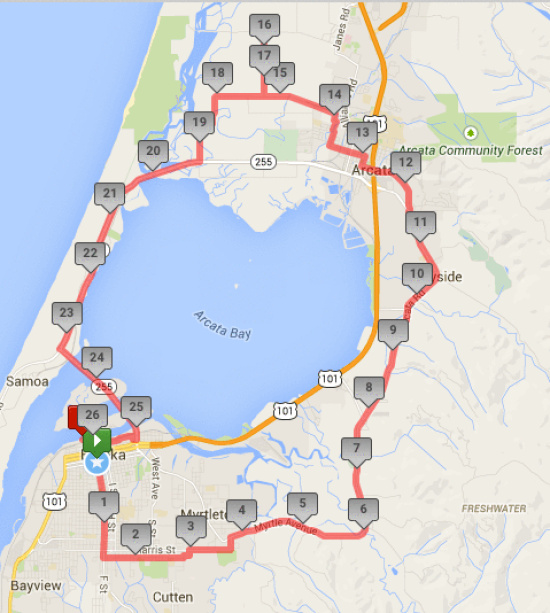 The race is a non-profit organization. “Our main goals are to promote fitness, outdoor recreation, and and trails,” said Baker. “But the fitness… I’ve already seen a lot of people locally who are saying ‘Wow, I want to do this race’, and you can find books and training regimens that [take you] from being a couch potato to your first half marathon in sixteen weeks.”

Marathons usually bring a parade-like atmosphere to some, if not all, of the race course, along with out-of-town cash. Organizers are optimistic that the runners will fill hotel beds and restaurants tables. And while almost every race generates grumbling about traffic detours on race day, evidence suggests that Eurekans might be fine with it. While local room rates and restaurant prices are much, much lower, a 2010 survey showed that the average New York Marathon participant still “spent $1,800 over the course of the weekend.”

In a large marathon, typically 60% or more of the participants are from outside the destination. They travel to the city, spend two or three nights in a hotel, eat out, book tours and visit attractions before or after the race. Many runners also bring their families. 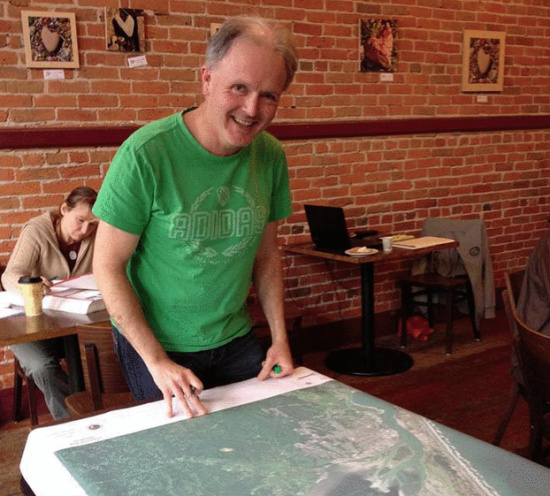