Your 4/20 ‘Countdown to Legalization’ Morning Round-Up: CNN on Weed, Smoking Out Redwood Acres 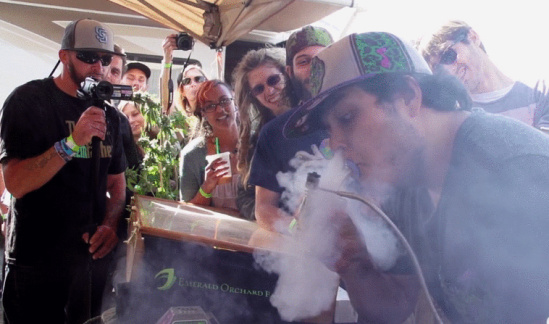 It’s only a matter of time.

Just about every Californian with sense is admitting that come the 2016 ballot, our state will join Colorado, Washington and Alaska in legalizing marijuana for recreational use. What happens to the Humboldt County economy afterward, and when, is anyone’s guess. Maybe the local scene will change slowly, here, or maybe it will change very rapidly.

Much depends on the exact form that legalization takes, which is a subject still being hammered out amongst stakeholders and other interested parties, and will ultimately be decided by the voters. In any case, we are looking at a dramatically different Humboldt County a decade from now.

It’s a fight that the nation’s once-powerful social conservative party has lost at every level, along with the opposition to same sex marriage. The country has simply moved on. One sign of that is the special program CNN aired last night: “Weed 3: The Marijuana Revolution.” In it, CNN’s chief medical correspondent, Dr. Sanjay Gupta, forcefully argues for the immediate decriminalization of medical marijuana:

In one segment of the show, President Barack Obama more or less agrees with Gupta, though in a far more qualified manner. Obama says that national policy should “follow the science, as opposed to the ideology,” and takes the position that the scientific evidence does, in fact, show that marijuana does benefit patients with certain classes of illness.

Of course, medical marijuana has been legal in California for nearly 20 years now. But the industry has only started to come out of the closet in the last few of those years, and now, with full legalization looming, and even though some folk still get busted in dramatic fashion, it seems like few people are that interested in hiding, anymore. Every day, as the Outpost has seen recently, people post their weed activities on Instagram. They’re growing, smoking, and distributing right out there in public. (Check #HumboldtCounty’s “TOMB of the DISQUALIFIED” if you want to see weed pics. For whatever reason, the Outpost faithful downvote them on sight.)

At this time last year, was it at all thinkable that there would be a marijuana-fanciers parade in Eureka? Yesterday there was. And it ended at Redwood Acres (Redwood Acres!), which was packed to the gills for “Cannifest: Humboldt’s Manifest Cannabis Festival and Trade Gathering.” Chris Smith of Media Apex Production shot some footage of the various things going on at the fest — speed transplanting competitions, tug-of-war, music and a whole lot of inhalation.

Cannifest highlight example from Jason Self on Vimeo.