Suspected Heroin House Shuttered; Redway Resident May Have Had the ‘China White’ » 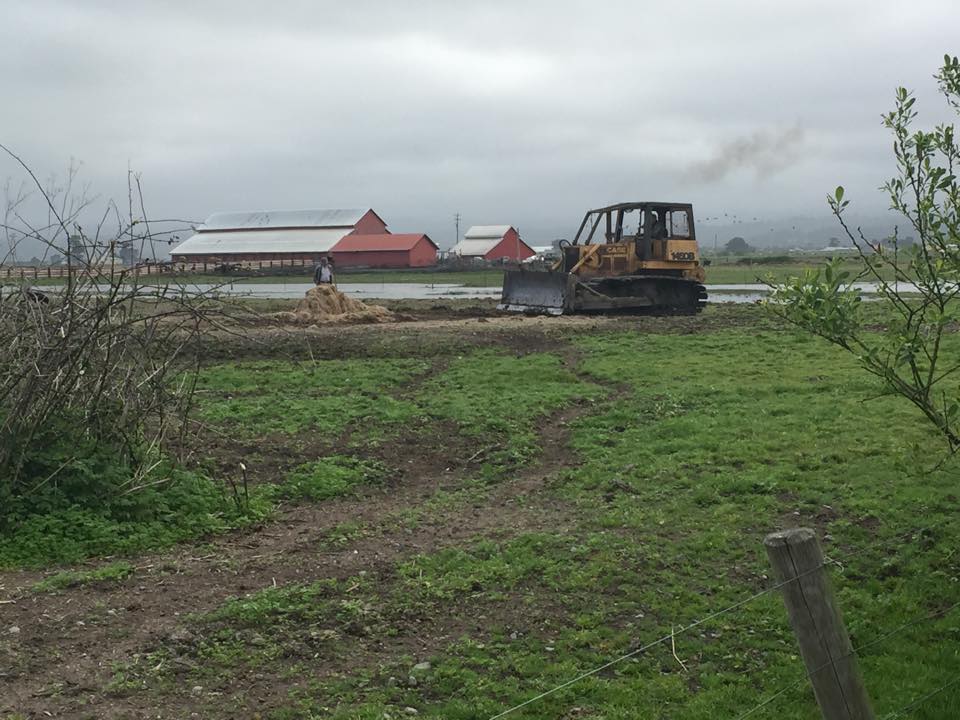 Bulldozing took place on Raymond Christie’s pastureland in the Arcata Bottoms this morning, one day after a Lost Coast Outpost report showing an open mass grave of cattle on the property. The spot that was piled with decomposing cow carcasses yesterday has now been bulldozed smooth.

Around 10 this morning the Outpost saw a bulldozer pushing soil across the pastureland, which is located in the backwards “L” formed by Jackson Ranch Road and Samoa Boulevard/State Route 255. Though bulldozer tracks led from the former grave site to this newly bulldozed area in the middle of the pasture, the Outpost could not confirm that the carcasses had been buried there. A call to Christie has yet to be returned as of this writing.

Below is video footage taken from a pull-out spot off Samoa Boulevard, adjacent to Christie’s property — the same location where a videographer first spotted the pile of carcasses.

And here are before and after shots: 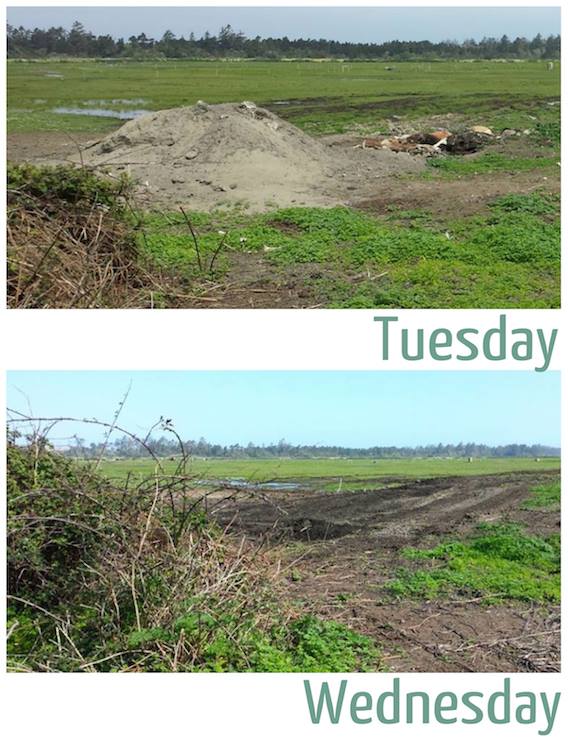 Another matter: Since yesterday’s story, many commenters on our site and on Facebook have questioned the legality of flying a drone over private property. As far as we can tell this is currently something of a gray area in California law. Earlier this year a bill was introduced in the state legislature that would make it illegal to fly over private property without the owner’s consent. But that bill, SB 142, is not yet law.

Federal Aviation Administration regulations require drones to stay below 400 feet elevation, keep away from people and planes, and remain in the operator’s line of sight. And it’s illegal to use drone footage for commercial purposes.

As pointed out in yesterday’s post, Christie’s cattle grave was visible in Google satellite imagery, which lawmakers have given the go-ahead. So how far up do property rights extend? According to USLegal.com, “a landowner’s property interest in the land extends to the airspace directly over the property, to the extent that the airspace can be used to benefit the underlying land.”

The drone pilot took a low trajectory over the cattle carcasses. Could that air space be used to benefit the underlying land? Conceivably. Had the bulldozer been in that spot at the time, the drone may have flown into it.

However, the law also says that flying an aircraft over someone else’s land is only considered trespassing if it “interferes substantially with the owner’s actual use and enjoyment of his land.”

The drone footage in question may well have interfered with Christie’s enjoyment of his land — after that footage was publicized, anyway. But authorities are currently investigating whether this particular use of the land — a mass open grave on low-lying pastureland — was itself illegal.

But let’s assume, for the sake of argument, that the drone footage was taken after California passed SB 142, that the footage was obtained illegally. Would the Outpost be legally complicit by publishing it?

In a word, no. In the case of Bartnicki v. Vopper, the U.S. Supreme Court found that it would violate the First Amendment to hold publishers legally accountable for publishing information that was obtained illegally — at least as long as the following three criteria were met: