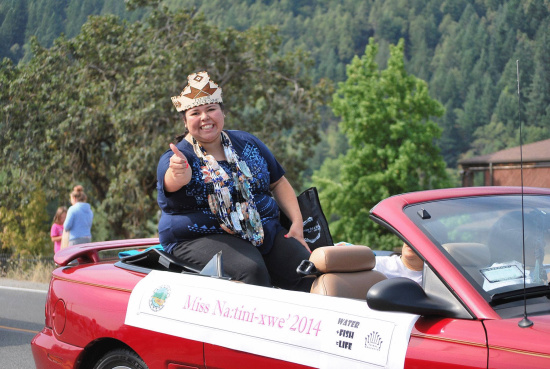 A Hoopa Valley youth leader was charged this week on four counts of child molestation involving a girl under the age of 16.

Kayla Muriel Brown, 21, the Hoopa Valley Tribe’s reigning “Miss Na:tini-xwe’” (Miss Hoopa Valley) was arrested after appearing in court to answer the charges Monday. She was released on bail the same day, and appeared in court again Wednesday. (Courthouse blogger John Chiv wrote about her appearances here and here.)

In the complaint filed against her by the district attorney’s office, Brown stands accused of three felony and one misdemeanor charge relating to child molestation. They include sexual penetration of the victim with a foreign object, alleged to have taken place on Dec. 7, 2014 — Brown’s birthday —as well as a series of other crimes that are alleged to have taken place between June 2014 and January 2015.

In addition to serving as this year’s Miss Na:tini-xwe’, Brown has served in a series of other jobs or volunteer positions involving youth in the Hoopa Valley. She has served as the cheerleading coach for the Pop Warner football program, and once wrote a guest column in the Two Rivers Tribune on bullying. She has also been a activist on tribal water issues.