« Highway 36 is Once Again a Highway You Can Drive On 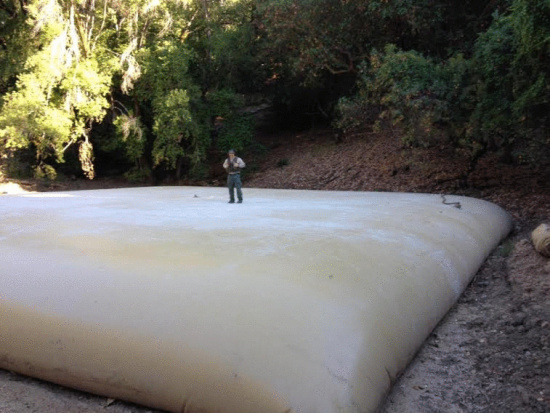 A story that appeared last week on sfweekly.com complains about a bullshit water-usage estimate for marijuana plants. That estimate — which holds that each marijuana plant consumes five to 10 gallons of water per day — is bullshit, as the very same reporter, Chris Roberts, did a good job of explaining back in April.

Roberts notes in his more recent story, “The problem is that that figure has since been published in a string of scientific articles, including this month’s issue of Bioscience.” Lamentable indeed, and we applaud Roberts for calling it out.

Trouble is, he undercuts his case by using a variety of equally bogus figures, several of which aspire to describe our own esteemed region. Check it out — here’s Roberts’ lede:

This summer has been busy for law enforcement in California’s Emerald Triangle, the sparsely populated rural counties where as much as 70 percent of the cannabis smoked in America is grown.

Seventy percent?! We at LoCO would be surprised if the Emerald Triangle produces 70 percent of California’s weed, let alone the entire nation’s. Roberts doesn’t provide a citation for the figure. With a quick Google search, the only place we could see this figure cited (repeatedly) was a Wordpress blog based in Mendocino County.

Roberts also posts the photograph you saw at the top of this post, which was provided by the Humboldt County Sheriff’s Office after the Island Mountain mega-raid in June. He calls the (admittedly massive) bladder “football field-sized.” Now, let’s think about that. Imagine the Humboldt County Sheriff’s Office somehow managed to gather enough deputies to field two entire football teams and said, “Hey, let’s throw down!” Those officers would have a pretty cramped pick-up game with the ol’ pigskin: 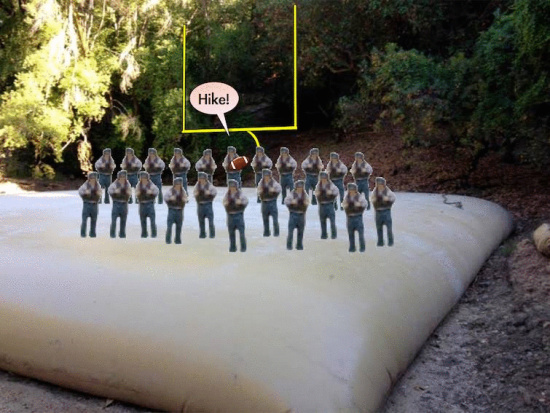 We’ll excuse that analogy as well-intentioned hyperbole. But Roberts goes on to say that this is the kind of image that fuels outrage, whether the water “was pulled from a now-dry creek or a spring,” as if those are the only two options. Industry insiders have posited that the big bag was used as part of a rainwater catchment system, and water storage is exactly what the North Coast Regional Water Board is advocating for marijuana cultivation. Which is not to say it’s commendable to use this much water for weed irrigation during a historic drought, but the source does make a difference.

Returning to the estimate in question (five to 10 gallons per pot plant per day), Roberts says, “That’s a wide range, based on a back-of-the-envelope estimate which has become fact.”

OK, some people might be treating it as fact, which they ought not to do. But how exactly did it become fact?

And then, taking in the big picture, Roberts reports that “Wholsesale [sic], marijuana is a $16.7 billion cash crop, almost double the California’s wine industry.”

Again, he doesn’t cite a source. So, again, we took to the Google in an attempt to track it down. It appears he’s quoting that figure from the very same Bioscience report that he criticizes for using bad data. And how did the Bioscience authors arrive at that figure? It’s based on a number of hypotheticals (see p. 4), one of which is a U.S. Department of Justice estimate that California (the entire state) produces 60 percent of the marijuana consumed in the United States, which would hardly allow the Emerald Triangle to produce 70 percent of the same total, as Roberts claims.

So, while Roberts rejects the estimated water usage figure cited in the report, and while he ignores the report’s figure on marijuana market share, he seems perfectly willing to adopt its estimate of the cash crop’s value.

Roberts wraps up his report thusly:

“What shouldn’t be lost in all this is the premise of the Bioscience article: that cannabis production has an environmental toll. Nobody knows what the precise toll is, but that hasn’t stopped people from guessing — or having those guesses accepted as gospel.”

We agree that the environmental toll warrants serious attention. And guessing can be problematic.

Cherry-picking those guesses is kind of a bummer, too.