Party For Your Right to Fight: Eureka Event Seeks to Channel City’s Outrage Over Crime 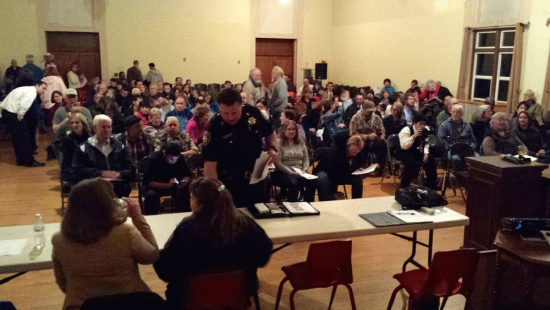 Anger and jubilation don’t often coexist, but they found occasion to mingle during the first 15 minutes of Tuesday’s Humboldt County Board of Supervisors meeting.

All five board members seemed to have a little bounce in their steps as they filed into chambers shortly before 9 a.m., and after the consent calendar was approved, Supervisor Rex Bohn introduced a special presentation with childlike enthusiasm: “We’re gonna have a party on Saturday!” he said.

That would be the Neighborhood Watch Block Party in Eureka’s Carson Park, which was largely organized by two Eureka neighborhood watch captains, Jeannie Breslin and Jean Scheffler. They, too, were brimming with happy energy, seated in the front row Tuesday. Bohn read a proclamation declaring this upcoming Saturday “Neighborhood Watch Block Party Day” in Humboldt County before coming down from the dais to hug the two women. A smiling Supervisor Virginia Bass modeled an electric-yellow neighborhood watch safety vest, swiveling her shoulders playfully.

Breslin and Scheffler then bellied up to the microphone, still smiling, and, in a rather incongruous turn, Breslin beseeched the community to, “Find your sense of outrage.”

That shouldn’t be too hard for many Eurekans. Saturday’s block party aims to galvanize the accumulated frustration of residents who feel increasingly besieged by petty (and not-so-petty) criminals.

“This is a serious issue,” Breslin said. “We’re starting a movement. We’re going to take ownership of our city. The criminal element has eroded our quality of life.”

Eureka Police Chief/blogger Andy Mills — who came here from the crime-ridden streets of San Diego — recently noted the vein of pessimism running through the community. “There are some Negative Nancy’s who think Eureka is done for, toast, history,” he wrote in a post promoting Saturday’s event. “They blast you and me when we encourage others to be positive and see the good in Eureka. They say roll up the streets after turning off the lights, the party is over.”

Saturday’s event defies such attitudes with a literal party, albeit one fueled by frustration and a sense of urgency.

In an interview Tuesday with KHUM’s Larry Trask Breslin said, “We have a great community, but we have become nearly imprisoned in our own homes.” Criminals, she said, feel entitled “to pillage our neighborhoods and take anything that isn’t nailed down.”

Violent crime in Eureka has actually declined over the past two-and-a-half years. 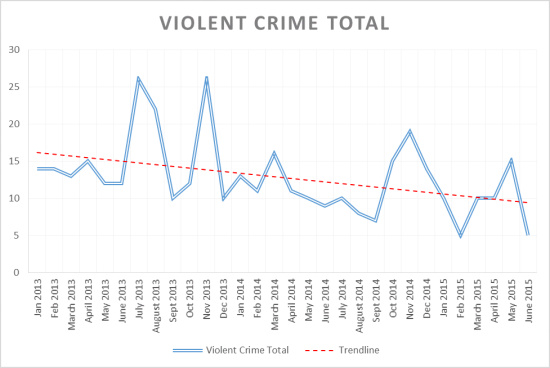 But property crime is another story. The graph below shows a slow upward trend in property crimes, which include burglary, theft and car theft. 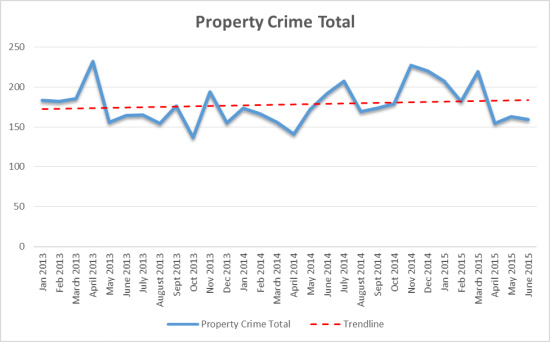 That slow ascent may not look too alarming, but here’s the rub: Among cities with at least 20,000 residents, Eureka has the highest property crime rate in the state. We mentioned this ignominious distinction last September, when the most recent data from the FBI’s “Uniform Crime Reports” was from 2012. The 2013 data has since come in, and we’re still at the top of that list, by a pretty wide margin.

But Eureka’s existential malaise runs deeper than these numbers, or even the crimes behind them. The most common complaints among locals tend to include references to “tweakers,” “meth-heads” and the homeless, people deemed unsightly and unwelcome regardless of their connection to crime (or lack thereof).

Criminologist note that no city’s problems can be traced to a single cause; crime tends to arise from a complicated interplay of environmental, economic, psychological and cultural factors. In Eureka those including everything from our outlaw culture to high rates of drug use, insufficient mental health care, geographic isolation and more. (Insert your theory here.)

The nascent effort to rehabilitate Eureka’s self esteem — neatly symbolized by those “I Like Eureka” bumper stickers — seems aimed at growing and harnessing civic pride as an antidote to crime. The more people “like” Eureka, this theory goes, the more people will be motivated to defend and improve it.

“There has been a loss of community,” Breslin told Trask. “This event is to empower our community.”

At the supervisors’ meeting she extolled the virtues of community organizing website Nextdoor.com, calling it a “game changer,” and Scheffler, her co-presenter, said at least 18 neighborhoods will be participating in Saturday’s event.

“We’re standing up for Eureka, is what we’re doing,” Scheffler said.

Supervisors are very much on board. Bohn said he thinks the community is ready to take a stand. “We are at a tipping point,” he said. “We’ve just had too much of it.”

And 5th District Supervisors Ryan Sundberg said he’s seen a change throughout the county, a “rough shift” to witness for people who’ve lived here their entire lives. “You can’t leave stuff in cars; everyone leaves their lights on. … It’s just a different environment now.”

Breslin and her fellow organizers are hoping to channel anger and jubilation — those two contrasting emotions on display at this week’s supervisors’ meeting — to inspire action, starting with Saturday’s party. The event will include numerous food vendors, raffle items, live music from the Delta Nationals and information on crime prevention, disaster preparedness and more. (Click here for the poster.)

Below is Larry Trask’s interview with Breslin and Eureka Police Department’s Suzie Owsley on KHUM.

And below is where you’ll find Carson Park. The event will take place rain or shine. Organizers are asking folks to leave their dogs at home. Extra parking will be available at the old Marshal School on the corner of Trinity and I streets.