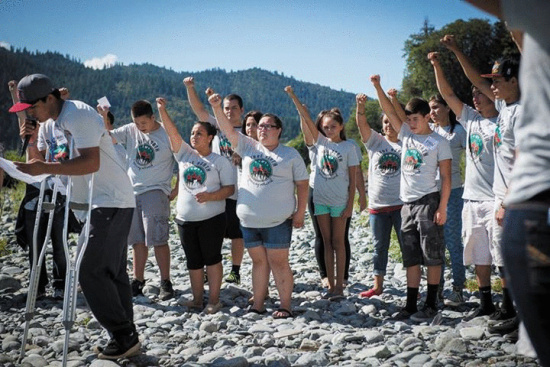 On Saturday afternoon, as a regional gathering of a community organizers was winding down, a group of Hoopa Valley kids stormed the stage of the tribal community center and invited the 150 or so people in attendance to march with them down to the banks of the Trinity River, and to join them in protest.

The target was the Pacific Connector Gas Pipeline, which — if built — will ship fuel via pipeline through southern Oregon to a brand-new liquefied natural gas export facility at the Port of Coos Bay. The pipeline would cross scores of rivers and streams, including the Klamath.

The project has long been controversial for various reasons. It would require substantial takings of land against the wishes of property owners. (NPR has a good overview here.) It would require a 100-foot-wide “permanent clearcut” along its entire route. And as with the failed LNG proposal that came through Eureka a decade back, some Coos Bay citizens fear that an earthquake or tsunami hitting the plant could more or less wipe the town off the map.

The Hoopa Valley Youth Council, though, focused on a different concern — the possibility of a pipeline rupture upstream in the Klamath, which could poison an already damaged river. At the rally on the banks of the Trinity, each member in turn shouted “I’m sick!”, followed by a statements concerning the health of the Klamath/Trinity watershed, or the way Native American concerns are downplayed in debates over those matters.

On Saturday, August 29, at the Neighborhood Facilities Building, in Hoopa, California, at 3:30 pm, the Hoopa Valley Youth Council will publicly request that Governor Brown and the State Water Board protect Californians from the devastating impacts they would suffer if the Jordan Cove Pacific Connector Pipeline were to be installed.

“This is the coming out party for a new movement that is building the bridge for the youth in Hoopa,” states KisDyante Joseph, Co-Chair of the Hoopa Valley Youth Council.  “We’re going to come out and basically announce to the world that we as a group of youth are connected and coming out against the pipeline.  We are directly addressing Governor Brown, bringing to his attention these issues, and pressing him to listen to us and acknowledge our struggles.”

The Liquid Natural Gas Pipeline will cross 400 rivers and streams in Oregon, including the Klamath River, just north of the California border. The Klamath River is proposed to be the main source of water withdrawals for the pipeline’s hydro stacking, which will be millions of gallons of water from California watersheds, and the polluted water will sit in holding ponds. The Klamath River runs through Humboldt and Del Norte County.