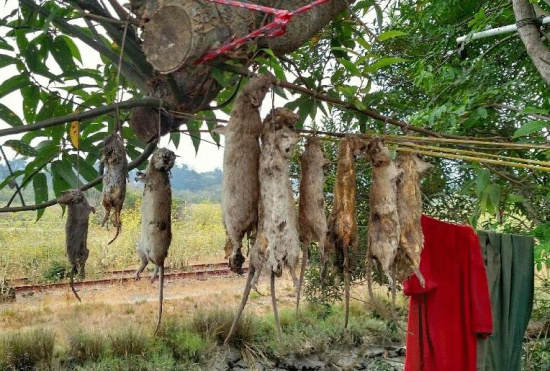 Dead rats hung from a tree in a homeless encampment along Eureka’s waterfront. Image courtesy City of Eureka.

This morning around 10:30, Eureka Police received a call saying that a man who lives in the homeless encampment behind the Bayshore Mall had been shooting a rifle toward birds in the air before aiming the gun at a construction site on the nearby Chevron terminal, where workers were on the job.

Two Thursdays ago, staff from the City of Eureka was at the other end of that encampment, a long stretch of coastline that’s been dubbed “Devil’s Playground,” when they found what’s pictured above — a line of large, dead rats hanging from a tree branch. 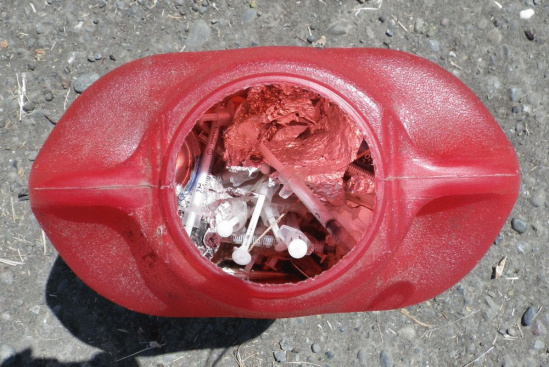 Ninety-seven needles were removed from a homeless encampment at the foot of Del Norte Street. City of Eureka.

The encampments pose health and safety hazards to residents and visitors alike. On the same visit to the site, at the foot of Del Norte Street, staff collected 97 hypodermic needles (pictured at right).

These homeless encampments along Eureka’s waterfront are getting out of hand, according to city staff, and at a meeting Tuesday night the Eureka City Council will consider a pair of ordinances aimed at reinforcing the city’s efforts toward addressing the issues.

A report prepared for council and signed by City Manager Greg Sparks outlines the seriousness of the situation: “Despite recent cleanup efforts, sanitation issues, hazardous waste and criminal activity within [city-owned waterfront property] has become a major concern to the community at large, and has risen to a level of concern from regulatory agencies.”

The city has a responsibility to keep public property safe and accessible to all, the report states, adding that the waterfront in particular is important to tourism, economic development and future plans for trail development.

One ordinance to be considered Tuesday night aims to prevent homeless people from stockpiling their belongings on public property. The ordinance articulates the city’s authority to confiscate and impound any “personal property” being stored on city-owned property if that property is not removed after 24 hours’ written notice. “Bulky items,” meaning anything besides a tent that’s too big to fit in one of the city’s 60-gallon trash cans with the lid closed, could be seized immediately.

When items are taken, city staff would leave a “conspicuously placed” notice at the site informing the resident(s) what was taken when, the location where the property could be picked up and a warning that it could be tossed if not picked up within 90 days.

“People tend to take ownership of their little plots out there,” said Eureka Parks and Recreation Director Miles Slattery. “Whether it’s a tent or a built structure, people will pack everything into that area and say it’s all personal belongings. We’re having trouble maintaining our property because we don’t have the wherewithal to impound that property.”

Slattery added that staff has modified the 60-gallon totes from Recology with locks for storage of these belongings. Removal of these items and the people hoarding them is important not only for public safety and economic development, Slattery said, but also wildlife management. The property has been invaded not just by humans but also invasive species such as phragmites, pampas grass, fennel and berries that are choking out the native marsh species.

Hundreds of thousands of dollars have been invested in restoring the PALCO Marsh area, Slattery said, but an array of trailside interpretive signs had to be removed due to excessive vandalism and graffiti.

A report on the ordinance prepared by City Attorney Cindy Day-Wilson states that city staff is already operating under the guidelines spelled out, and that approval of the ordinance would merely serve to “codify the process the City already follows with regard to personal property stored on City property.”

But this item proposes a list of new rules for the waterfront area, as well. Among them:

In one last related item, the City will be requesting $750,000 in federal funding to go toward Phase C of the Waterfront Trail. That money would go along with about $2.5 million already secured from Caltrans’ Active Transportation Program and a staff-level commitment from the Coastal Conservancy for another $1.5 million for Phases B and C, according to Slattery.

The meeting will take place at Eureka City Hall starting at 6 p.m.