« Elk River Road Goes Underwater Again. What About You? Are You Underwater? 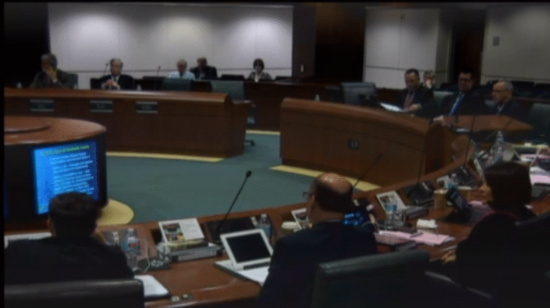 A video still from the Dec. 11 hearing of the Judicial Council of California.

Straining under the burden a of a large backlog, including more than two dozen homicide cases, Humboldt County Superior Court has been granted a $110,000 loan from the Judicial Council of California, the policy-making arm of the state court system. In applying for assistance, local court officials said that the unusually high number of homicide cases, along with underlying staffing problems, have created an untenable situation.

“The court is barely functional at current staffing and operating levels,” the application reads.

The court initially hoped to get more than $250,000 — and not as a loan but rather an urgent, one-time distribution — but during a subcommittee hearing it agreed to lower its request and make up the difference by pulling money from its own fund balances.

In granting the $110,000 loan amount, the Judicial Council urged the court to apply for reimbursement from the state’s extraordinary costs of homicide trials reimbursement program. In other words, Humboldt County Superior Court may not have to pay the loan back.

The glut of cases in the local court has been developing for several years, but with a record 16 homicides in the county last year and another 15 to date this year, the system has been stretched beyond capacity. The court has run short on facility space, court reporters and security officers. Back in October, in an effort to clear up the growing backlog of cases, the court decided to use a first-floor jury room as a courtroom for misdemeanor cases. It also put civil cases on the back burner and started holding all-day sessions for criminal trials, as opposed to the usual schedule of 8:30 a.m. to noon.

At the Dec. 11 meeting of the Judicial Council, which was the first such meeting to be streamed online, Humboldt County Superior Court CEO Kim Bartleson was phone-conferenced in as the panel of judges considered the request. She told the council that in addition to the space that the county recently granted, the court is also trying to negotiate use of the new federal courthouse by the Humboldt County Airport.

She also mentioned that, since the application was submitted in early November, two more homicide cases have been filed, bringing the year’s total to 26. And none of the defendants in active cases have waived their right to a speedy trial, meaning there’s a deadline to get each case before a jury.

Humboldt County Superior Court averages 11 homicide cases per year, making this year’s total more than double the typical caseload. Some of the cases, including the recent double-murder trial of Jason Anthony Warren and the upcoming trial of Gary Lee Bullock, date back to 2012 and 2013.

The application asked what the consequences to court operations would be if funds were denied. The response was grim:

“An already demoralized staff would have to accept the reality of denying their community a functioning court system,” it reads.

That, in turn, could impact public safety, the court reasons:

The court will not be able to provide trials for defendants’ numerous homicide, felony and misdemeanor cases that do not have time waivers. This may pressure the DA to make plea offers contrary to public safety or to dismiss cases. Public safety will be at risk because the Court is not be able to timely adjudicate cases. Additionally, serious crimes will continue to increase because of the adjudications.

Part of the problem, the court explains, lies in an overworked staff that lives in poverty.

“In order to reduce the high turnover and low morale, we have to start paying a livable wage and also create a career path for clerks,” the court notes in its application. “We are beginning this process with our current union negotiations.” Nearly 10 percent of the court’s “needed positions” remain vacant and another five percent of the staff is on a leave of absence of one sort or another. Court staffers are leaving for better-paying jobs at local grocery stores, the application states.

The county clerk’s office is currently only open from 9 a.m. to 2 p.m.

With only $110,000 of its initial $252,000 funding request forthcoming, the court will have to raid its General Fund in order to avoid ending the fiscal year in the hole. And according to the court’s application, things aren’t getting any better. Projected budgets show the operational deficit growing over the next two fiscal years.

But for this year, at least, the Band-Aid has been applied. After the motion carried, the committee chair, Judge Tani Gorre Cantil-Sakauye, said, “And, Humboldt, we wish you the best of luck on those 26 homicides.”

To which the disembodied voice of Court CEO Kim Bartleson replied, “Thank you, and maybe we’ll see no weapons on the street during the holiday.”