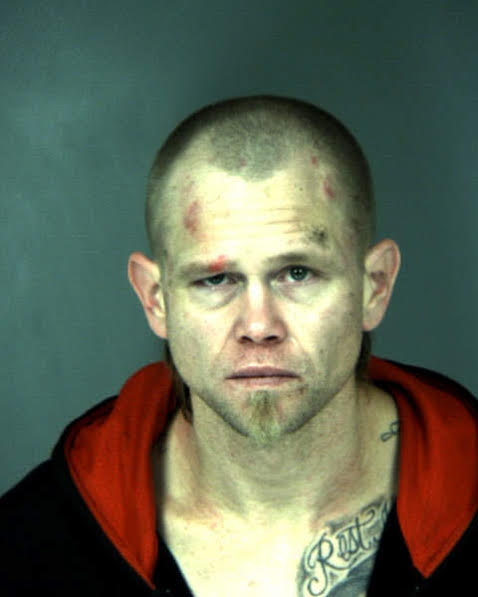 On 01/19/15, the Eureka Police Department received information from multiple sources that wanted fugitive, Jason Ryan Omholt (36), may be in possession of a recently stolen green 1994 Chrysler minivan. Omholt had been on the run from law enforcement for some time, and he’d managed to evade capture by eluding officers on several occasions.

Omholt and a female companion are suspected of committing numerous residential burglaries around Eureka. He has been prominently featured in EPD’s Eureka’s Most Wanted poster with outstanding felony warrants for vehicle theft, assault with a deadly weapon, evading police, vandalism, possession of controlled substance, and parole revocation.

After receiving the information concerning his association with the stolen van, EPD officers began scouring the city looking for the vehicle.  During the early morning hours of 01-20-15, officers located the van parked unoccupied on the 1800 block of 3rd Street, Eureka. Officers subsequently searched a nearby apartment with consent from the owner and pursuant to a resident’s probation status.

Omholt was located inside a partially barricaded back bedroom in the apartment. As officers attempted to enter the room, Omholt immediately fled by jumping out of a rear window. Officers positioned around the outside perimeter of the apartment intercepted Omholt and took him into custody after a short struggle.

Omholt was arrested and transported to the Humboldt County Correctional Facility where in addition to his multiple felony warrants, he was booked on fresh charges including possession of concentrated cannabis, possession of a controlled substance, possession of stolen property, and possession of a stolen vehicle.  Omholt is currently being held without bail for violation of his parole.