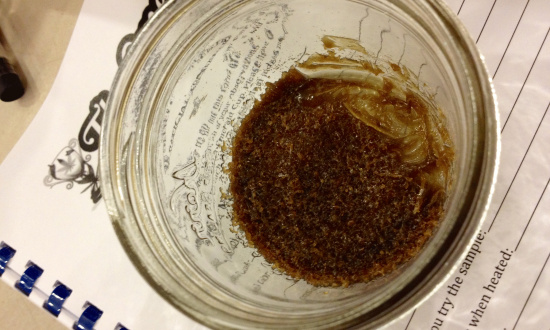 This is a “come all show all seminar,” where attendees will see “how to wash, zest and dry bubble hash.” (Quotes from the 3rd_gen_family Instagram.) Parker is demonstrating his personal technique from start-to-finish, and he’s “holding nothing back.” You do not need a medical marijuana recommendation to go check out the demo.

Parker makes award-winning solvent-less extracts (a.k.a. cold-water or bubble hash) that you can dab. This is precisely what’s fresh about this demo — he’s making bubble that you can dab. You gotta know, dabbing isn’t restricted to solvent-derived extracts, like BHO. You can dab bubble too, but it has to have the right consistency. Parker will show you how to get there. (I will vouch for Parker’s hash — it’s bomb.)

I caught up with Wonderland Nursery Director of Operations Sarah Hartsoe the other day to learn more about the upcoming demo. Hartsoe’s been in the medical marijuana biz for the past five years. According to her, the popularity of bubble hash in that time has been “nonexistent — pretty much no one asks for bubble hash,” she says.

However, Hartsoe says that lately there’s been a surge in the popularity of bubble hash because extract artists like Parker are coming out with “full melt” bubble. “Full melt” refers to hash that can be dabbed on a glass rig or an electric nail without leaving any residue or ash. In other words, the hash disappears when you hit it, just like a solvent-derived dab. “So it’s nice and clean,” she says, “especially with glass-on-glass.” (She’s referring to dabbing on a quartz nail.)

“The makers of [solvent-less extracts] have really stepped up and made it full melt, and that’s where they filled in the gap. People are stopping the BHO and CO2 extractions completely and going back to bubble hash. It’s cool again,” Hartsoe says. “It went from being something you sprinkled on cannabis or rolled in a joint to something you can dab.” And it’s a dab you can do with out having to worry about ingesting residual solvents.

Parker’s goal is to show that making good-quality, “full melt” hash like this is doable, but please bear in mind that this is a day-long demo. If you want all the ins and outs of his process, show up at 10 a.m. and plan to hang out till 4 p.m. He’ll start with “fresh frozen whole plant” material (quote from his 3rd_gen_fam Instagram), and he’ll end with full melt solvent-less concentrate.

Hartsoe says the best solvent-less extracts are made from fresh bud, not trim, and certain strains are superior for bubble hash making as well. “You would still want to test your cannabis for mold, fungus and mildew beforehand,” she says, but as far as testing for residual solvent, well, that’s just something you don’t have to worry about with bubble — there’s nothing to purge.

In terms of equipment, some people use straight up washing machines or specially designed hash-making machines (like the Bubble Now) and/or bubble bags (like Boldt Bags). You also need lots of good quality ice and/or dry ice. (Like, if you want to make good beer, you gotta use good water…). Parker’s demo will involve both bubble bags and a machine.

“I think it’s important for people to know that instead of blasting or using butane or CO2 to make a concentrate,” Hartsoe says, “you can do it in a safer, more affordable way. It is healthier and it is safer for the environment. There is less of an impact… There are no cans to dispose of.” At the demo, Trim Scene Solutions will have a display of everything you need to make bubble hash, so you can check out some merch. Plus, Pearl Moon from 707 Cannabis College is doing a hand-saving “water demo” for trimmers. Apparently, if you take regular breaks from trimming to dip your hands in super cold or hot water for certain lengths of time, you can prevent strain. Moon will fill you in on the deets.

This is a free event and everyone is welcome, but to make a purchase or to become a member at Wonderland Nursery you need a California doctor’s 215 recommendation and California ID. And Hartsoe wants to remind people that Wonderland Nursery is still giving away free CBD clones to patients, so “they can utilize the free clones and start preparing to make a CBD-rich solvent-less concentrate of their own.”