After completing the investigation into the structure fire on Dubeault Road, investigators believe that the most likely cause was an ember from the fire place igniting nearby combustible materials.

Please remember to give your heating appliances and fire places some space. “You should maintain a three foot clearance around all heating devices” say Jenny Williamson, Fire Prevention Specialist. “Also remember to test you smoke alarms every month,” Williamson added.

(January 8, 2015)- Shortly after 5:00 this evening, the Arcata Fire District responded to a structure fire near the 4400 block of Dubeault Road off Jacoby Creek Road. Firefighters were advised by Dispatch that all occupants had evacuated.

While in route to the scene, a large column of black smoke was reported to be visible from Jacoby Creek Road. When crews arrived, they found a single family structure approximately 50 percent involved with a large amount of fire showing at the front of the structure.

“The first arriving engine crew were able to take quick action with the arrival of a volunteer firefighter and additional Chief Officers” said Assistant Chief Justin McDonald. Crews were able to use a deck gun from an engine to knock down the large volume of fire and then deploy two hose lines to the rear of the structure for an interior attack on the fire. Shortly after crews arrived and started suppression efforts, a power line that was damaged by the fire fell to the ground and began arcing which caused a tree and brush in the front yard to ignite. Suppression efforts were hampered by the arcing power line. Pacific Gas and Electric (PG&E) was dispatched to the scene to control all utilities. Fire crews were able to contain and control the fire after approximately 30 minutes.

There were no injuries reported, the occupant and her pet were able to evacuate safely. The cause of the fire is currently under investigation.

“The resident was very fortunate in that she had a working smoke alarm that gave her early notification that there was a fire in her home,” says Jenny Williamson, Fire Prevention Specialist. This serves as a reminder to test your smoke alarms monthly and to practice your escape plan.

There may be water issues in the Jacoby Creek/Bayside area due to the water storage and a possibly damaged fire hydrant. The City of Arcata public works department was called to the scene to help mitigate the situation.

There was a great effort from multiple agencies to help minimize this incident. Arcata Fire District responded with three Chief Officers, three engines, and one water tender. Humboldt Bay Fire provided coverage for our fire district with one engine and one Chief Officer. Arcata Police Department and California Highway Patrol assisted with traffic control, PG&E assisted with utilities and Arcata Public Works assisted with the broken fire hydrant. 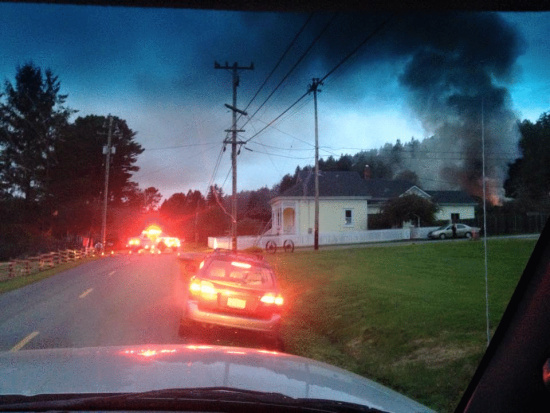 Smoke and flames rise from a home on Debeult Road. [Photo provided by Alex Bateman.]

A fire ripped through a residence in Bayside this evening a little after 5 p.m. (See video at Channel 3 News.) Jacoby Road was blocked for a time as multiple crews fought the flames. 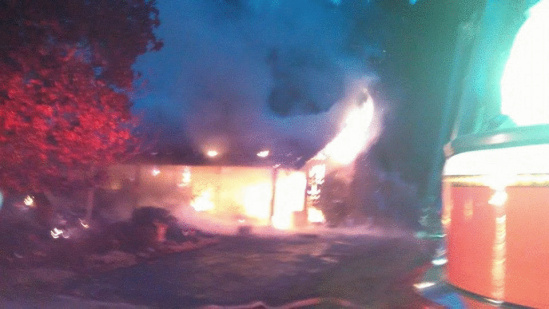