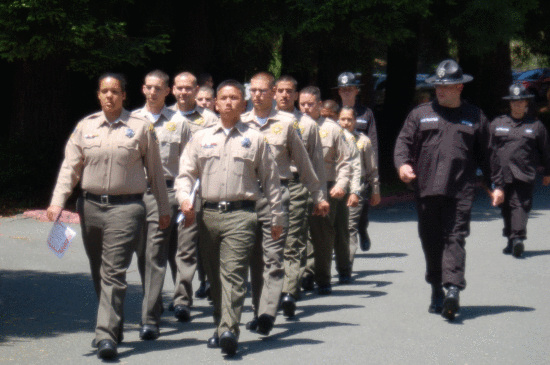 As of this morning, Humboldt County’s deputy sheriffs are working under an expired labor contract. The one-year contract from 2014 expired at midnight last night, leaving union workers to continue under the terms of that outdated agreement — terms that labor leaders say have left the Sheriff’s Office underpaid, depleted and demoralized.

Jaime Barney, a deputy sheriff working at the Coroner’s Office and a negotiator with the union, told the Outpost today that negotiations with the county have reached a standstill. There hasn’t been a meeting in more than a month, and no meetings are currently scheduled, according to Barney.

The Humboldt County Deputy Sheriffs’ Organization (HDSO) represents its namesake along with deputy coroners, investigators with the District Attorney’s Office, sheriff’s detectives and probation officers. Their labor contracts generally last three years, but after difficult negotiations a year ago the two sides agreed to a one-year contract. Barney said the terms of that contract have lead to an exodus of experienced deputies.

Despite the recent passage of Measure Z, a countywide half-cent sales tax measure dedicated to public safety and essential services, union reps were disappointed with the funding given to law enforcement in the budget recently passed by the Board of Supervisors. The 2015-16 budget added line items to unfreeze positions for new deputies but did nothing to increase the compensation of deputies currently on the force, Barney said.

“The public needs seasoned, trained, veteran officers,” he argued. “More boots on the ground, yes, that’s great. Unfortunately, Humboldt County has become a training ground for new guys. They come here, get training, and then counties all over California snatch them up.”

The Outpost asked to speak with someone with the county about the status of negotiations as well as the compensation level of local deputy sheriffs compared to other law enforcement. In response the county issued the following statement:

The parties continue meeting and exploring concepts in hopes of reaching agreement. Neither side has declared impasse at this time. The terms and conditions of employment remain unchanged from the prior contract at this time.

Deputy sheriffs in Humboldt County earn significantly less than deputies elsewhere in California. They also earn less than officers with the Eureka Police Department, the Arcata Police Department and even Humboldt State University Police. The low compensation makes retaining deputies a challenge, Barney said. According to figures collected by union officials, 26 deputies have left the Sheriff’s Office since 2010, including 10 who retired and another 10 who left for other jobs.

The Humboldt Deputy Sheriff’s Organization also assembled a graph [pdf available here] that compares Sheriff’s Office staffing levels to the county’s population over the past four decades. The union argues that on-the-ground deputies are at the lowest level in modern history, though the graph has only five data points and includes a 20-year gap from 1991 to 2011.

Of the 63 deputies currently working in the department, 43 are left to patrol a county that’s nearly the size of Connecticut, 24 hours a day and seven days a week, Barney said.

“After 2 [a.m.] most nights, Garberville and Hoopa are not covered,” he said. “Deputies have to come from Eureka or McKinleyville.” And when they do, he said, it leaves those cities without coverage. Fewer deputies also means slower response times. Barney pointed to a fatal shooting in Shelter Cove last year, when it took an hour-and-a-half for deputies to respond.

Barney sais he’s happy that some Measure Z funds will be made available to hire new recruits and fill positions that have been left vacant. “But it’s not happening fast enough,,” he said, adding that more needs to be done to retain experienced deputies. “We’re treading water right now,” Barney said.