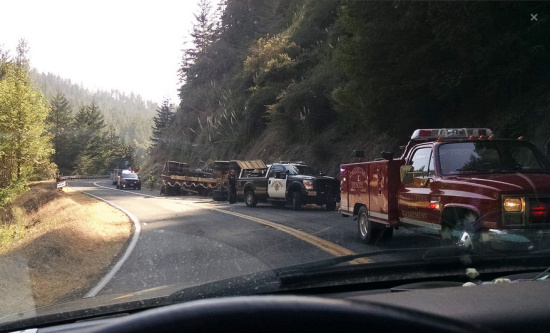 At approximately 3:25 p.m., 57 year old Ben Allen Bray of Arcata was driving a 2007 Kenworth semi-truck while pulling a log dolly fully loaded of logs westbound on State Route 36, one mile west of Grizzly Creek State Park.  Bray attempted to negotiate a left curve in the roadway at an unsafe speed for the curve, causing the semi-truck and trailer to overturn onto its right side.  The semi-truck and trailer came to rest within the westbound lane of State Route 36 and partially on the west shoulder.  One-way controlled traffic was maintained with the assistance of Caltrans while the collision scene was being processed.  Bray was uninjured in this traffic collision.

Following the collision, approximately 50 gallons of diesel spilled from the semi-truck’s fuel tanks onto the shoulder.  Caltrans and Humboldt County Environmental Health (hazardous materials specialists) responded to the scene and coordinated cleanup efforts with Pacific Earthscapes, who is responsible for the cleanup.