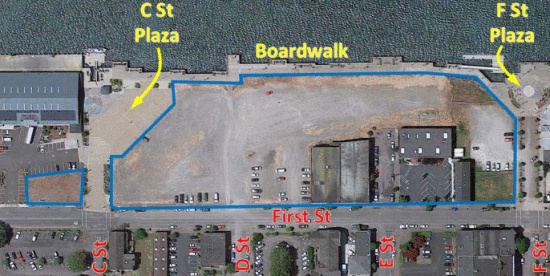 Heads up, all you armchair city planners out there: Here’s the big opportunity you’ve been waiting for.

A couple months ago we told you about how the City of Eureka was launching an ambitious project to develop some of the City’s choicest waterfront property — the mostly gravel area surrounded by the boardwalk, First Street and the C and F street plazas.

Well, city staff is forging ahead on the design phase of the project, and they want your help.

Below is a press release announcing a series of events and workshops aimed at gathering public feedback for the project — but this is far more inclusive than your typical submit-your-comments type of feedback. Staff has arranged a workshop, a series of public site tours and, coolest of all, this:

“On Wednesday and Thursday, the public is invited to attend one of four design workshops during which everyone will have the opportunity to work with professional architects to draw their visions of the site.”

The week of events kicks off Monday evening at the Wharfinger Building and continues through Friday evening. Click here for a pdf of the flyer with the full schedule. And read the City’s press release below:

The City of Eureka is embarking on a process to gather public feedback regarding concepts for development for the area behind the boardwalk, between C Street and F Street. The project area is encompassed by the boardwalk on the north, the C Street Market Plaza on the west, Waterfront Drive (1st Street) on the South, and F Street Plaza on the east.

On Tuesday, the City will host public site tours. During the site tours, members of the public will have the opportunity to walk the site with professional architects and City officials to learn about the site and to provide feedback. Anyone interested in attending a site tour should meet at the foot of C Street at either 9:30 a.m. or 5:00 p.m. on Tuesday (7/28).

On Wednesday and Thursday, the public is invited to attend one of four design workshops during which everyone will have the opportunity to work with professional architects to draw their visions of the site. The design workshops are at the Wharfinger Building on Wednesday at 3 p.m. and 5 p.m. and on Thursday at 9:30 a.m. and 11:30 a.m.

Finally, on Friday (7/31) at 5:30 p.m., the City will host a Presentation of the Final Concepts, which will include several professional drawings reflecting the public’s visions.

This is a phenomenal opportunity for Eureka. The area adjacent to the boardwalk is among the most valuable properties [in] the region. We should all be grateful to those who developed the boardwalk the C Street and F Street plazas, and the surrounding blocks of Old Town. We owe it to those previous generations to develop something great on this site. We want help from the community to determine what this site could become. This is the community’s opportunity to establish a vision for the Eureka Boardwalk properties.