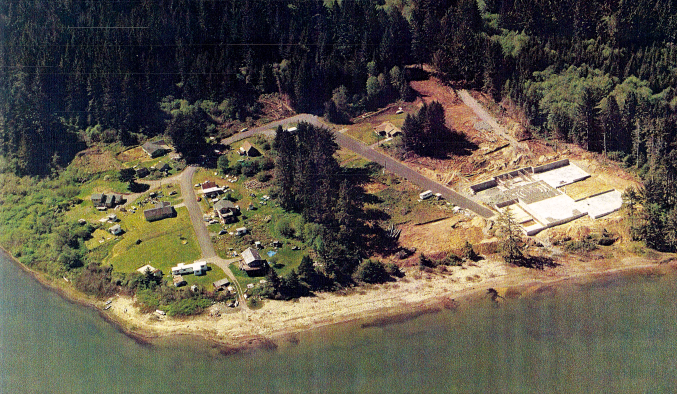 Construction of the Big Lagoon casino was halted in the late 1990s. | Source.

After years of negotiations and legal battles with the state and federal governments, Big Lagoon Rancheria has won the right to pursue a casino-hotel on its 11-acre parcel thanks to a federal appeals court decision affirming the tribe’s land ownership claims.

According to the L.A. Times, the ruling also clarifies property rights for more than 200 tribes nationwide, but locals will no doubt be most interested in the specific prospect of a casino-hotel on the banks of Big Lagoon. This idea, first proposed more than 20 years ago, has met resistance from neighbors, local officials and the State, which has been reluctant to allow a casino near the “environmentally significant State resources” in the area.

A previous (and now overturned) ruling by a three-judge panel of the 9th Circuit Court of Appeals offers a very readable and informative history of the conflict, which tracks a zig-zagging, often obscured path through the past century of government relations with native tribes. Here’s a brief summary of that narrative:

In 1918, the federal Bureau of Indian Affairs (BIA) purchased a nine-acre parcel near Big Lagoon as a homestead for a Native man named James Charley and his family. Charley himself was not the progenitor of the modern-day tribe. According to the ruling, Big Lagoon Rancheria’s roughly two dozen members “trace their ancestry, not to Charley, but to his son’s wife’s nephew.” The ruling explains:

Charley’s son Robert may have lived on the nine-acre parcel from 1942 to 1946, but the land was otherwise vacant for more than 30 years. In 1954 or thereabouts, Thomas Williams — Robert’s nephew by marriage — and his wife, Lila, received the BIA’s permission to camp on the land, but made no claim to ownership.

In the 1950s, the federal government sought to dissolve rancherias and distribute the lands to individual tribe members. California followed the fed’s lead in 1958 by enacting the California Rancheria Termination Act. An amendment six years later allowed any rancheria to request dissolution and distribution.

The Williamses apparently came to consider the nine-acre parcel a rancheria because they applied for dissolution and distribution in 1967. A 1968 BIA memorandum, by contrast, notes that the parcel “was not set aside for any specific tribe, band or group of Indians” when it was acquired in 1918.

This timeline is important because the State, in resisting Bear River Rancheria’s pursuit of a casino, argued that the tribe wasn’t technically “under federal jurisdiction” in 1934, the year the Indian Reorganization Act became law, and that therefore the BIA had no right to place an adjacent 11-acre site in trust, which it did in 1994. That 11-acre site is the proposed location for a casino-hotel.

The rancheria actually began construction of a casino on that site shortly after the BIA placed it in trust. Aerial images of that construction, taken in 1999, can be seen here. By that time, construction had been halted. The Humboldt County Board of Supervisors, in 1997, passed a resolution asking the Secretary of the Interior to step in and halt construction, on the grounds that the tribe hadn’t followed the necessary public review process.

Big Lagoon Rancheria, for its part, filed suit against the State in the early 2000s, arguing that government officials had failed to negotiate in good faith under the Indian Gaming Regulatory Act (IGRA). A district court agreed with the tribe, but that ruling was overturned on appeal.

Ten years ago, after much negotiating, the State and Big Lagoon Rancheria reached an agreement allowing the tribe to collaborate with another group and build a casino-hotel down in the ugly, arid (and non-Native) land of Barstow. But the California Legislature never ratified the agreement, and so it lapsed by its own terms in September 2007.

In the latest twist, the 9th Circuit affirmed the district court’s original ruling. In doing so, the 11-judge panel took issue with the State’s “federal jurisdiction” argument, which effectively called into question every post-1934 land deed to Native tribes. In the ruling issued Thursday, Judge Diarmuid F. O’Scannlain wrote that such retroactive challenges to long-settled land transfers “would constitute just the sort of end-run that we have previously refused to allow, and would cast a cloud of doubts over countless acres of land that have been taken into trust for tribes recognized by the federal government.”

The ruling means that, failing an appeal to the Supreme Court, the tribe’s casino proposal will be sent to the Secretary of the Interior, who will decide whether to modify, grant or reject it.

Reached by phone this morning, Big Lagoon Tribal Chairman Virgil Moorehead declined to comment on the ruling, instead referring us to the tribe’s Bay Area attorney Peter Engstrom, who emailed the following statement:

“It’s a meaningful decision. And it’s the right decision, by a unanimous and obviously thoughtful en banc panel. We look forward to the next stage in the Indian Gaming Regulatory Act process, which is for the court-appointed IGRA mediator to notify the Secretary of the Interior of the compact he selected, namely, that proposed by the tribe.”