Three of Those Safety Corridor Billboards Have Been Removed, And Not By Vandals 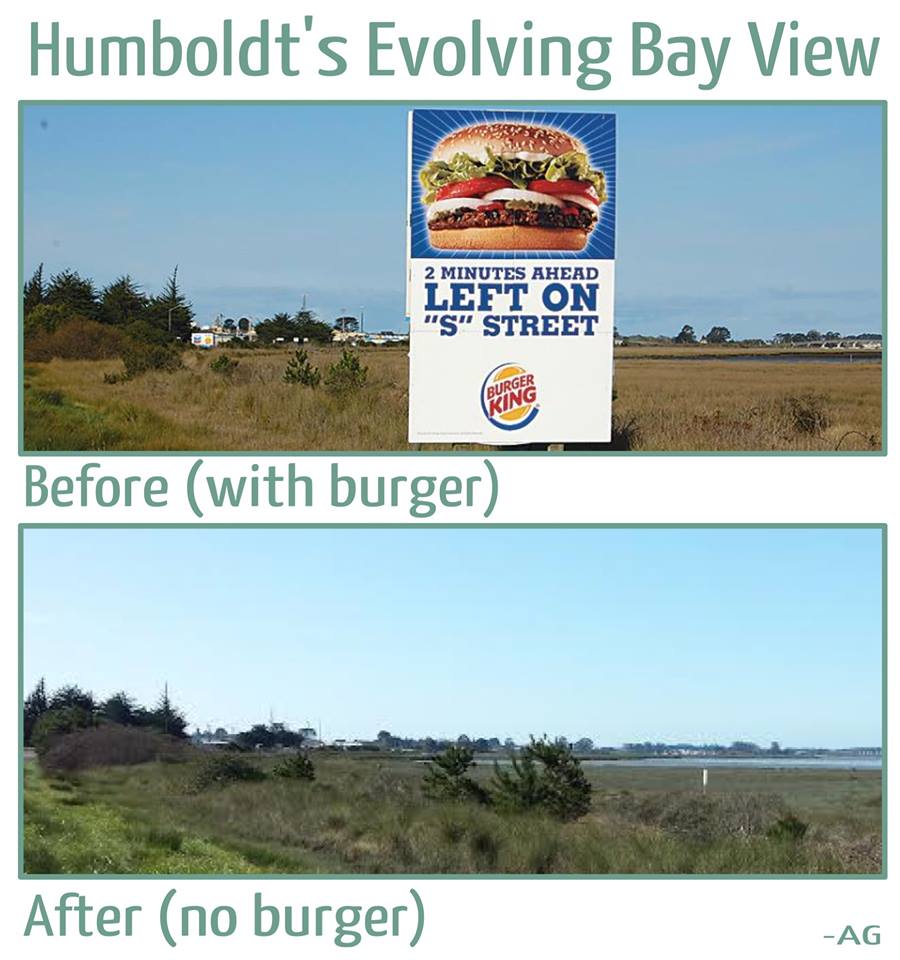 Three billboards along the Hwy. 101 corridor between Arcata and Eureka have been cut down — not by vandals this time but by the signs’ owners — a development sure to delight local activists fighting for removal of all billboards along that stretch around Humboldt Bay.

The signs were located on the north (bay) side of 101 between Airport Blvd. and the bridge over Eureka slough.

AllPoints Signs owner Geoff Wills owned one of the three billboards (the one pictured above, which had an AllPoints sign slapped on the back); the other two were owned by Moser Properties, according to government documents. But the actual property where these planks were erected is owned by the North Coast Railroad Authority (NCRA), a state agency that had revoked permission for the billboards. For reasons that remain unclear, Caltrans renewed those permits more than once, despite this lack of landowner permission.

Last October, the NCRA sent a letter to Caltrans (pdf here) officially asking for the permits to be revoked.

“[N]either of these owners [AllPoints and Moser] have NCRA’s current permission to maintain these structures on NCRA property,” the letter reads. “NCRA objects to these billboards being maintained on its parcels. … [T]he NCRA requests that Caltrans immediately revoke any and all active permits that it may have issued or renewed on the above-described property.”

Caltrans complied — eventually. On December 1 the agency sent a letter to AllPoints Signs owner Geoff Wills (pdf here) informing him that his permit had been revoked. A similar letter was presumably sent to Moser Properties. Caltrans gave the owners 30 days to appeal the decision, which they did not.

NCRA Board Member Richard Marks reported on his blog last month that Wills “respectfully requested reconsideration” of the decision to revoke the permit during the February NCRA meeting. Wills said that if that weren’t possible, he’d request a trade to allow him to put up a sign somewhere else along the corridor, in a different county if necessary, Marks reported.

Back in the fall of 2013 the California Coastal Commission ordered all signs along the corridor removed “to the extent possible” as a condition of approval for a Caltrans safety improvement project. That order has been — and likely will continue to be — the subject of legal battles between government agencies and Outfront Media (formerly CBS Outdoor), the corporate behemoth that owns most of the billboards.

But now there are three down. Those three reportedly were removed Sunday by employees of AllPoints and Moser Properties.

Moser Properties did not respond to a request for comment. Wills responded to an Outpost inquiry via text message:

I worked with NCRA for the past two months and couldn’t land a new lease so we removed them. Like I’ve said before, all this whining about boards and controversy does nothing. If we can’t secure new land leases then we take them down. … Sucks too, these were three small boards built in the 1940s that are the only boards that have maintained 100% local ownership since they were built.

Jennifer Kalt of Humboldt Baykeeper, one of the main groups fighting to get the billboards removed, rejoiced. She told the Outpost she’d left a message for Caltrans’ Region 1 office thanking them, and she said via text that she’s “looking forward to working together to get the rest removed from public lands! … This really shows it can be done!”