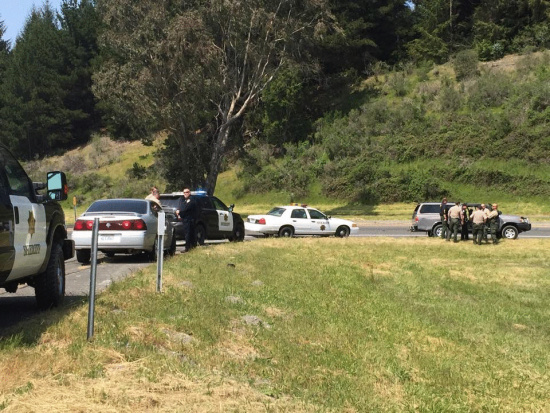 On Thursday, 04/30/2015, at about 1:20 pm, the Humboldt County Sheriff’s Office Communications Center broadcast a be on the lookout bulletin to local law enforcement agencies for a vehicle that was believed to be involved in a series of residential burglaries in southern Humboldt and northern Mendocino Counties. The vehicle was described as a grey Toyota Tundra believed to be occupied by two males and two females in possession of at least two handguns.

At about 2:00 pm, a Humboldt County Sheriff’s Office Deputy observed the vehicle travelling northbound on Highway 101 near Rio Dell, CA. The deputy began following the vehicle and requested assistance from the Fortuna Police Department to initiate a high risk felony car stop. Once assistance was provided by the FPD and a second deputy arrived to assist, the deputy following the vehicle initiated a traffic enforcement stop by activating the red emergency lights on his vehicle at the Hookton Road on ramp. All four law enforcement vehicles were displaying emergency lights and sirens, but the vehicle failed to yield. The pursuit reached speeds up 65 mph. The vehicle finally stopped on the Tompkins Hill Road off ramp.