UPDATE: 5/13/15 10:10 AM: Carson the Falcon is back home and eating chicken. Witness the Humboldt Wildlife Care Center’s celebratory Facebook post below.

Carson, our ambassador Peregrine Falcon has been found and is back in our possession… tired and hungry, he’s currently…

Posted by Humboldt Wildlife Care Center on Tuesday, May 12, 2015 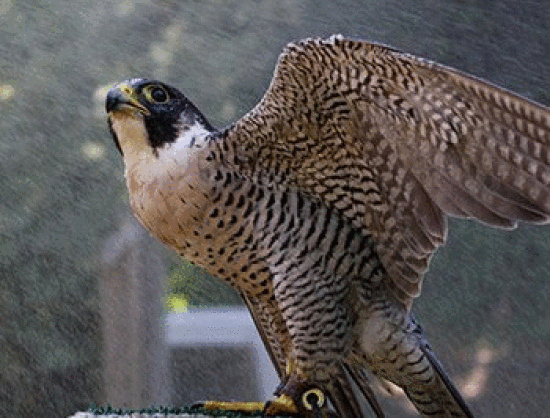 Carson, an 11 year-old peregrine falcon, somehow escaped during an educational presentation in Manila. “He was seen off and on all day, but he wouldn’t come to us because he probably wasn’t hungry enough,”Humboldt Wildlife Care Center’s Linda Parkinson told KHUM today. Hear the four-minute interview below.

Apparently, by hopping on and off his perch, the knot securing him came undone. He then headed for a nearby tree and wouldn’t come down to his handlers. At this hour, Parkinson is at the Arcata Marsh, where there were two sightings of a falcon with leather footwear.

“He has anklets around each leg, and then there’s a strap that comes down, the jesses, then they’re put together at a swivel base,” said Parkinson.

Parkinson said Carson came under HWCC’s care with as a juvenile suffering from a broken femur. Though he recovered, he didn’t get the requisite hunting practice. In other words, he’s a terrible hunter. His wildness is somewhat intact, though. “He won’t come home. We have to find him.”

Should you see Carson, please call Linda Parkinson (362-7484) and follow the bird if it’s safe to do so.

The peregrine falcon is the fastest living thing on the planet, period. “Clocked at 280 miles an hour in a stoop, diving on prey,” said Parkinson.