« Your Week in Ocean: Today’s Coastal Currents, In Which We Discuss Big Oil vs. The World

NCRA Approves Letters: ‘Get Those Billboards Off Our Right of Way’ 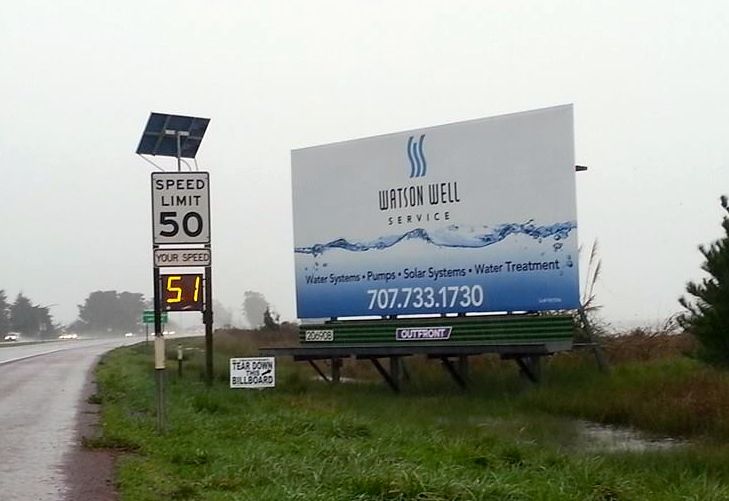 File photo of a billboard owned by Outfront media and a tiny protest billboard demanding, “Tear down this billboard,” erected by Arcata activist Dave Meserve.

At today’s meeting of the North Coast Railroad Authority (NCRA), the state agency’s board unanimously agreed to have staff draft letters to both Caltrans and Outfront Media reminding them, once again, that no one has permission to keep billboards on their right-of-way in the Highway 101 corridor between Arcata and Eureka.

The agency has said as much before. In October 2010, for example, the NCRA sent letters to Caltrans and CBS Outdoor, the company that then managed the billboards, asking for permits to be revoked on the five billboards that lie indisputably within the NCRA’s right-of-way along the safety corridor.

But recently CBS Outdoor rebranded itself as Outfront, somehow becoming a new legal entity in the process, and so according to Caltrans new letters needed to be sent to the “new company.”

NCRA Board Chair Estelle Fennell — one of two representatives to the agency from Humboldt County, along with Harbor District Commissioner Richard Marks — had some reservations about sending these new letters. “[Caltrans] is very well aware that we’ve said this,” she reasoned. “It’s been five years [since the last letters]. I wonder what this means. Why do they need another letter? Why are the billboards still up there? That’s my concern: Are we being asked to take another step that’s not necessary?”

Fellow board member John McCowen, representing Mendocino County, responded with a dig at Caltrans. “I’m willing to agree that it shouldn’t be necessary,” he said, “but we’re dealing with one of the most intransigent state bureaucracies that we have. So the quickest way around mulberry bush, I believe, would be to simply conform to what they say they need.”

The other board members echoed those sentiments, but Fennell remained reluctant, saying that if the agency does decide to send new letters it should at the very least remind Caltrans that they’ve been told this before. She said she was worried that “some legal issues or requirements” were behind this new request.

Marks broke in: “Madam Chair, with all due respect, I’ve been to the Caltrans office many times. … You’re assuming that they’re organized.” That’s not the case, he said, so if sending some more letters gets the job done then so be it.

Several members of the public got up and spoke, all of them thanking the NCRA for its actions thus far in getting billboards removed and thanking the board in advance for agreeing to send these new letters.

Board member Alan Hemphill, who represents Sonoma County, said, “Let’s just grit our teeth and get it done.”

Ultimately the board did just that, voting unanimously to send the letters in the hopes that these may be some of the last hoops they need to jump through before the boards finally get removed.