In Shelter Cove, Cultures Collide on Either End of a Disputed Coastal Trail » 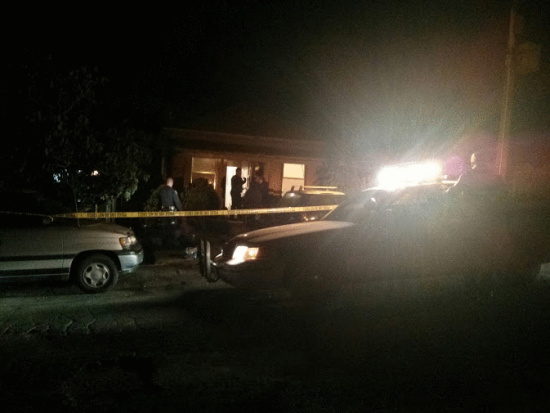 The scene of Saturday’s fatal shooting in Arcata. File photo by Diover Duario.

Late Thursday afternoon, Kimberly Lyn Steele called the Outpost and said she wanted to explain what really happened last Saturday night in the home-invasion robbery in Arcata that left 38-year-old Trevor Harrison dead from a gunshot wound. Or perhaps two gunshot wounds, as we would be told.

Steele said the press releases published in local media made her sound like somebody she’s not — a bad person.

Today Steele sat down and told her story in great detail, describing her own shock and fear when the drug deal she’d arranged turned suddenly, unexpectedly violent.

The Outpost will publish an extended version of our interview with Steele on Monday, but for now here are the essential elements of what she told us:

Steele said she’d been driving around the county all day with Robert Louis Huntzinger and Billy Joe Giddings, two men she’d recently been involved with in the course of her business — selling marijuana.

Late Saturday night, she said, they arrived at a house on the 2000 block of Eastern Ave. in Arcata, and she went inside with five pounds of “trim” (the leaves and stray fibers left over from trimming the buds), which she’d arranged to sell to Harrison’s mom, who lived there, Steele said.

She’d planned to go in alone, while Huntzinger and Giddings stayed in the car. “They weren’t even supposed to come in the house,” Steele said. But Giddings followed her in, she said, and almost immediately pulled out a handgun. “And he was telling all of us to sit down and shut up, give him our purses.”

Huntzinger, meanwhile, was trying to come in the front door, but Harrison was inside blocking his entry, Steele said. “Bob [Huntzinger] was struggling at the door with Trevor, and that’s when he [Harrison] got shot,” she said.

Giddings shot Harrison from roughly six feet away, Steele said, at which point Harrison slumped to the floor and Huntzinger entered the house. “And I can’t say for sure, but I’m almost positive that Billy shot Trevor two times,” Steele said.

According to Steele, Giddings struggled with Harrison’s mother over her purse while Huntzinger went into a back room and rifled around, apparently looking for something. “And Billy told him, ‘It’s time to go,’” Steele said.

The two men fled in Huntzinger’s vehicle, leaving Steele behind, she said. In fact, Steele said she remained at the scene well after several first responders had arrived. One of those responders had her stand out on Eastern Ave. to tell other responders as they arrived how to find the house, she said.

After standing there for several minutes, filled with confusion and fear, listening to a neighbor gripe about yet more trouble at this troublesome house, Steele simply walked away.

“And everybody’s saying that I fled the scene, which I did. But I didn’t just take off,” she said. “I just didn’t know what to do. After the cops came and the paramedics and everything, I just stood there like, ‘What the fuck just happened?’ You know?”

Monday, in the full-length interview, Steele explains the background on this fateful deal-gone-bad and describes her experience in the aftermath, which has left her ostracized, homeless and fearful.