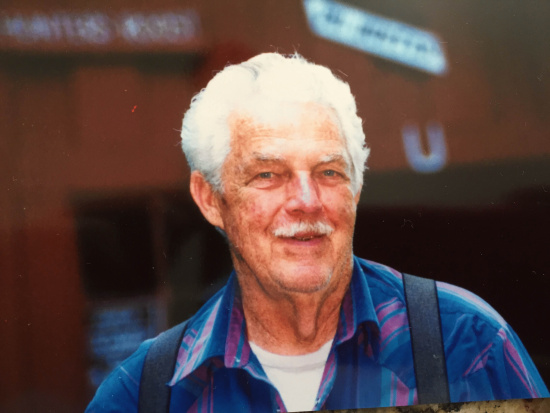 John Paul “Jack” Hunter passed away October 28, 2015 at Mad River Hospital with family at his side.

Jack was born on September 1, 1921 in Seattle, Washington to Paul and Fern Hunter. He was an only child and the family joke was they didn’t need any more children because he was perfect!  Being born during the Great Depression, the family moved a lot looking for work and were always pinching pennies -– a habit he continued throughout his life.

After graduation from Polytechnic High School in San Francisco, Jack enlisted in the 40th Naval Construction Battalion Seabees. It was there that he found out he was colorblind, which led to many good natured arguments over the years, especially with Grandma Glover.

In 1949, Jack married Eleanor Glover.  They bought the side of a hill from Everett Fountain in Salyer and together they built a home where he lived for the next 60 years. Jack worked most of his life for Caltrans as a heavy equipment operator, but was also known for his carpentry skills.

In 1986, Jack and Ida Lay were married in a beautiful garden ceremony, in the yard where he had worked so many hours.  Jack and Ida had many adventures over the years; traveling from Alaska to the Azores and spending many hours hunting for firewood in the mountains and agates on the ocean beaches.

He is preceded in death by Paul and Fern Hunter, Eleanor Cary and Davy Vigil.

Jack is survived by his wife Ida, children; Lori and Dave, Nancy and Paul, Ida and Tony, Norma, Teresa and James, several grandchildren and great grandchildren.

The family would like to especially thank Norma for being there day and night so Jack could stay in the home that he built and loved until the end.  Also thanks to Lee Duey and Jim Pelley for all the extra things they did to help Jack and Ida over the years.

A celebration of his life will be held at a later date.