« Big Rig Loses a Wheel at Broadway and Fifth

LETTER FROM ISTANBUL: Breakfast With the Sultans 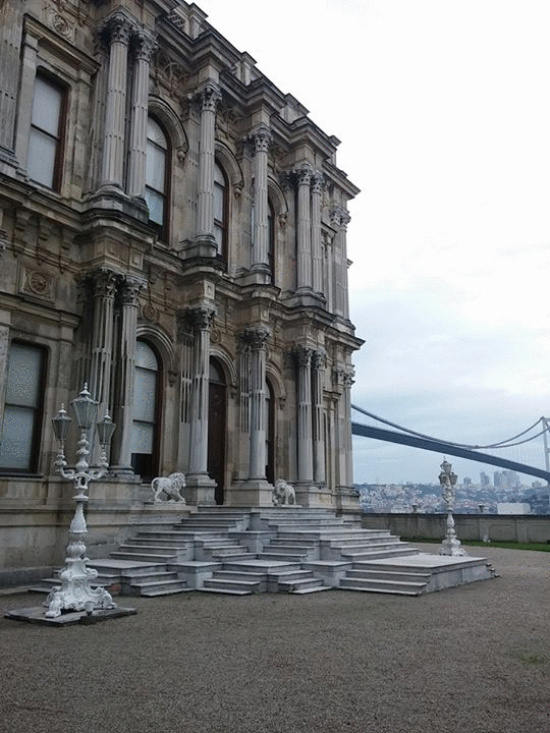 My wife Özge recently got a temporary transfer to Beylerbeyi, a palace on the Asian side of the city.

Located in the shadow of the Bosphorus Bridge, it was a summer house for the sultans, built in the late 19th Century by Sultan Abdulaziz. Beylerbeyi is smaller than Dolmabahçe, and far less busy.

Accustomed to thousands of visitors a day at the national palace, for Özge the relative tranquility of Beylerbeyi has been a blessing.

“At Dolmabahçe this wouldn’t be possible,” she said, as we sat having Turkish kavahltı in the harem garden on a grey, wet Sunday morning.

The cafe was nearly deserted, except for the obligatory stray cats, a half dozen of which crowded hungrily around our table. After breakfast, we made our way into the palace. I put on some galoshes to avoid sullying the carpets.

It was quiet in the official section. A small group of German and Japanese tourists were the only other people there, along with their guide.

Since Özge was my guide, we just strolled by ourselves.

“The design here is much more modest than Dolmabahçe,” my wife observed. “But remember, this was supposed to be just a summer house.”

We walked past the official section into the private section, past big dark wood cabinets, floor mats imported from Egypt (for the humidity in summer, Özge explained), and entered a spacious main hall. There was a vast empty pool with a fountain, which in Ottoman times was filled with water. By circulating the strong breezes of the Bosphorus coming in from the big windows, the pool acted as a kind of air conditioner, cooling the entire palace.

We continued on through a dining hall, various meeting rooms, and upstairs to the private apartments. My favorite was the Blue Reception Hall, with its gold-trim and blue stucco columns. On the ceilings of the sultan’s rooms were paintings (the sketches were said to have been made by Sultan Abdulaziz himself) of naval warships, signifying the sultan’s ambitions to construct a navy that could rival the great European fleets.

Indeed, the palace itself, like its bigger counterpart across the Bosphorus, was a symbol of 19th Century Ottoman ambitions. With the empire already in decline, the sultans desperately poured money into building palaces in the European style, to show that they could replicate, even improve upon, those of the ascendent West. The chandeliers, for example. In most of the palace, they were custom made in France and brought by ship to Istanbul. But the chandeliers in the Blue Hall, equally magnificent, were made in Turkey. Also, The intricate, dark wood paneling in the rooms were said to be assembled without glue or nails, a testament to equal, if not superior craftsmanship.

I asked Özge if all the furniture was original.

“Some of it is,” she said. “I asked the same question when I first came. Actually, some of it was museum-designed, while other pieces were brought over from Dolmabahçe.”

I wanted to take a photo, but you are not supposed to take photos inside the palace. Like in a museum, there is a certain protocal.

One of the security guards, a solemn, salt-and-pepper haired man, approached. He knew Özge, but offered me a curious, stern gaze.

Özge quickly introduced us. He offered a solemn, official hand.

“Why are you going through so quickly?” he asked Özge, reproachfully. “You should give your husband a proper tour!”

“Oh, he already knows most of it,” my wife said, laughing. She had given me a crash course a few evenings before.

The security guard chatted a moment longer. Presently, he left us, and returned to his solemn vigil.

We reached the rooms of Sultan Abdulhamid II.

As one the last sultans of the Empire, Abdulhamid lived under house arrest at Beylerbeyi for six years until his death in 1918.

Following their imprisonment at the palace, Abdulhamid and his wife were not allowed to leave the grounds. They were given rooms that in better times had belonged to the servants.

The German and Japanese visitors caught up, interrupting these thoughts.

“ – So the sultans intended this palace to be a summer home,” their guide said. “ But after the empire collapsed, and the modern Turkish state was established, it became a prison. It became a golden cage.”

We looked once more into the room. It was small, perhaps, but still larger than some apartments I have lived in. The sultan’s bed was still covered with the same bedclothes Abdulhamid died sleeping in; the rest of the room was rather sparsely furnished.

I thought it rather sad in a way; for Abdulhamid. He must have had a lot of time to ponder his fate, there in that room facing the Bosphorus, and that of his empire. He kept himself busy. From what I’m told, he was an accomplished carpenter; the ornate wooden chairs in one of the dining rooms upstairs were said to be his work.

His predecessors, just a few decades before, had enjoyed the spacious private rooms upstairs, and painted the halls and ceilings with their visions of future Ottoman glory. But there was to be no such future; all that was over. After the better part of a millennium, what little remained of what his ancestral brother, Fatih the Conqueror, had seized from the Romans. A bed in the servants’ quarters, with permission to walk in the nearby gardens!

Outside, beyond the walls, history marched onward, now forever out of reach.

We went outside and smoked cigarettes, watching the rain fall in the gardens. There were lovely terraced gardens, filled with more of the famous animal sculptures. But it was raining too hard then, with no signs of letting up.

I walked with Özge back to the palace entrance to get the.bus.

On the way back to Üsküdar, the bus passed under the bridge and wound along a pleasant street with a view of the gun metal-grey Bosphorus. Everywhere in the city it was a quiet, Sundaymorning. The day before, in Ankara, bomb blasts at a peace rally had killed reportedly 100 people. The president had announced three days of national mourning.

In that context, it felt strange, almost irreverent, to be taking a casual tour of Beylerbeyi, musing upon the ghosts of Ottoman past, while the pulse of modern Turkey was shaken by such tragic events. But in a couple of weeks, Özge is set to return to her normal job at Dolmabahçe, where the daily, tiresome throngs await. This could have been our only chance. With our different schedules, we don’t often get to have breakfast together, much less in the gardens of an historic palace.

It’s not every day you have breakfast with the sultans.

James Tressler is a writer whose books, including “Conversations in Prague,” and “City Scherzos: New Stories from Istanbul,” are available at Lulu.com. He lives in Istanbul.