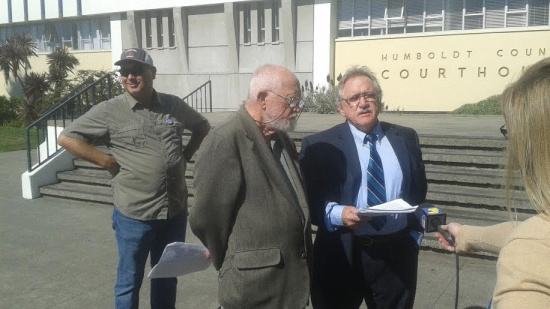 This election season got a shot to the ribs today as a local ship booster and his ship-boosting attorney filed a lawsuit against the entire Humboldt Bay Harbor, Recreation and Conservation District, and particularly against Second Division incumbent Greg Dale, who is running for reelection.

At a press conference on the courthouse steps this afternoon, neither Sears nor Bertain took too much trouble to deny the fact that their lawsuit is felicitously timed for the Nov. 3 election, in which Dale is being challenged by Rio Dell business consultant Nick Angeloff. Like both Sears and Bertain, Angeloff has been a strong supporter of the idea that the district should focus its economic development efforts on rehabbing railroad lines – or building entirely new ones – to the Port of Humboldt Bay, along with rehabbing port infrastructure to transform it into a player in international shipping.

The hardcore port development boosters are politically at war with the Harbor District’s current board of directors, who have turned their economic development efforts toward other industries – seafood processing and the like – after the port development craze of the 2000s nearly bankrupted the district. According to rail and shipping boosters, that shift has been a mistake.

“The election is in early November, and if this has an effect on the election, then so be it,” Bertain said of his conflict-of-interest suit this afternoon. “But the purpose of this is to bring it to the attention of the court and to get the matter resolved.”

Do Sears and Bertain have a case – even though they acknowledge that Dale scrupulously recused himself on all Harbor District matters having to do with his employer? Possibly, but they might have an uphill battle proving it.

The suit centers around several contracts between the district and Coast Seafoods, a large seafood company based in Washington. Those contracts include the lease of oyster bed space in Arcata Bay and a processing facility in the former pulp mill in Samoa, which the district acquired two years ago. They include, in addition, a $1.25 million loan that Coast Seafoods gave to the district to help finance the removal of mass quantities of hazardous materials left at the pulp mill site by its former owners.

Sears and Bertain accuse him – and the district generally – of having violated California Government Code Section 1090, which broadly states that local governments may not enter into contracts with the employers or businesses of those elected officials who serve on the local government’s board, if the board member in question can be said to have benefited financially from the contract.

Dale, they charge, can be said to have benefited financially because he is an employee of the company. Therefore, they say, he has an “interest” in the outcome of any contract negotiations. Despite Dale having recused himself from the Harbor District’s internal deliberations or voting on the Coast Seafoods contracts, therefore, those contracts were illegal. So long as Dale is on the board, they believe, any business between the Harbor District and Coast Seafoods is illegal.

The lawsuit seeks for all contracts between the district and the company to be declared null and void.

However, there are also various exceptions to the broad rule laid out by Section 1090, and it is here that Bertain and Sears will have to fight to prove their case. If the elected official has only a “remote” financial interest in a contract with a company that he owns or works for, then such contracts are perfectly legal.

The code contains many definitions of “remote” financial interests, but the one that is most relevant is codified in Government Section 1091(b)(2). An interest is remote, it says, if

If the lawsuit goes forward, it seems certain that it’s the last item on this list that will be contested most heavily. At least in common parlance, “officers” and “directors” of a company are usually members of that company’s board of directors, which Dale is not. It’s unclear what this particular section of law considers an “officer” or “director,” as it doesn’t seem to be defined in the statute. Bertain and Sears include as evidence that Dale is listed as an agent for service of process in the California Secretary of State’s online business entity database, but they will have to show that this means he is also an “officer” of the business.

Either that or they will have to demonstrate that Dale directly participated in shaping his company’s bid in the various contracts Coast Seafoods has with the district. The only evidence they include to this effect were statements allegedly made by Dale at a September meeting of the Fortuna Chamber of Commerce, in which he said that “he was the one who started the process of making the loan to the Harbor District.”

Dale himself showed up for the Bertain/Sears press conference this afternoon, and after it was over he expressed confidence that neither he nor the district has violated any laws. His only involvement in the $1.25 million loan, he said, was that early on he told the owner of Coast Seafoods that the toxic materials on the pulp mill site posed a threat to water quality in Humboldt Bay.

“I brought the issue up to the owner of our company, and that is well within our rights,” Dale said. He added that the district’s attorney has been well aware of his activities both as a district representative and a Coast Seafoods employee, and that they’ve been careful throughout to keep his actions on the right side of the law.

“This is a political stunt, and it is absolutely not a coincidence that these folks, who have been sending me these threats for the last month and a half, are doing this on the day that absentee ballots come out,” Dale said. “I’m pretty confident that the voters of the Second Division will see through this, and that they’ll move forward, and that we’ll have a decent election.”

Violations of Section 1090 are criminally prosecutable by local district attorneys, and California’s Fair Political Practices commission may seek civil penalties against elected officials who are deemed to have violated the law. Bertain said today that he had not yet notified either Humboldt County District Attorney Maggie Fleming or the FPPC of his client’s claim, but that he would do so shortly.