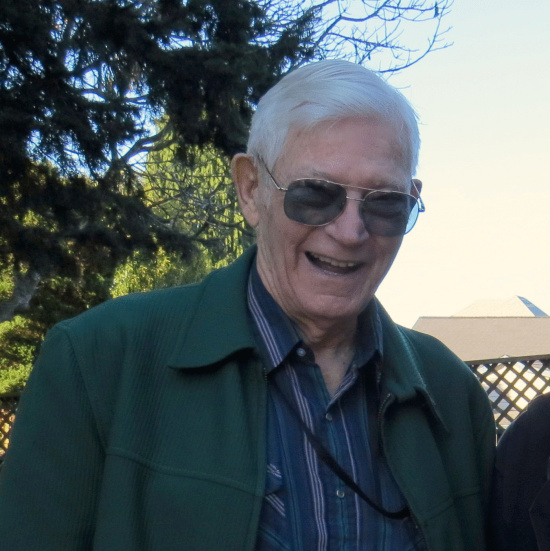 Born in Panhandle, Texas, on March 9, 1923, Ted married Frances Parsons on July 18, 1943, moving to Eureka in 1946. In 1976 they moved to Alaska, where Ted spent eight years working for the Federal Aviation Administration in native villages. Ted retired in 1984, and they returned back to their home in Eureka. Prior to working for the FAA (1958 -1984) he worked as an electrician for Hammond Lumber Mill.

Ted’s love and commitment to his wife, children and grandchildren were foremost in his life. Ted and Frances loved to travel in a motor home and were actively involved in Good Sam Club.

Ted was known for his generosity and kindness. He was an extremely talented and gifted problem-solver, and was able to fix anything and everything. He was a WW II veteran, member of the Boy Scouts of America (77 years), Masons (62 years) and the Elks.

Ted’s love for Ham Radios started as a young adult. He was a member of the local Ham Radio Club for many years. In 1955 he was certified with a MARS (Military Affiliate Radio System) station.

After his wife’s death, Ted continued to be involved in the community. One of his favorite activities was the Saturday morning “Slipper Club” at Hospice. Another highlight was going on the Honor Flight to see the WWII Memorial.

Memorial Services will be held Friday, October 9 at 1 p.m. at Sanders Funeral Home in Eureka. In lieu of flowers please donate to Hospice of Humboldt.

Ted’s youngest granddaughter, Alisha, wrote the poem below to honor her Grandpa.

That was my grandpa
He was a loving soul, with a kind spirit.
His hand was strong yet gentle.
His heart was overloaded with compassion and love.

My grandpa gave me many things,
But it is the special moments and memories that I hold close.
He taught me that anything can be fixed,
You just needed 5 of the right do-hickey’s because one was never enough,
…Or maybe it was because I would break things repeatedly.

He encouraged my spirit in small ways.
Like how I would walk through the door and hear him shout,
“Here comes the noisy one.”
Or how I was accused of “stealing” cookies.
And let’s not forget I am the great birthday thief!
Though, I like to think we shared it.
These are moments that mean the most.
They may not be extravagant to some
But to me they are my gold.
For with each of these moments I knew how much he loved me.
We had an indescribable bond.
From the small moments as I grew up
To different small moments as I watched him be a great-grandpa.
I didn’t understand how great his love was,
Though, I thought I did,
But see that’s what is special.
To see my son on his knee and him looking back at me,
Realizing in this moment, his love would never leave.

So to the man who promised he would live to 107,
I say to you,
It is not long enough.
Now it is our turn to carry you on,
And allow you to live.

To one of the most amazing men I know
Never forget how much I love you.
There is one last thing you can do for me,
Hold grandma’s hand as you continue to guide and watch over me.
I love you.