The Eel River Recovery Project (ERRP) is a grassroots group that uses volunteer monitors under the direction of trained scientists to collect data that help the community understand the health of the Eel River.  On Friday, September 4, ERRP was assisted by fisheries biologist and flow specialist Doug Parkinson in precisely measuring lower Eel River flows at Scotia and the main Eel and South Fork above their convergence at Dyerville.   The measurements, in combination with U.S. Geologic Survey (USGS) flow results from gauges throughout the Eel River basin, provide insight into current conditions and longer term trends.

Flow is widely recognized as the main factor affecting the Eel River’s health, and flows are at, or near, all time record lows as we approach the end of summer in the fourth year of record drought.  Despite less flow than last year at Scotia at this time, the lower Eel River in Fortuna is maintaining surface flow, whereas in 2014 it sank beneath a gravel bar and became disconnected.  Channel scour caused by 2014-2015 winter flows helped the river to down-cut and the deeper channel is keeping flow connected. 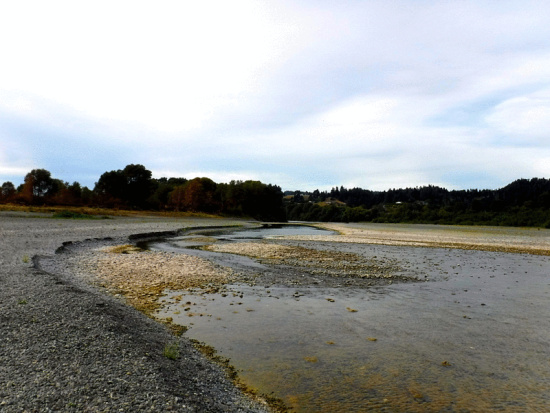 Flow at Scotia in late August appeared higher to ERRP volunteers than that listed on the USGS flow website.  When USGS scientists were contacted, they said their agency was more concerned with the accuracy of flood flow estimates, and that low flow data at Scotia was an index and not necessarily exact. USGS does not have gauge equipment for measuring river height because it would be subject to vandalism at low flow, and could be destroyed by flood flows.  Instead, they use a pressure sensing device in the gravel bed, which is then used to calculate flow.  ERRP asked Doug Parkinson, who has measured flow in rivers all over the United States, to collect more precise flows at Scotia for comparison and at two other locations further upstream. 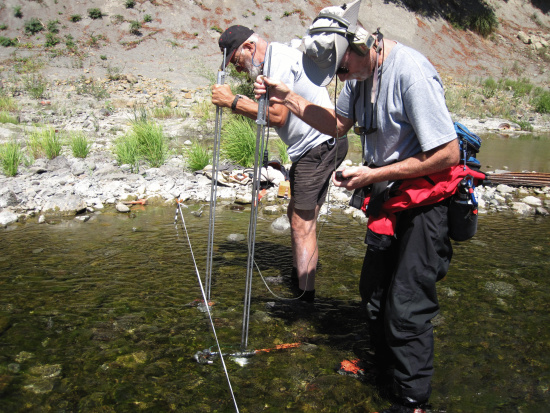 ERRP volunteer David Sopjes in the foreground operates the larger flow meter in the center of the channel while flow specialist Doug Parkinson uses a smaller meter for the edges of the Eel River at Scotia on September 4, 2014. Photo by Pat Higgins.

On Friday morning, September 4, Doug Parkinson met ERRP volunteers in Scotia and flows were measured just upstream of the USGS gauge location.  According to ERRP measurements, flow was 35.6 cubic feet per second (cfs), whereas the USGS gauge records at that location for the date range from 21 to 24 cfs.  This suggest the USGS gauge is reading about 35-40% lower than actual.  Parkinson and the ERRP volunteers then traveled to Dyerville to measure flows of the South Fork Eel River and the main Eel River above the convergence.

The South Fork flow was 12.3 cfs, while the USGS gauge upstream at Miranda fluctuated from 16 to 18 cfs.  Historically the South Fork was a gaining stream, with flows increasing as tributaries joined it.  If the Miranda gauge is reasonably accurate, then there are two plausible explanations for reduction in flow between Miranda and Dyerville: water extraction along the route, or a buildup of sediment in the stream bed causing more of the flow to be buried and flowing sub-surface within the river bed.

On the main Eel River above the South Fork, ERRP measured a flow of 12 cfs, while the USGS Ft Seward gauge on the same date showed flows fluctuating from 8.4 to 10 cfs.  Since there are some large tributaries that augment Eel River flow in the reach between Ft Seward and Dyerville, the two values are consistent and suggest that the Ft Seward gauge may be relatively accurate or possibly biased low.

The USGS website provides historic comparisons of low flows that are instructive.  The following are for gauge results on September 13, 2015 when this article is being written, and previous USGS record low flows for the same date.  The Scotia gauge has the longest period of record, stretching back 102 years, and its current estimated flow of 19 cfs is slightly more than the all time record of 18 cfs set in 1924.  Main Eel River flow at Ft Seward of 9.7 cfs is substantially higher than the low flow record of 1.2 cfs set in 1977. 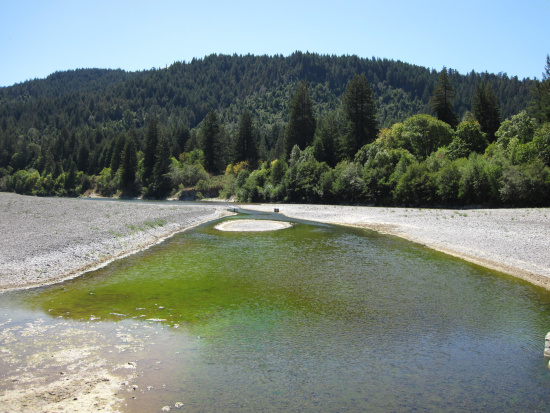 Looking upstream on the Main Eel River at Dyerville on September 4, 2015. Photo by Pat Higgins.

South Fork Eel River flows at Miranda are 16 cfs, with the previous low flow record of 12 cfs occurring last year in 2014.  The Leggett gauge reading of 10 cfs exceeds the record low flow of 7.6 cfs set in 2008.  Since 2008 was a moderately wet year, the record low suggests flow depletion above the gauge.  The Middle Fork Eel River at Dos Rios follows a more normal pattern.  Presently flows are only 2 cfs, with the historic low of 0.64 cfs occurring in 1994, an extremely dry year.

ERRP has a State Water Resources Control Board grant to monitor water temperature in partnership with citizen volunteers throughout the watershed and to photo document flow conditions.  A complete report on findings will be available in April 2016.  For more information, see www.EelRiverRecovery.org or call 707 223-7200. USGS flow website is: http://waterdata.usgs.gov/ca/nwis/current/?type=flow