INTRODUCING: SCANNER TRAFFIC INDICATES, the New LoCO Subsite That Tells You What Those Sirens Are For

Today the Outpost is pleased to launch the Internet’s newest feature – Scanner Traffic Indicates! This is the place on the Internet where all the things that Humboldt County scanner traffic has indicated are etched down for posterity. If you like listening to police scanners, stay tuned for a special offer near the end of this post!

But first: What is Scanner Traffic Indicates? 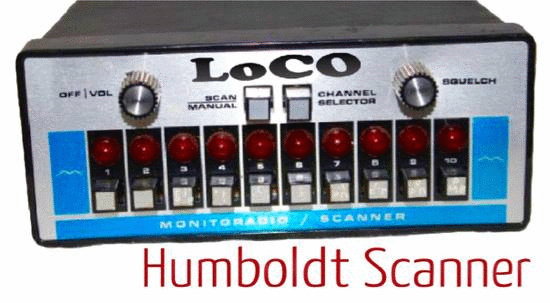 Sometimes scanner traffic will indicate that a man has kidnapped a baby and is parading down the boardwalk in the nude with a machete in each hand, but when police arrive it turns out to be only a tourist from Rancho Cucamonga picking his nose and trying to take a snapshot of a seal. That’s scanner traffic for you.

Ninety-nine percent of the things that scanner traffic indicate are too small and uneventful to investigate and write about. They don’t meet even the Outpost’s admittedly low postworthiness standards. Still: When the sirens whiz past you, it is only human nature to wonder where they are headed, and why.

Scanner Traffic Indicates will try to scratch that benign itch. It’s a daily parade of Humboldt County humanity as experienced through the radios of policewomen, firefolk and paramedics.

Let’s take a tour! It’s pretty simple. Near the top of each Scanner Traffic Indicates page you’ll see a “Launch the Scanner!” button. Click that open and emergency communications start streaming through your speakers. You’re listening to the northern Humboldt-centric stream; click the “Switch to SoHum” link and you’ll get the SoHum-centric one instead. (Though there is a lot of overlap.) Both of these streams come to us from Broadcastify.com, and both are originally provided by dedicated local volunteers who hook their actual, physical police radios up to the Internet and beam them to the world.

Underneath the header is a list of all the things we have caught scanner traffic indicating today. If you hover over one it will give you a permalink icon — you use that to get a permanent URL to share a particular item with your social mediaverse. We also have the LoCO’s CHP-bot note all new traffic incidents in here.

Up at the very top — above the graphics — you can scroll back to yesterday’s STI, or the day before that one’s.

Now, a lot of local media are doing something like this, in one half-assed fashion or another. The Times-Standard, for example, literally chains a person to a desk and superglues scanner-attuned headphones to their ears, Clockwork Orange-style, to crank out item after item after item for the paper’s Facebook wall. It is a brutal form of internal discipline used to punish reporters who fail the pee test.

Still, we understand that this is a fairly new phenomenon, and we have some concerns. To that end, Scanner Traffic Indicates has three rules:

Did I say something about “STI crew members”? Yes! We happen to know for a fact that there are dozens of people out in Humboldtia who love nothing more than to monitor emergency radio channels. We would like to offer those folks full membership in the Scanner Traffic Indicates community by giving them a login and allowing them to share whatever catches their ears during their listening day. (So long as they abide by the three-part STI code of conduct, above.)

If you’re one of the many people who have contacted me over the years with a tip they heard on the scanner, and you’d like a Scanner Traffic Indicates login, hit me up! I’ll give you a login and a place on our masthead, and you will have the undying gratitude of the LoCO readership.

If you want in and I don’t know you, here’s what you do. Beneath each Scanner Traffic Indicates day there are comment threads. Use those threads to audition. Hit us with a couple of posts over a series of a few days, and you’re in.