« Burglary Alarm Gives Away Man Who Broke Into Eureka Church; Deputies Not Fooled By His Fake Name

(AUDIO) Food For Thought: An Interview with The Guy Making Cannabis-Infused Vodka »

Faculty across the California State University system, including professors and lecturers at our own Humboldt State University, are set to strike in less than two weeks’ time over unmet salary demands, and an independent fact-finding report issued earlier this week has bolstered the faculty union’s position by recommending they get the five percent raise they’ve been asking for.

If the strike proceeds as planned, members of the California Faculty Association won’t show up for work April 13-15 and April 18-19. HSU is assuring students that the campus will remain open and some instructors will still hold classes. It also tells students no, you don’t get any sort of refund or discount on your tuition, and no, you won’t be excused for skipping school altogether on those strike days.

The fact-finding report (which you can read in full here) concludes that faculty raises are “in the interest of students, who need caring faculty and certainly in the public interest as our country needs a well educated population.” CSU administrators have been arguing (and continue to argue) that, with budgets damaged by the Great Recession, they simply can’t afford to meet the California Faculty Association’s demands. The report, authored by impartial mediator Bonnie Prouty Castrey, suggests delaying implementation of the raises for a year or two and reallocating money from other projects.

CSU counters that it can’t spend money it doesn’t have and instead proposes “a multi-year plan which could result in increases to faculty of 8.34% over four years.” [Emphasis added.]

In an effort to help people understand the issue — and to argue the faculty’s side — former Humboldt County bookseller/writer/friend of LoCO Deric Mendes prepared the infographic below, in his capacity as a political consultant and media manager for the CFA: 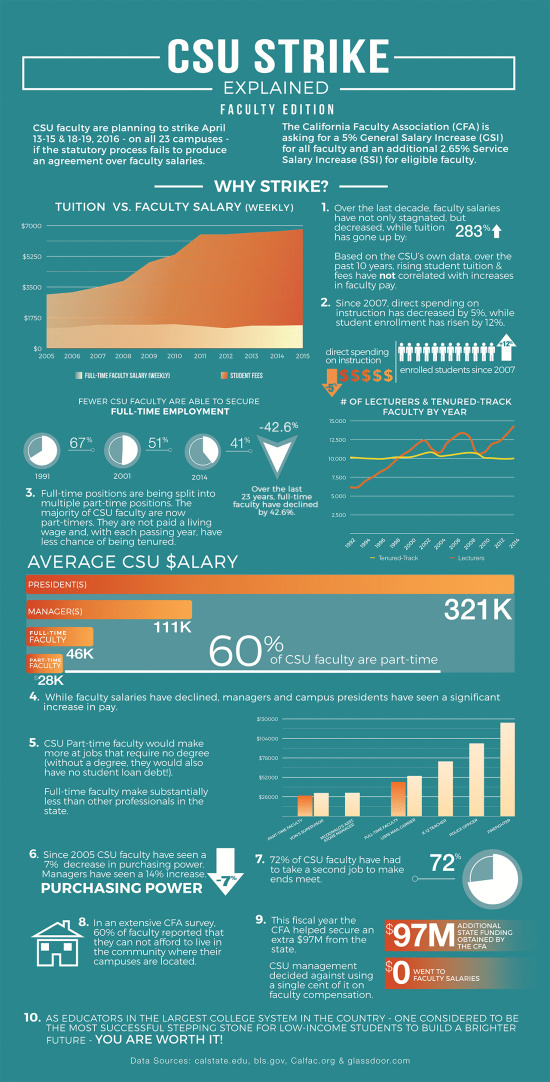 If you’re unable to read this, click here for the high-res version. | Source.

HSU has created a page on its website dedicated to strike info, including links to the fact-finder’s report and the CSU’s response.