LETTER FROM ISTANBUL: On Expatentialism 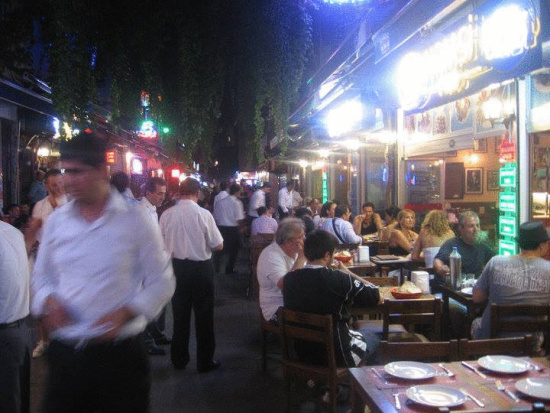 In Somerset Maugham’s “Of Human Bondage,” there’s a minor character by the name of Hayward. Hayward is a young dilettante when we first encounter him, a few years older than the main character, Phillip Carey.

Hayward at first seems an ideal role model for Phillip, a guide. He’s a bon vivant, an homme de monde. He likes to sit around for hours, preferably in a good pub or café, discussing poetry, philosophy and art. He’s an idealist, who seems to be on the verge of doing great things someday.

But we, the readers, are quickly warned off by a shrewd contemporary, doubtless the voice of the author himself.

“I’ve met a dozen like him,” he says. “You can find them all over Europe, idling their days away in the museums, from the Louvre to the Villa Borghese, in cafes from Paris to Milan, all of them with masterpieces reposing in their bellies. And it’s a shame, really, because not one of them will ever be written.”

Indeed, we come across our Hayward some years later. He’s balding, grown fat (from too many café meals, presumably), and listless. Ultimately, in one last ditch effort to “do something” with his life, he enlists to fight in the Boer War, only to succumb upon arrival to a rare tropical illness of the intestines.

Reading the book as a student, with my budding aspirations for the expat life, I always felt a little sorry for Hayward. I suppose I dutifully took his fate as the cautionary tale Maugham intended.

Years later, when I left America for Europe, bound for Prague, teaching and a literary career, I myself encountered many Haywards. For a time, I was Hayward, truth be told.

How does it happen, this “expatential” crisis? (Yes, I coined that phrase, aren’t you proud of me?)

Well, it happens the same way bankruptcy, in all its forms, hit Mike Campbell, the colorful, but ultimately sad drunk in Hemingway’s “The Sun Also Rises.”

“So how did you go bankrupt, Mike?” someone asks.

Yep, I had a lot of time to brush up on the classics, especially during my first year in Prague. Having come off a decade of hard work in the States – graduating with honors from university, then embarking as a journalist at a daily newspaper for the next four years – I arrived in the Golden City in the fall of 2004 ready for a lifestyle change. I wanted a bit of ease, a break from the 40-plus hour workweek, the nine-to-five, the pressure of deadlines.

And I soon got it. Upon receiving a teaching certificate, I found a job at the London Institute, a language school not far from Namesti Republiky. The teaching schedule was fairly light (about 20 hours a week), and I found that most days, I had a lot of time on my hands.

Initially, it was great. Prague is a small city, easy to walk around. Most days, after a morning lesson, I could get a tram to the center, have an English breakfast at Bohemia Bagel, a popular expat café, then go for a walk through Old Town down to the Vltava River. If the weather was fine, I’d take a book (preferably Kundera, Vrabal, Hasek, or one of the other Czech authors I was fast becoming acquainted with), and go to the Kampa, where lots of students from nearby Charles University went to lay in the grass and study. Or I’d find a place at one of the benches near the river, not far from the Rudolfinium, where in the evenings, for a few koruna, you could listen to the symphony perform the symphonies and conciertos of the great masters, from Mozart to Dvorak.

Other days, if it was rainy or cold, I’d find a good café or pub, and sit over pints of cheap, delicious Czech beer, and read and smoke endless cigarettes until it was time for my next lesson. The nice, convenient thing was that text message was really becoming widespread at the time, and I soon found that if I’d had a pint too many, or had simply arrived at a crucial point in the reading, that the lesson could be easily cancelled with a quick apology sent from the mobile.

Naturally, I worked at writing as well, occasionally penning a column to my old newspaper back in California, or else chipping away at what became my first novel, “Beyond the a.m. Crowd,” a product of too many late nights in smoky, over-crowded pubs, as well as excessive reading of the literary masters.

Gradually, then suddenly, the literary life — or expatentialism – began to catch up. Students complained about my admittedly lackluster lessons, and for a while I had trouble finding enough work. Attrition began to have its insidious way with my spirit, not to mention my wallet and liver. That I had actually done some work – that first novel was not merely reposing in my belly, thank you – was little consolation, especially when I found that I had drifted more and more to the canaille of Prague.

Eventually, the writing was on the wall. In the midst of the global economic crisis (what timing, eh?), I picked up for Istanbul, where a new teaching job, and much more than I ever expected – my wife Ozge – waited. From the moment I arrived, breathing in the salty, bracing air of the Bosphorous, I realized how in the years away from California, I’d missed the sea. The sea gives you a certain energy, I guess, or else it provides that necessary view of the absolute.

I charged into my new teaching position, armed now not only with a clean slate, but also experience and focus, not to mention as the hills of great Constantinople spread out in all directions, I felt with no small relief that I had finally shaken off Hayward, leaving him well ensconced at one of the pubs in Prague. No doubt he is there as we speak, illuminating some fresh arrival with his keen insight into post-Communist life in the city, which he will one day get around to memorializing in literature.

Meanwhile, for me, things were still up and down for quite a while, even after I settled in Istanbul. But they definitely have got better. I’ve stayed employed, and I’ve stayed busy. I’ve written a few books – and even sold a few. OK, a very small, barely quantifiable number, but enough to pay off a few outstanding debts.

Otherwise, you risk ending up like our poor Hayward, sitting at a café – the same one, whether it be in Paris, San Francisco, Prague, or Istanbul – drinking the same aperitif, looking out at the same sunset – it’s always sunset for Hayward – watching the world, and life, pass you by.

James Tressler, a former Lost Coast resident, is the author of the recently published, “City Scherzos: New Istanbul Stories.” He lives in Istanbul.