« Crab Time: Get Your Dungeness South of the Mouth of Humboldt Bay 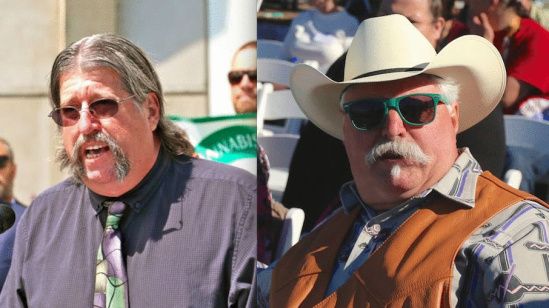 Marks says Mayo challenged him to a fight during a 10-minute recess in the meeting, and security guards came over to defuse the situation. “We were face-to-face,” Marks said.

Mayo, for his part, admits asking Marks to “step outside” during an animated argument but says he just wanted to discuss things further.

“In the hallway I said, ‘Let’s go outside and talk about it,’” Mayo told the Outpost before offering a bit of self-analysis: “You know how I am; I just tell you what the fuck I’m thinking.”

Here’s what led up to the argument, as best we can determine:

Marks had just gotten up to address the commission on the major issue of the evening, namely, whether or not to loosen up some zoning restrictions on land around Humboldt Bay to allow businesses that aren’t strictly dependent on the ocean. Marks and his allies on the Humboldt County Harbor, Recreation and Conservation District are in favor of the proposal (as he explained in an op-ed back in January) while Mayo and others are against. This latter contingent says the land should remain zoned coastal-dependent industrial to accommodate possible future industrial uses like, perhaps, the large-scale shipping they say might develop if we could re-establish a rail connection to the outside world.

The battle between rail-boosters and the Harbor Commission has gotten acrimonious, but what set Mayo off, he said in a phone conversation, was perceived procedural snafu on the part of harbor commissioners.

“They had a major Brown Act violation,” he said, referring to California’s open meetings law, the Ralph M. Brown Act, which is meant to ensure that public business is conducted in public, not behind closed doors.

During the public comment period, Marks was the third harbor commissioner to get up and address the Planning Commission, following Division 5 Commissioner Pat Higgins and Division 2 Commissioner Greg Dale. Mayo and others in attendance believed that this was a violation of the Brown Act. On a five-member commission, those three represent a majority, and the Brown Act prohibits a majority of a legislative body from discussing or deliberating on matters in their jurisdiction unless they do so at a publicly noticed meeting.

We’ll address the merits of that argument below, but first take a look at the video of Marks addressing the Planning Commission. While he spoke, Mayo and some of his allies (including attorney Bill Bertain and former Harbor Commission candidate Susan Rotwein) were seated behind him, and according to Marks they were talking loudly, interrupting and distracting him with their protestations about a Brown Act violation. At one point he turns and gestures at Mayo.

Mayo, who currently serves as an elected member of the McKinleyville Community Services District Board of Directors, insists he was simply trying to help Marks by giving him a heads-up that he might be running afoul of the law.

“I tried to let him know you can’t do that,” Mayo said. “All of a sudden [after his comments to the Commission] he turns around and starts givin’ me a ration of shit.”

During the meeting recess things continued to escalate. “Richard was bellowing at me,” Mayo said. “I said, ‘I was trying to help your sorry ass, you stupid motherfucker.’” Somewhere during this exchange he asked Marks if he wanted to step outside, but Mayo repeatedly denied having any desire to fight.

“I asked him to come outside and talk to me about it,” Mayo said.

“No, he wanted to do more than talk,” Marks recalled. “He said, ‘You wanna go fists?’ or something like that. I was like, ‘Really? We’re both senior citizens!’”

Several witnesses reportedly witnessed this encounter including Jerry White, a security guard with Securitas who was working at the county courthouse entrance. He remembers the two men emerging from board chambers, along with six or seven others, and engaging in an intense verbal argument.

“What I did hear [from Mayo] is, ‘Why don’t we take this outside?’” White told the Outpost, adding that he’s known Mayo for years. While the disagreement never turned physical, White said it seemed like a possibility. “I was close to that point of calling dispatch to have a [Humboldt County Sheriff’s] deputy come down,” he said.

At any rate, Marks declined the invitation to head outdoors and people went their separate ways. And today cooler heads are prevailing. While the two men disagree about what occurred, they both said they consider each other friends.

“I think the world of Richard,” Mayo said. “I’ve always had Richard’s back, and I’m not afraid to get in his face and say, ‘Knock it off.’” Mayo intends to apologize to Marks, he said, and he acknowledged that he can sometimes come off as a bit belligerent. “It’s just the way I am. I’m hot about stuff,” he said with a characteristic chuckle.

Marks also had kind words for his political adversary. “I highly respect him and have considered him a friend,” he said. But Marks also expressed disappointment in how fraught the local political atmosphere has become. “Why is it getting so ugly politically around here?” he said. “I have no idea.”

As for the alleged Brown Act violation, the Outpost spoke with Peter Scheer, executive director of the nonprofit First Amendment Coalition, who said there’s a specific exemption in the Act for this kind of situation. California Government Code section 5492.2 (c) (4) holds that a majority of a legislative body can attend a public meeting of another agency as long as they don’t “discuss among themselves, other than as part of the scheduled meeting, business of a specific nature that is within the subject matter jurisdiction of the legislative body of the local agency.”

Marks pointed out that the Harbor Commission had already decided on the issue in question, the proposed zoning amendment.

“So if they’re getting up and speaking publicly it’s not a problem,” Scheer said. A Brown Act violation would only occur if the three harbor commissioners met ahead of time, away from public view, to discuss and plan their comments.

“It’s important to bear in mind that all this took place very publicly and on the record, and that tends to mitigate a lot of the concerns of the Brown Act, which focuses mainly on actions public officials make behind closed doors, when the public isn’t watching,” Scheer said.

Not surprisingly, Mayo disagreed. After hearing Scheer’s argument and reading the code section he called the Outpost back.

“I think your man’s full o’ shit,” he said. “I read this as they only have the right to be there [at the meeting]. Nothing says they have a right to talk.”

Regardless, the most significant opinions last night were those of the Planning Commission, which ultimately voted 5-1 to reject the proposed zoning amendment. The ultimate decision will lie with the county Board of Supervisors.