Eureka Police Identify Man Who Died at the Hospital, In Police Custody, Saturday » 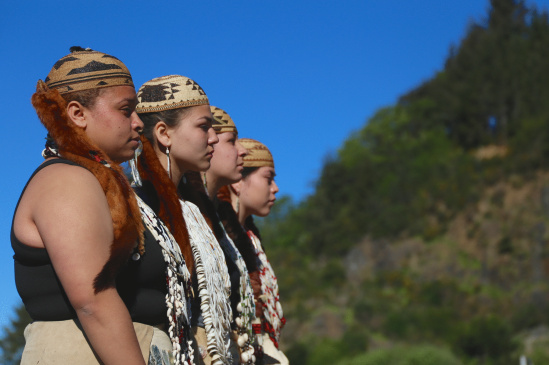 UPDATE, 2 p.m.: It was suspiciously picturesque at the mouth of the Klamath River today where your Lost Coast Outpost was lucky enough to attend today’s historic, star-studded signing of the Klamath Hydroelectric Settlement Agreement. We’ve posted a few photos from the event below and, farther down, full audio of the day’s slate of speakers.

While you soak in the imagery, listen to a song played at the end of today’s event. “How We Gonna Take Down the Iron Gate?” was written some years back by local songwriter Petey Brucker with hopes of inspiring, well, essentially what happened today. The recorded version, below, is enhanced by background vocals provided by the Arcata Interfaith Gospel Choir.

(AUDIO) “How We Gonna Take Down the Iron Gate?” 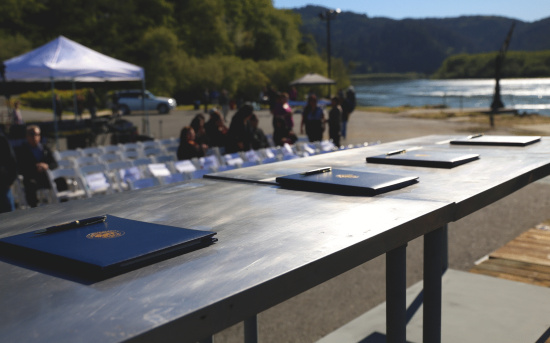 Today’s ceremonies were held on a stage made of boat docks while the Klamath Hydroelectric Settlement Agreement was signed, appropriately enough, on fish cleaning tables 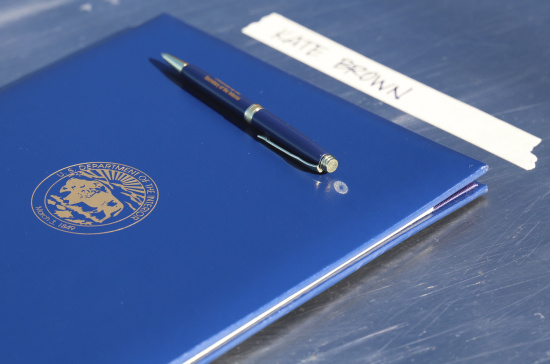 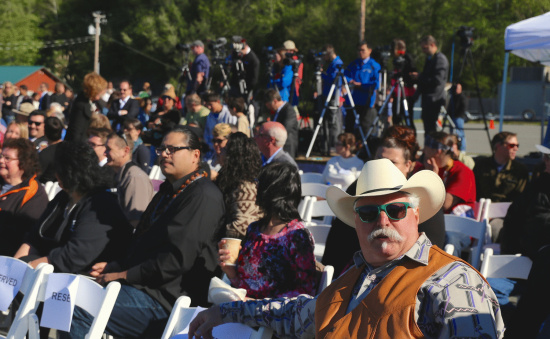 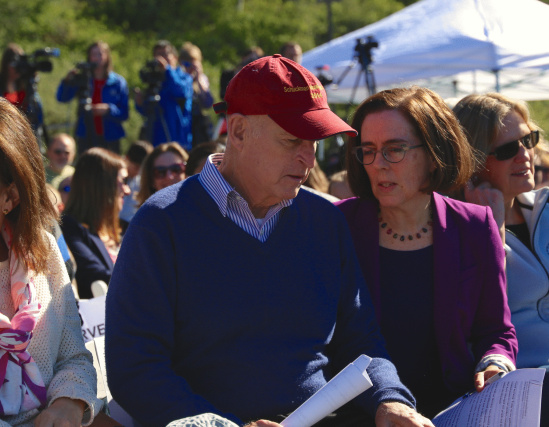 Governors Brown (Jerry of California and Kate of Oregon) 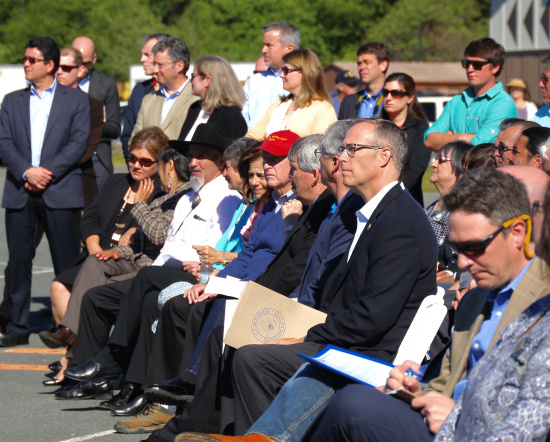 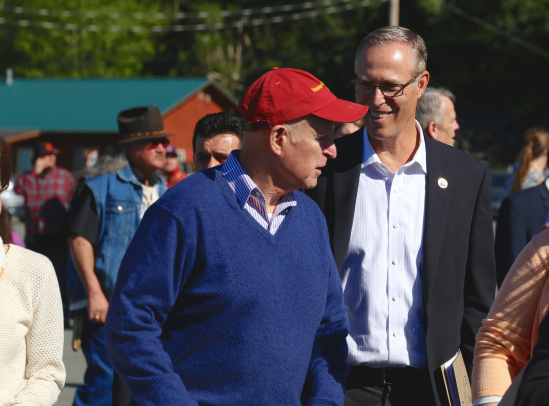 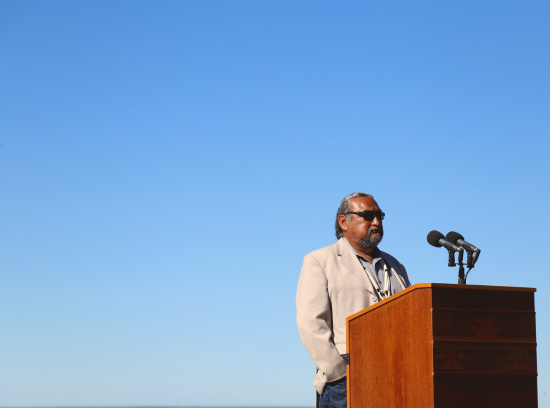 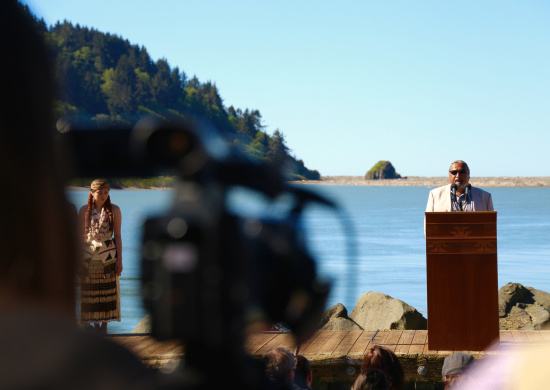 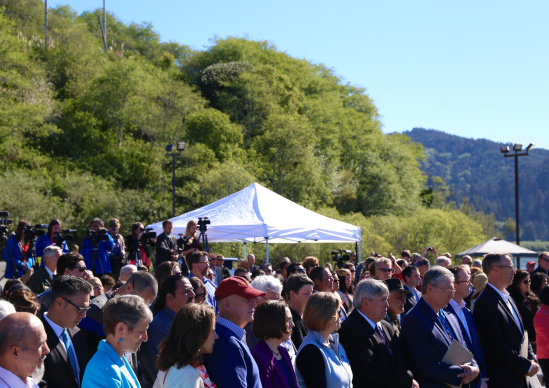 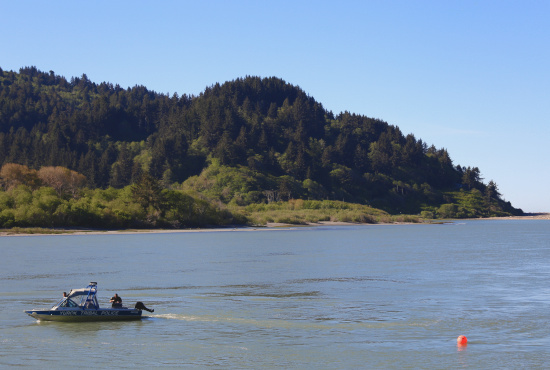 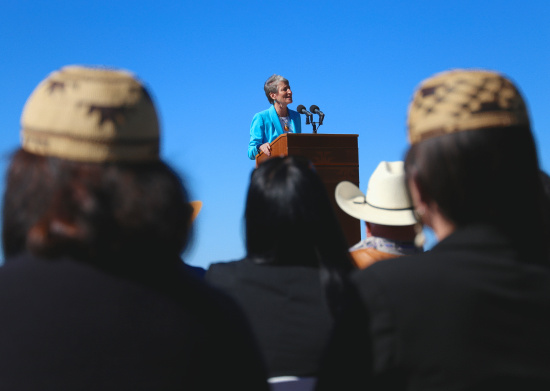 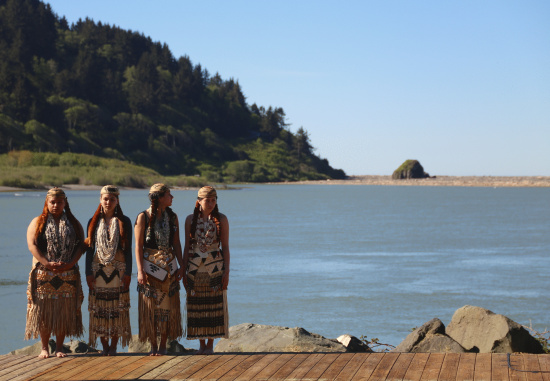 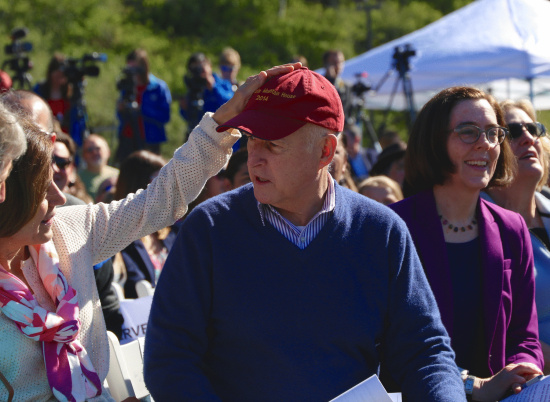 UPDATE, 10:43 a.m.: Full text of the newly amended and signed Klamath Hydroelectric Settlement Agreement and of a new agreement on upriver facilities below:

Original Post: The Outpost is at today’s historic announcement on the banks of the Klamath at Requa. Interior Secretary Sally Jewell, Govs. Jerry Brown and Kate Brown and many others are scheduled to being speaking shortly, and we’ll have pictures and more from the event later in the day.

In the meantime, the following announcement from the office of Congressman Jared Huffman — also at the event — just came across the wire: 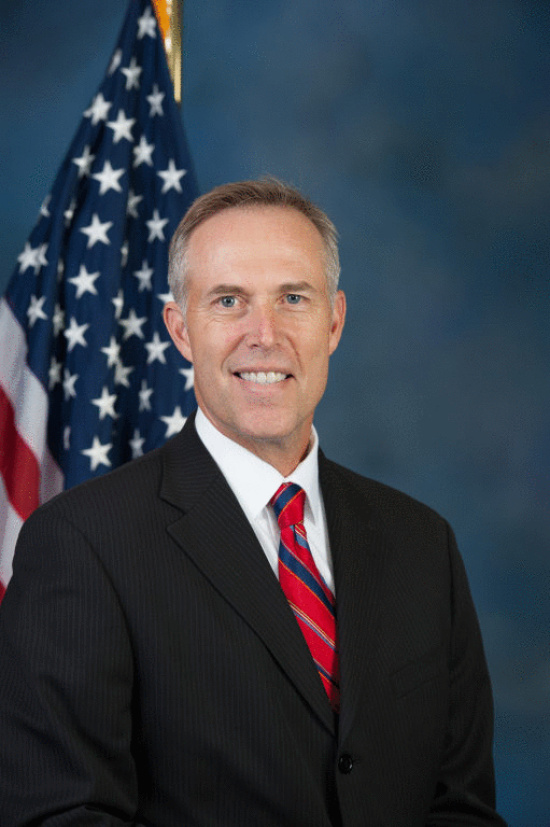 Today, Congressman Huffman (D-San Rafael) will speak at the signing of the historic Klamath Hydroelectric Settlement Agreement, along with U.S. Secretary of the Interior Sally Jewell and Interior Deputy Secretary Michael Connor, Governor of California Edmund G. Brown Jr. and Governor of Oregon Kate Brown. In response to this momentous step towards restoring one of the West Coast’s most iconic rivers, Congressman Huffman released the following statement:

“Today’s signing of this new agreement to tear out the Klamath River’s aging hydropower dams is truly a reflection of all the hard work done by tribal, fishing and environmental communities, who have fought tirelessly to tear down these dams and bring the Klamath River, along with it once famous salmon runs, back to life.

‘Tearing out the four dams on the Klamath will be a huge leap forward for the river. It will open up hundreds of miles of salmon spawning habitat, get rid of shallow reservoirs that trap warm water and cause algae blooms, and help finally repair a long stream of injustices to the tribes and communities along the river. I am thrilled I could be part of this historic event towards rebuilding the Klamath River.”

Congressman Huffman represents a key part of the lower Klamath River Basin, including several tribes, and has been very active on pushing for congressional action on the Klamath settlement. You can read more about his work here, and read his op-ed on the topic here.