You Don’t Have to Drive to Crescent City to Fly to Portland at a Reasonable Price Anymore, PenAir Says

When PenAir first announced, earlier this year, that they would institute direct flights between Portland and the California Redwood Coast-Humboldt County Airport, LoCO took the opportunity to run some numbers.

What we found was disheartening. Direct flights from Arcata to Portland and back cost a cool $400 (round-trip). Meanwhile, flights from Redding and Crescent City to PDX were quite a lot cheaper — $300 and $248, respectively.

What the what! We wrote:

It seems like there may be a scheme somewhere in here whereby you rent a car and drive it to Crescent City, fly to Portland and then book a flight to Redding on your way home but instead jump ship in Humboldt … but maybe we just don’t need to go to Portland that bad.

Well, it seems that people must have picked up our crazy ball and run it straight into the end zone, because today comes word that PenAir has dropped the price of its California Redwood Coast-Humboldt County Airport flights down to parity with our neighbors to the north!

Rather than drive two hours to Crescent City to catch a flight, customers in the Arcata/Eureka area can now fly from their local airport at a competitive rate.

Aha! LoCO ground-truthed this, by picking a random date in the future and comparing ACV and CEC priced. This is what we found. 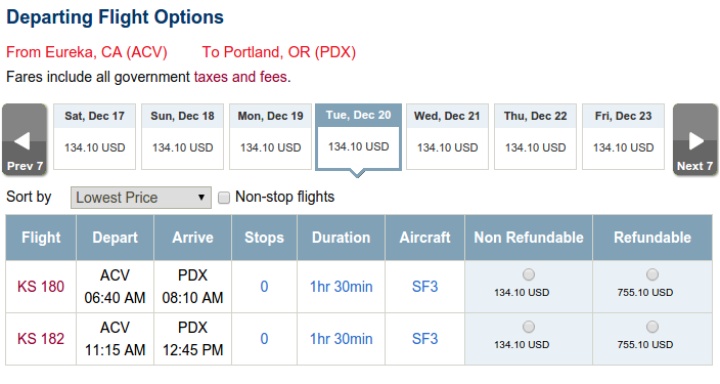 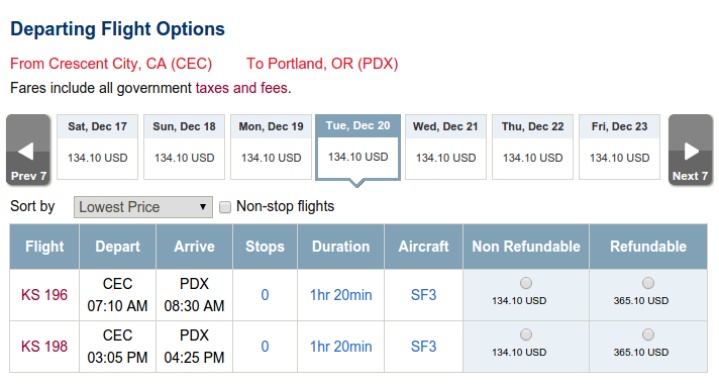 The prices, you will note, are exactly the same.

Also: If you order now, you can get tix for just $99 each way, PenAir. For reasons we cannot quite comprehend, this sale price is supposed to honor the U.S. Olympic Team.

PenAir began daily scheduled service between Portland, OR and Arcata/Eureka, CA on April 21, 2016. Today they will initiate new fares from Arcata/Eureka that are at competitive levels with the neighboring community of Crescent City, CA.

Rather than drive two hours to Crescent City to catch a flight, customers in the Arcata/Eureka area can now fly from their local airport at a competitive rate.

This fare reduction runs in conjunction with a travel special PenAir published on social media in honor of our athletes in Rio. Fares two/from Arcata/Eureka and Portland have been marked down to $99 each way.

Go for the GOLD!

All fares and specials are available at PenAir.com, on several online travel agency sites, and by calling PenAir’s Central Reservations at (800) 448-4226. These fares are also available on PenAir’s codeshare partner’s website at AlaskaAir.com.