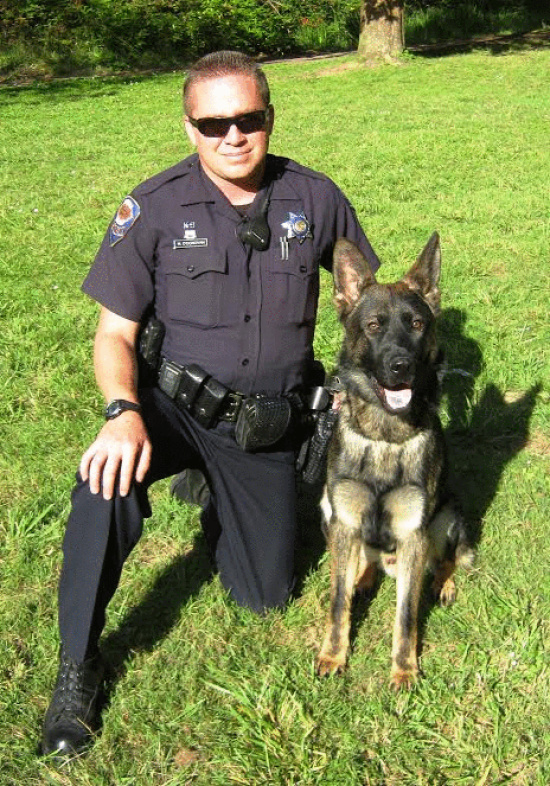 Arcata Police Department’s newest K-9 member and his human partner are proud graduates of the Witmer-Tyson Imports Basic Handlers Course. Baron and Officer Matthew O’Donovan learned to work together during the monthlong course in Menlo Park, training for tasks such as suspect apprehension, handler protection and building and area searches, just to mention a few, and graduating July 29 with a Peace Officer’s Standards in Training qualification.

It was a GoFundMe campaign that brought Baron to the Arcata Police Department, along with generous donations from citizens and local businesses.

The Arcata Police Department’s K-9 Unit has played a vital role in tracking and apprehending criminals, including violent offenders, since the 1970s. K-9s can search buildings and residences when alarms are triggered or when doors or windows are discovered unsecured. The dogs help save lives, boost crime prevention efforts and strengthen the relationship between the police department and the community.

A sable-colored German Shepherd, Baron was born and raised in the Czech Republic. His breeder, a Czech police K-9 handler/trainer, began Baron’s initial training in obedience and protection work before Witmer-Tyson Imports brought him to the U.S. Officer O’Donovan and K-9 Supervisor Sergeant Sligh selected Baron for his temperament and drive.

Aside from purchasing and initial training, the APD budgets $6,000 a year for bi-monthly K-9 training for both of its K-9 teams. It also pays for the dogs’ food and budgets money for the their veterinary care. The Sunny Brae Animal Clinic has generously donated one year of free care for the K-9 Unit. Overall, Baron and Zari are the least expensive full-time employees of the City of Arcata.

The two K-9s live at home with their handlers and their families. At the end of a K-9’s career, the dog is sold to its handler for $1 and lives with the officer in retirement.

Now Baron needs a bullet- and stab-proof vest. The Lost Coast Kennel Club has kicked off a fundraising campaign with a generous $500 donation towards the $2,400 cost of the vest. If anyone from the community would like to contribute toward Baron’s work vest, they can make a donation at the Arcata Police Department or send a donation by mail to APD, 736 F Street, Arcata, CA.

The Arcata Police Department would like to thank everyone who has contributed to Baron’s fundraising campaign. Without the community’s support, APD would not be able to continue providing the high level of service to which Arcata citizens and business stakeholders have become accustomed.