This protected cove south of Trinidad Harbor has a diverse beach structure with sandy nooks, great agate patches, and multiple easy tidepooling locations.Enjoy this 360 immersive moment at a spot that is usually underwater.

Go ahead and click that video above. Click-and-drag. Have a look around — left, right, up, down. Make sure the sound is on while you pan right to see waves crashing against the rocks, or tilt down to look at the tide-pools near your — hey, wait, why don’t you have feet?

No matter. Put this thing on full-screen mode and watch it a couple more times. The 360-degree/spherical video —captured by a new kind of immersive, virtual reality-style camera — allows viewers to look in whichever direction they choose at any time. This particular video was shot south of Trinidad Harbor in a little cove that’s usually underwater.

“When the current generation [of spherical cameras] came out I realized we could afford to get into this and produce content worth viewing,” Whitcomb said in a recent phone interview.

There was a fairly steep learning curve, he said. It’s not like shooting static photographs. But the more he played with the gadget the more ideas he started having about how to use it. He decided to focus his efforts on capturing the beauty of our local region.

Whitcomb is a local — several generations of his family hail from Rio Dell — and he described himself as “one of those kids who never wanted to leave.” He loves it here, but he and his fellow employees at STIL have noticed that not everyone feels the love.

“Eureka suffers from a morale problem,” he said. People talk smack about the city constantly, and Whitcomb admits that there’s often good reason to be frustrated. His shop has been located on Broadway since 2001, and he said “stuff gets stolen all the time.” A good friend recently moved out away largely due to the negativity surrounding Eureka.

But Whitcomb and his partner (in life and in business) Jennifer McMahon find plenty to love about the area, and they want to help others see their point of view.

“By simply changing our perspective on the way we see our community we’ll change the way we interact with it,” Whitcomb said. 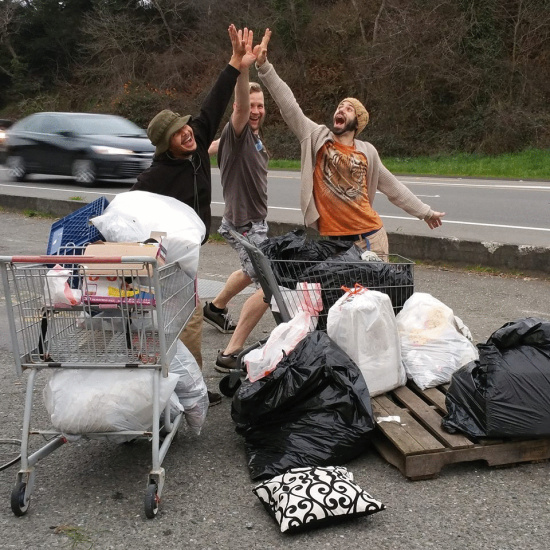 Whitcomb and his STIL colleagues celebrating a big trash haul. | Image from Facebook.

He founded local tattoo and piercing parlor Primal Decor in 1995. McMahon founded Humboldt Roller Derby from their couch and has run Primal Decor for the past decade. In an effort to further improve the county, STIL employees have begun regularly picking up trash along Broadway, and in the process their own morale has improved.

Whitcomb was hesitant to frame the situation this way because he didn’t want to sound too preachy, but he hopes to use his new immersive video camera to help other locals focus on the good as well.

In particular, he’s excited by the prospect of allowing people to visit locales they might not otherwise be able to reach — the handicapped and elderly, for example, who might not be able to hike down to, say, Baker Beach.

But the camera has other promising uses — sporting events, for example. Below is video of runners crossing Little River at Moonstone Beach during the Trinidad to Clam Beach run held earlier this month.

Water Crossing at the Trinidad to Clam Beach Run:The signature of this event is the crossing of the Little River at Moonstone Beach. The only other year we have been here, which was last year, it was not much of a stream let alone a river. But today it was very “riverly” with thigh high water and a swift current. Thank you to the volunteers who stayed focused on our safety while cheering us on heartily.Here you can enjoy the crossing in full 360 video. Be sure to scroll all round and see everything that is going on both in front and behind us. Maybe you will see something we didn’t…

And here’s video shot from the middle of the track during the last Humboldt Roller Derby bout:

Saturday night was an awesome night of roller derby action, courtesy of Humboldt Roller Derby. We welcomed the skaters from Visalia’s V-Town Derby Dames for the main event, skating against our very own Redwood Rollers! And for the first bout we had the local rivalry, North Jetty Betties vs. The Widow Makers.Here is an immersive 360 view of a particularly exciting jam. Visalia is in red and the Rollers are in black. Starting off with the sounds of the Dirty Derby Blowhards, we see V-Town’s jammer getting the lead early, but you can see in the video that she gets called on a track cut sending her to the penalty box. This opens up the jam for the full two minutes and chaos ensues, including a helmet panty pass near the end. Enjoy :)

Whitcomb said that if people really want to get an immersive experience they should check out the Google Cardboard app, which allows people to strap on their smartphones like goggles and look around in these spherical videos simply by moving their heads.

“By using social media to celebrate Humboldt County, it’s a good way to balance the negativity,” he said.