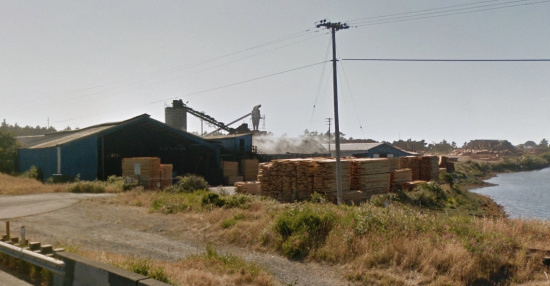 And another one gone. Humboldt County’s timber industry continues its long and steady decline with the following announcement from Sierra Pacific Industries:

“This is a particularly sad day for Sierra Pacific and for my family” said A.A. “Red” Emmerson, chairman and president emeritus of SPI. “Our company started in the Arcata area when my father and I leased our first mill there in 1949 near Jacoby Creek. We went on to build the Arcata mill on the Samoa Peninsula, which we’ve run steady since 1951,” he noted.

About 123 crew members will be affected by the closure. According to SPI [Sierra Pacific Industries], reduced harvests of suitable timber and regulatory burdens are the primary reason for the closure. That, combined with a difficult lumber market have profoundly impacted operations in Arcata.

“A fall-off in the amount of suitable timber for sale in this area, coupled with flat home construction in the U.S., and increased lumber imports from Canada have all played a role in our decision to close the mill” said SPI spokesman Mark Pawlicki. “But, make no mistake, the largest factor was that the type and size of logs that this mill cuts are simply not available in ample supply to continue to run the mill,” he added.

“When combined, these factors leave us no choice but to close the plant,” said Pawlicki. In an effort to keep the Arcata mill running, SPI has been transporting logs from the interior of California, and has barged logs from British Columbia and Washington. However, those efforts proved to be uneconomical.

Sierra Pacific is a strong, growing company and has job openings at other locations. Crew members are being encouraged to consider opportunities at these locations, and relocation assistance will be offered for each person who is approved to transfer.

Sierra Pacific Industries is a third-generation family-owned forest products company based in Anderson, California, employing over 4,500 crew members. The company owns and manages 1.9 million acres of timberland in California and Washington, and is among largest lumber producers in the U.S.

Sierra Pacific has 13 other sawmills operating in California and Washington, and has started construction of a new mill in Shelton, WA. The company also has window, renewable power, sales, and lumber remanufacturing facilities in operation in multiple states.

Sierra Pacific is committed to managing its lands in a responsible and sustainable manner to protect the environment while providing quality wood products for consumers.