« If You Want to Be a Bookkeeper, Landscaper or Construction Worker, the County Can Hook You Up With Training

Eureka Looks to Youth for Ideas on City’s Future 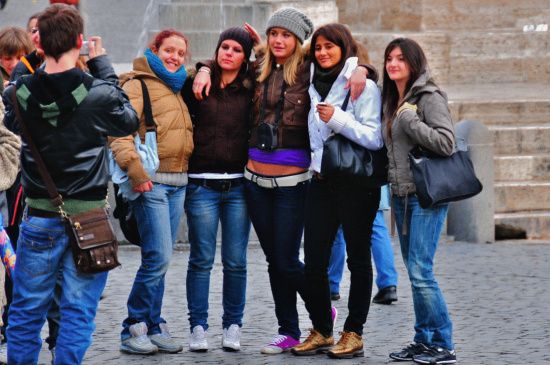 An image that comes up when you Google “young people.” (Source: Wikipedia.)

Young people are often invoked at government meetings (typically with clichéd questions about the sort of future we’re leaving them), but it’s less common to see them actively engage in the civic process.

Eureka Community Development Director Robert Holmlund hopes to change that with a meeting aimed exclusively at city residents between the ages of 16 and 30. The Next Generation Eureka (NGE) Kickoff Meeting coming up Wednesday evening will encourage these young folks to contribute ideas for the city and discuss projects currently underway.

Holmlund said the idea occurred to him after noticing that a certain demographic seems to dominate community meetings.

“We do a lot of public meetings,” he said, “and in all of them I try to pay attention to the different demographics to see whose voice is being heard. And in several meetings in a row the average age was somewhere in the high 50s.”

Which isn’t to say that a 50- or 60-year-old person is, you know, old, Holmlund quickly added. “But for an average age it made me feel like the next generation was underrepresented in voice in these public meetings.”

As if to hammer home the point of the youth as an underutilized resource, an 18-year-old young man soon came in to City Hall looking into the particulars for a business he wanted to start. Holmlund struck up a conversation with him. “He had a lot of really cool ideas,” he said.

The two talked about the waterfront, the city’s General Plan Update and the young man’s own concepts about what would make Eureka better.

“I said, ‘It’s great to hear from someone who has a long-term stake in the future of Eureka, who will be around for the next 40 years,’” Holmlund recalled.

The guy said he could round up some of his friends for a larger discussion, and Holmlund decided to open it even wider. Wednesday’s meeting will be held at the Wharfinger Building, with pizza and beverages provided. And while Holmlund understands the temptation, he said he’d rather not see parents and grandparents attending with their reluctant wards in tow.

“I’m really pushing for this to be attended primarily if not exclusively by people [age] 16 to 30,” he said. To that end, anyone attending who’s not in that age range is being asked to “bring at least four people who are.”

See the poster below for details. 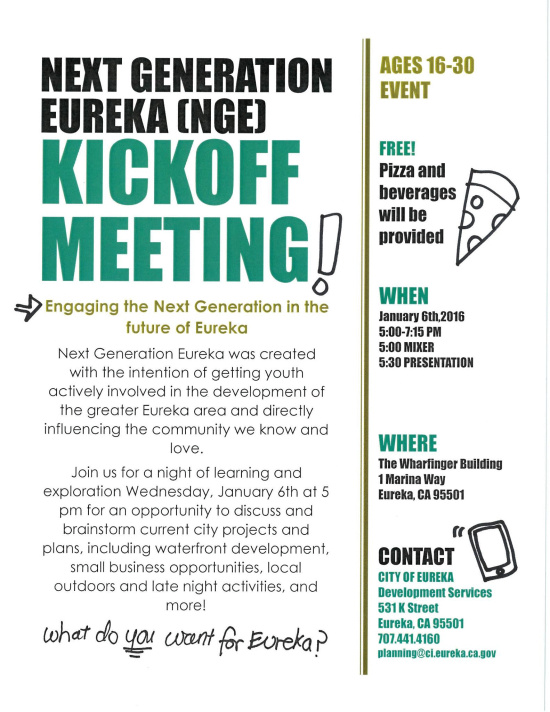