Supervisors Rush to Craft Marijuana Ordinance That Covers the Basics 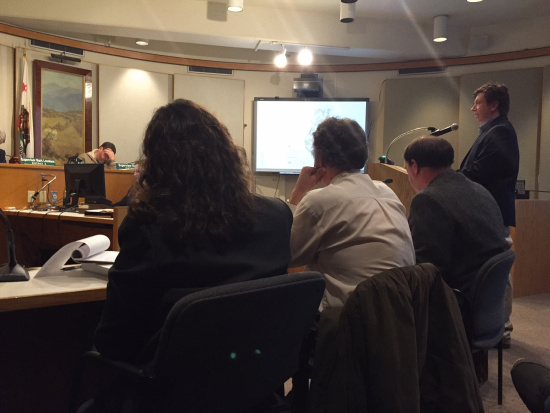 Yesterday the Outpost offered a slimmed-down report on the slimmed-down medical marijuana ordinance being crafted on-the-quick by the county Board of Supervisors. Today we’ll look at some of the particulars of the situation, including the governmental constraints facing the board and public concerns about the pending ordinance, plus an update from Assemblymember Jim Wood on the deadline mistakenly included in his bill — a deadline that’s largely responsible for the board’s hurried approach.

Much of the story can be divined from the county staff report prepared for yesterday’s agenda item. The main takeaway from that report was this: The draft ordinance prepared by the county Planning Commission over the course of 10 pubic meetings is simply too expansive in its cultivation concessions — the allowances it would grant growers and property owners — to qualify for the fast track of state environmental law.

Because when it comes to the California Environmental Quality Act, any project that deemed to have a significant impact on the environment must go through a lengthy environmental review process. With a March 1 deadline mistakenly inserted into the statewide Medical Marijuana Regulation and Safety Act (MMRSA), the county needs its ordinance to be lean and mean in order to qualify for the much simpler mitigated negative declaration (MND) process, an assurance that the project will not have significant impacts to the environment.

The county set out to do something pretty ambitious — namely, establishing the areas in the county where a host of medical marijuana-related activities would be allowed, from cultivation, processing and manufacturing to distribution and sales. It also aimed to set up a permitting structure so the county would have oversight of these commercial activities.

Yesterday, Senior Planner Steve Lazar said the county has received 315 application forms from locals in the medical marijuana field looking to register their operations. While that no doubt represents but a small fraction of the local industry, it was greeted with applause in supervisors’ chambers as a good indicator for the future.

However, the March 1 deadline is forcing the county to scale down its draft. In a phone conversation with the Outpost this afternoon, Assemblymember Jim Wood said his top priority since the end of the last legislative session has been to delete that date from his bill, Assembly Bill 243. As currently written, the bill says cities and counties that don’t have their own regulations in place by March will permanently cede regulatory control to the state.

Wood said the date was in his bill as originally drafted, but his office submitted an amendment to remove it when the bill was in the Senate Appropriations Committee. However, when the three bills that make up the MMSRA were gutted and repopulated in a last-minute legislative push, the date found its way through while the amendment did not.

In the current legislative session, Wood has introduced Assembly Bill 21, which would eliminate the deadline. He said the bill will be assigned to committee tomorrow with a committee hearing hopefully soon to follow. “And then we’ll be off and running,” he said.

In a press release issued today Wood said, “I am hoping that AB 21 will be on the Governor’s desk before the end of the month and local lawmakers will give this complicated issue the time it deserves.” But in our phone conversation he acknowledged that it’s hard to say how fast the measure will work its way through the legislature. “Can I get this done by March 1? I don’t know. … It’s just unfortunate that this snafu has created such a concern for cities and counties.

While Humboldt County has responded by rushing to pass an ordinance, many other jurisdictions across the state have instead rushed to install bans on cultivation and distribution.

Asked what he thinks cities and counties should be doing, Wood said he supports Humboldt’s approach.

“I would hope that [local jurisdictions] would take a deep breath and create some sort of a placeholder ordinance or something,” he said. “But I really hate to see what we’re seeing, a rush to ban.” A placeholder ordinance might mean more work than a simple ban, Wood said, “but in the interest of people who rely on medical marijuana, I would hope they would look for alternatives.”

County supervisors have elected to do just that by forging ahead with an ordinance that likely will serve as a mere stopgap measure until there’s more certainty on the legislative playing field. In order to get even that modest measure achieved before March, the board must finish its deliberations by the end of its session next Tuesday. Supervisors agreed to hold a special meeting Monday in an effort to get the job done.

The Planning Commission made a number of changes to the original draft of the ordinance prepared by staff. Those changes, which are summarized on pages four and five of the staff report, were significant enough to require a full environmental impact report (EIR), according to staff, and there’s simply no time for that.

“Particularly problematic,” staff noted, “are the high thresholds for ministerial permits … .” In other words, the Planning Commission draft would principally permit grow operations big enough to have a significant impact on the environment. “Also of concern,” the report continued, “is potential cumulative impact due the allowance of expanded or new cultivation sites in zones largely characterized by timberland (TC, TPZ, FR and U), where watershed and habitat impacts of existing grows are increasingly suspected to be significant.”

This proposal — to allow grows on land zoned for timber production — has been perhaps the most controversial change made by the Planning Commission. Staff argues that not only would such a change be difficult if not impossible to pass under an MND, but it would also likely be inconsistent with the county’s general plan.

Which brings us to yesterday’s meeting. Chambers were packed to the point where many stood along the back wall while others flowed out into the vestibule beyond the doors. In all, three dozen members of the public addressed the board on the issue. 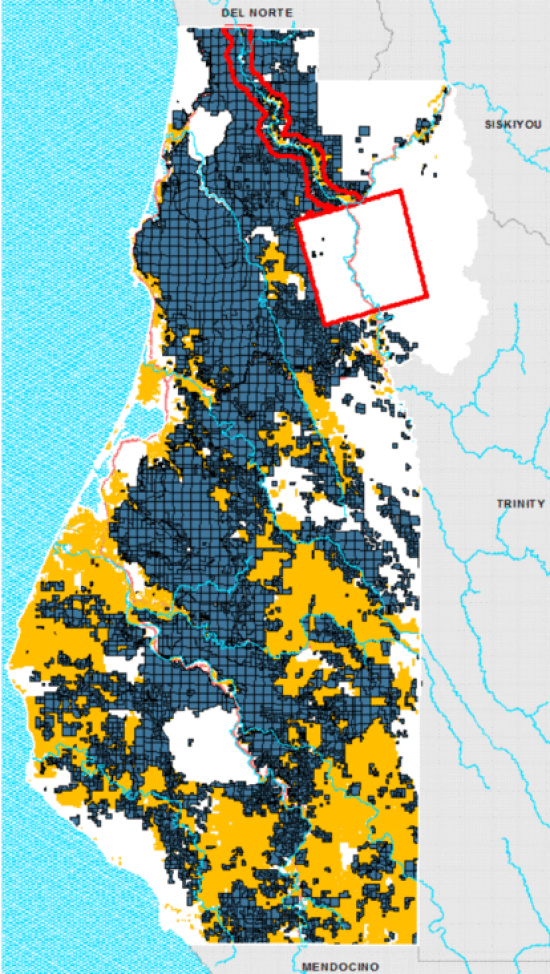 Lazar briefed the board with a Powerpoint presentation. Among the maps he displayed was the one at right, which shows all the areas (in both blue and orange) where cultivation would be allowed under the Planning Commission draft.  Orange represents agricultural zones and blue represents timber production zones (TPZ).

Lazar said that, for the purposes of CEQA, the existing damage done by the black market should be considered the baseline level. So any regulations that helps improve matters could be considered to have no significant negative impact on the environment.

As with previous meetings, the majority of public speakers advocated small grows over large ones, though there was no agreement how to define those terms.

Pot doc Ken Miller recommended a threshold of 2,000 to 3,000 square feet of canopy size under a conditional use permit.

But on the other end of the spectrum, SoHum pot farmer Carl Witt, who said he was “speaking on behalf of 75 large-scale commercial growers,” said cultivators aren’t likely to comply if they’re told to reduce their operations from three acres to just one.

“If Humboldt County wants to have future in the industry, it’s going to have to be on a large scale,” Witt said. “We may think we’re the best growers; we’re not. People in the Central Valley are trying to hire us to be their slaves. I don’t want to be part of that,” he concluded, triggering a wave of applause.

Many speakers thanked the board and staff for forging ahead on an ordinance.

“This really is the pivot point for Humboldt County’s future,” said environmental attorney Paul Hagen, who urged the board to “be bold and be courageous” as it crafted an ordinance.

Concerns brought up included growing in the coastal zone, the proposed ban on pesticides, coordinating with burgeoning cannabis labor unions and regulations for manufacturing and distribution.

Many of these concerns will have to be addressed later, after this placeholder ordinance takes effect.

“I hope people understand that this is just the first step, just to get us going,” Fifth District Supervisor Ryan Sundberg said. “We will do an overall EIR later.”