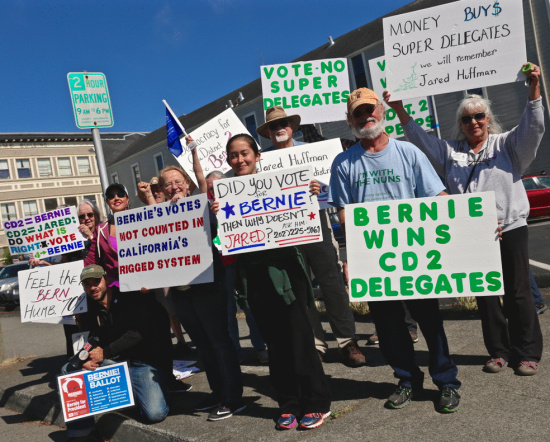 After more than a year of campaigning, Bernie Sanders signaled the end of his active run for the White House Tuesday, finally giving Hillary Clinton his endorsement while standing side-by-side with her at a Kumbaya campaign rally in Portsmouth, New Hampshire.

“She will be the Democratic nominee for president and I intend to do everything I can to make certain she will be the next President of the United States,” Sanders said at the event. Coopting her own campaign slogan, Clinton trumpeted that she and the Vermont senator “are stronger together” and urged Sanders supporters to help her defeat Donald Trump in November.

Not all Sanders supporters are havin’ it.

Humboldt Sanders supporters gathered Wednesday in Old Town Eureka to signal that they still have some Bern in them. The site chosen for the rally was the sidewalk in front of the Eureka District Office of Congressman Jared Huffman, a superdelegate who has voiced support for Clinton and who will, in all likelihood, cast a vote for Clinton at the Democratic Party Convention later this month. That’s no good, says the Sanders crowd. Local Berners believe that since the voters of Huffman’s district voted for Sanders over Clinton in last month’s primaries — by a 53 to 46 percent margin, districtwide — Huffman should honor the preference of his constituents and cast his superdelegate vote for Bernie.

Among the 20 or so still-Bernin’ protesters chanting and waving signs yesterday afternoon was Robert Shearer of McKinleyville who was recently chosen as a California at-large delegate and will travel to Philadelphia later this month for the convention. (Guess who he’s voting for.) Shearer and others LoCO spoke to were quick to point out that Sanders’ endorsement of Clinton did not mean he’d dropped out of the race: There will still be a full delegate roll call on the floor of the convention, and they will continue to support their candidate due to disillusionment with Clinton and despite the party’s nominating process.

“There’s just not party unity,” Shearer said. “There’s a deep divide within the Democratic Party that this campaign has highlighted, and at this point a lot of people feel that the door is being shut on them by the establishment.” 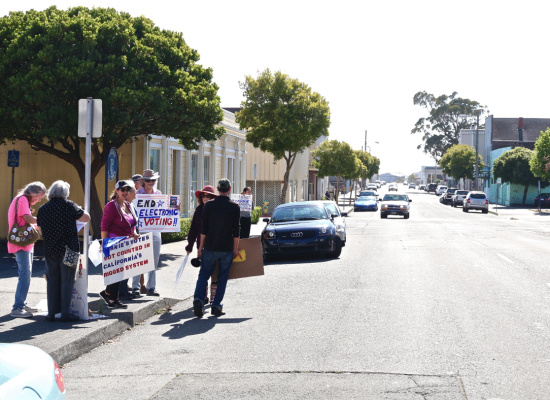 Clinton holds a slight pre-conventions lead over Trump in national polls. There has been much pundit hand-wringing over whether or not dejected Sanders supporters will fall in behind the Democratic Party’s presumptive nominee once November rolls around. Shearer, for one, is not ready to offer his support to Clinton at this point.

“I really can’t speak to that at this time,” he said. “I don’t feel that she’s made the concessions that I want to hear.”

Shearer made sure to note that he was not endorsing anyone outside of the Democratic Party — doing so would violate party rules and could jeopardize his delegate credentials. Other picketers were not encumbered by such restrictions.

“Jill Stein’s going to get a lot of votes,” said John R. Moran, a retired machinist union representative. When LoCO asked the group at-large whether they would vote for Clinton in November, nearly all indicated that they would not. They were asked if a Trump presidency concerned them.

“She’s just as bad!” protester Earla Pankiewicz shouted back. “The Democratic Party is going to see a lot of people leaving. People are really upset, especially after this thing yesterday, because nobody believes that [Sanders] really endorses [Clinton].”

As you might imagine, local Sanders supporters said that the way Huffman handles his superdelegate duties will influence the way they vote for Congress in future elections.

“You’ve got hundreds of people who’ve trained for over a year and are very skilled at organizing and activating the people of out community.” Shearer said. “The superdelegates, not just here but across the country, really need to beware because if you’re not stepping up to the plate and putting forward the real progressive values that we want then we’re going to get you out of office.”

In case you were wondering, no, Congressman Huffman was not in his Eureka office Wednesday to be influenced by signs. In fact, no one was. 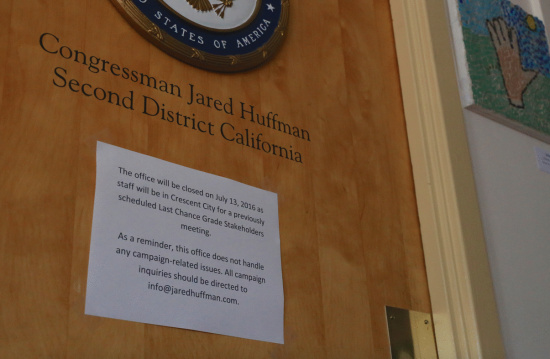 Sanders supporters’ distaste for the Democratic Party’s system of delegates and superdelegates used for selecting its Presidential nominee has been well documented, but, just in case you haven’t wrapped your head around their arguments against, below is an op-ed written by Shearer in which he explains why he feels superdelegates are just bad:

Jared Huffman represents California’s North Coast in Congress. Or does he? The Congressman has pledged to cast his superdelegate vote at the Democratic National Convention in late July for Hillary Clinton despite the fact California’s second district voted 53.1% for Senator Sanders and only 46.3% for Mrs. Clinton.

In Humboldt County, Sanders received 70.1% of the votes, marking the largest spread in the state. Still, Congressman Huffman has stood his ground in defense of his October 2015 endorsement of Mrs. Clinton on social media and in response to letters and emails from constituents who are feeling unrepresented, and rightfully so.

Earlier this year, a CNN reporter asked Democratic National Committee chairperson Debbie Wasserman Schultz, “What do you tell voters who are new to the process who say this makes them feel like it’s all rigged?” Schultz replied, “Unpledged delegates exist, really, to make sure that party leaders and elected officials don’t have to be in a position where they are running against grass-roots activists.”

How can superdelegates be democratic when they take away the power of the average person’s vote and are admittedly in place to deter the people-powered, bottom-up change embodied in grassroots campaigns like Senator Sanders? This justifiably frustrates and angers voters.

Democrats throughout California’s North Coast and across the rest of the country are questioning if the Party still represents their needs and interests. July’s Democratic National Convention is being hosted by major donors to the Republican Party and anti-Obamacare lobbyists largely from the healthcare insurance industry. Is this perhaps why the DNC Platform Committee, currently debating revisions, and largely appointed by the same people, is so staunchly against the inclusion of Medicare-For-All language in the 2016 Platform? Polls have consistently shown for decades that the majority of Americans, and the vast majority of Democrats, support universal single-payer healthcare.

Given the undemocratic influence of superdelegates and the Party’s blatant disconnect from the typical person, many of the millions of previously-disenchanted voters Senator Sanders brought into the political process over the past year are left feeling unrepresented. Can we afford to let these potential general election voters resign to continued despair with big Party politics when their elected officials cast superdelegate votes against the will of their votes?

The 2016 Democratic primary election cycle has brought into the spotlight the depth of influence of corporate interests over the Party and many of it’s leaders. Senator Sander’s campaign has become the people’s political revolution. As a campaign grew into a movement, the intersectionality of countless social, environmental, economic, and international issues was revealed. Also exposed, was how all of these issues are rooted in and sustained by the maintenance of status quo politics that favor corporations and the super rich at the expense of the climate and everyday and underprivileged people.

Superdelegates, being a clear tool for the maintenance of the status quo via the business-as-usual corporate politics model that has left most Americans feeling their votes are worthless, have come under scrutiny from not just the grassroots activists of the Sanders campaign, but also many state Democratic parties.

The California Democratic Party recently joined 16 other Democratic state parties in the passing of resolutions that either eliminate superdelegates or substantially reduce their ‘super powers’ by making them vote in accordance with the popular vote of their constituents and banning corporate lobbyists from being appointed superdelegates by Party leadership. California’s resolution, entitled “Resolution To Advance A More Democratic Presidential Nominating Procedure and Party Structure,” was co-authored by Christine Pelosi, daughter of Nancy Pelosi, both of whom are superdelegates.

Why would the Democratic Party continue a practice that so many people agree is undemocratic?

Why is Congressman Huffman refusing to represent the will of the people of his district?

What effect will this have on the Party’s need to retain registered Party members and get out the vote in November?