(VIDEO) Who Let That Damn GEICO Gecko Near Our Majestic Redwoods? »

Weird Surveillance Truck in Your Neighborhood? Once Again, That is Just PG&E 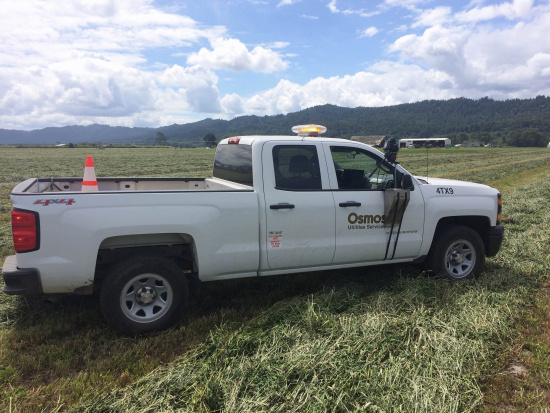 This Osmose truck, which has been equipped with thermal imaging gear, is patrolling certain Humboldt County neighborhoods.

Will PG&E ever run out of ways to terrify the local population with strange, high-tech gear that just seems somehow suspicious? Yesterday we told you about the black helicopter inspecting lines around the bay. But it turns out that the utility has a ground game, too.

While the chopper examines lines from the sky, a weirdly kitted-out truck is doing similar work on the ground. The truck, the kit and personnel have been leased from Osmose Utilities, an independent contractor with a name that the Marvel Cinematic Universe might want to consider when casting its next band of evil-doers.

But Osmose comes in peace. Bill Russell, a lineman assigned to this project, called up the LoCO yesterday to say that the truck, currently working the Rio Dell area, has been the object of long stares in the Warm-Hearted City, and that he hoped the Outpost could help spread the word that Osmose comes in peace. They’re using their thermal imaging gear to identify failing PG&E lines and equipment, and for no other purpose.

This morning Russell emailed us a bit more information and a picture of the Osmose truck. He writes:

I’m a lineman, and I’m working with a company called Osmose using their equipment to perform thermal imaging on five specific circuits in northern California. We’ll be performing the inspections for the next three weeks in the following areas: Rio Dell, Fortuna, Loleta, Janes Creek, Carlotta, Arcata and Maple Creek.

We’ll be following the distribution lines in those areas, meaning that somehow we need to visually check the entire line. If we can’t get through gates to drive the line we’ll have to walk it out. A point I’d like to make especially for your audience is that the scope of this project is to inspect the high voltage lines, locating equipment and connections that are failing. We are not looking for heavily loaded transformers or anything else.