Burglar Shot in the Leg by Person He Tried to Burglarize, Rio Dell Police Say » 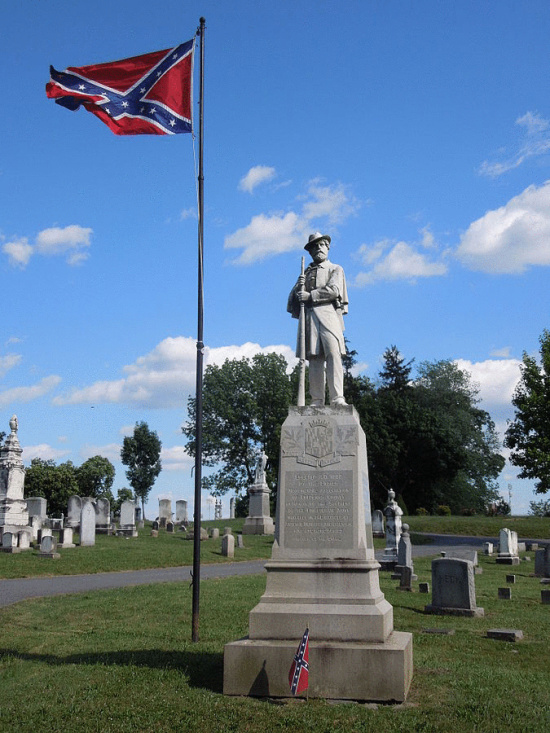 The Confederate battle flag flies at Mount Olivet Cemetery in Maryland. The original uploader was Pollockdog at English Wikipedia - Transferred from en.wikipedia to Commons.

Congressman Jared Huffman, our representative here on the North Coast, today excoriated Congressional Republicans for interrupting the ongoing gun-control sit-in early this morning to cast a vote that allows the Confederate battle flag to keep flying over national cemeteries.

Huffman and other Congressional Democrats had added the flag ban to a Department of Veterans Affairs funding bill back in May, when it was approved by a vote of 265-159 according to Politico. But at 3:10 this morning, the Republican House majority reversed that decision by approving the spending measure with the flag ban omitted.

In a passionate press release, Huffman called the move “shameful” and described the flag as a symbol of racism and hate.

Washington, D.C.- In the dead of night while civil rights icon Rep. John Lewis (D-GA) led Congressional Democrats in righteous protest to call for a vote on gun safety, Congressional Republicans added insult to injury by quickly reversing an earlier vote on a provision by Rep. Jared Huffman (D-CA), Rep. Ruben Gallego (D-AZ), and Rep. Keith Ellison (D-MN) to remove Confederate flag displays from national veterans cemeteries. At 3:10 am, without allowing any debate, the Republican House majority approved a partisan conference report that had been filed only hours before, which omitted the Huffman-Gallego-Ellison amendment despite its earlier House approval.

“Amidst a historic protest to demand action on the nation’s gun violence epidemic, in the wake of the largest mass shooting in our nation’s history, we are seeing the real priorities of the Republican majority; they have refused to allow any votes on gun safety, but did find the time to try bring back the racist symbol of the Confederacy. It is shameful that Republicans would once again seek to allow Confederate battle flags, a historic symbol of hate, to be flown over VA cemeteries. Republicans are showing where their allegiance lies — and it is not with the victims of gun violence,” said Rep. Huffman.

‘I demand that Speaker Ryan allow a vote on common-sense gun safety measures, such as implementing universal background checks, closing firearm sale loopholes, keeping firearms out of the hands of terrorists, supporting law enforcement and first responders, and fixing our mental health system. We will not break for a congressional ‘recess’ until we are allowed to vote on the commonsense, bipartisan bill to reduce gun violence. No bill, no break!”

Just last month, the House of Representatives passed the Huffman-Gallego-Ellison amendment to the 2017 VA funding bill, to prohibit federal taxpayer funds from being used to fly the Confederate battle flag at cemeteries operated by the Department of Veterans Affairs. The VA currently permits the display of the Confederate flag on Memorial Day as well as on Confederate Memorial Day at 131 facilities.