Last week a meeting was held with local ranchers regarding the destruction of livestock by dogs. During that meeting strategies were discussed on ways to curb these indiscriminate attacks, which includes prosecution and restitution for the double the value of the animal. Sheriff Mike Downey will not back down from his promise to seek prosecution for dog attacks.

Sheriff Downey stated, “ I believes these dog attacks are the result of the unregulated industry of illegal marijuana cultivation by growers who maintain these dogs to protect their grow sites.” In many cases these animals can be extremely dangerous and vicious. These dog owners feel the need to keep extremely dangerous dogs on their property to protect their harvests but to what cost for neighboring landowners? These dogs are not being contained on their property and are free to roam wherever they want, causing havoc and terrorizing livestock. There are no leash laws in the unincorporated areas of Humboldt County, but the dog owner must be in control of their dogs at all times. If a dog is found on another person’s property and is harassing or chasing their livestock, the property owner has the right to kill the animal.

Owners of dogs that injure or kill livestock are both criminally and civilly liable for their actions. Per Cal. Food & Agric. Code §31501.

“The owner of any livestock or poultry which is injured or killed by any dog may recover as liquidated damages from the owner of the dog twice the actual value of the animals killed or twice the value of the damages sustained by reason of the injuries, as the case may be.”

Ranchers are frequently dealing with mauled livestock, which is a drain on cattlemen and their resources. The livestock that are not killed by the roaming dogs are traumatized and difficult to handle. This needs to stop. The Sheriff’s Office has taken a very aggressive stance on this issue and will not stop investigating these senseless attacks until justice is achieved.

The attached image is from the most recent dog attack on cattle. This cow was put down as a result. 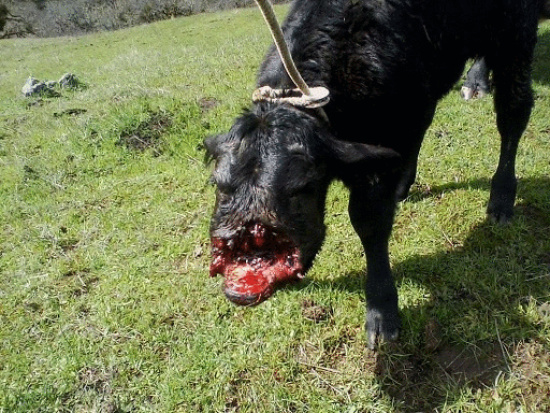