« City of Eureka Pledges to Rehouse Palco Marsh 11, Store Their Stuff for 90 Days

I had the good fortune to be born in the UK, where circumcision was and is rare. Here in the US, I haven’t had much luck talking and writing about the practice, which I consider to be a violation on the bodies of non-consenting infant boys.

The first paper for which I wrote regular opinion pieces, the Bellingham Herald, happily accepted everything I submitted, from gun control to Native Indian rights to nuclear war — until, that is, I sent them my anti-circumcision rant. “We don’t want to alienate our readers and advertisers with this unscientific screed,” my editor told me. Next up was our local Toastmasters Club, where I waxed eloquent on “The Unkindest Cut” (paraphrasing Shakespeare). Louisa reported to me later that a fellow Toastmaster, a guy she knew well, was incensed. “How does he know?” he spluttered.

Fair enough. I could have shown him letters printed verbatim in a book I had on circumcision, from guys who had known what it was like from both sides, intact and non- (having been circumcised later in life, mostly because of medical necessity such as phimosis). I’m sure the editors of the book were biased, but all the now un-intact men mourned the loss of their foreskins, citing a major loss of pleasurable sensations. (“Good thing too,” remarked a female friend rather unkindly. “Guys come too fast as it is.” Humph.)

The “loss of pleasure” reports fit with what we know about sensitive nerve endings. To demonstrate: stroke the back of your hand lightly with the fingers of your other hand. Now stroke your palm. Notice the difference? The back of your hands is covered with “Pacian corpuscles,” nerve endings that feel deep pressure and pain. Meissner’s corpuscles, the nerve endings on your palms, are much more sensitive. They’re also found on fingertips, around the mouth and anus, nipples, clitoris and soles of the feet. But they’re mostly concentrated in humans—to the tune of some 20,000 nerves endings—in the ridged band around the opening of the foreskin. (The clitoris has about 4,000.) When a week-old boy is circumcised, he’s losing the most sensitive part of his body.

To be fair, this claim about sensitivity is challenged by a Canadian study cited in last Sunday’s New York Times “Wellness” section, which prompted this column. I await rebuttals. For what it’s worth, my own foreskin is hugely sensitive compared with the tip of my penis. 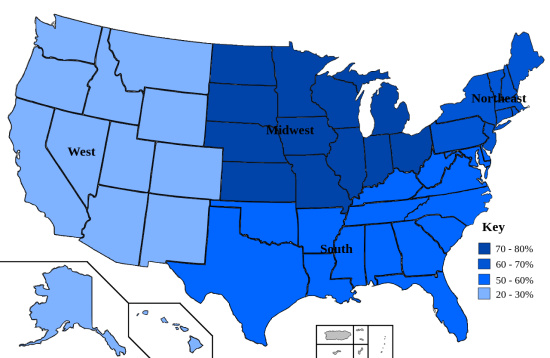 The curious regional disparity in neonatal circumcision in the US for 2009. (Drs. Maeda-Chari-Elixhauser from Agency for Healthcare Research. Public domain.)

I lost a couple of Jewish neighbors as friends over this issue when they had a baby boy. OK, I shouldn’t have ranted, I know, but when they accused me of being anti-Semitic, I took exception. Apparently it’s fine to criticize circumcision on medical grounds, but not on religious grounds: Jew or goy, I don’t discriminate. We later lived in a group house with a Jewish couple who celebrated their eight-day-old boy’s heritage with a non-surgical bris (brit shalom), a ritual whose popularity is growing.

Jewish and Muslim boys worldwide are virtually certain to be circumcised, while a boy born in the US has about a 1 in 2 chance of remaining intact (in Canada, it’s 2 in 3). Sadly, circumcision is now being promoted in many African nations as a prophylactic against HIV. Which, to my way of thinking, makes no sense at all, for two reasons: (1) a circumcised guy is less likely to practice safe sex; (2) it can wait; an intact teenager can decide for himself whether or not to have the operation (with anesthetic this time).

While we’re talking medical recommendations, in response to the “circumcision helps prevent cancer of the penis” canard, males have about a 1 in 100,000 chance of dying from this rare disease, the same odds an infant boy has of dying from circumcision.

Somehow, whenever I do bring up this topic, the issue of female genital mutilation (FGM) often comes up, in the context of “circumcision isn’t anything like as bad as FGM.” I think this is a red herring. FGM is horrendous and cruel, by any reasonable standards. But as a commentator summarized on a discussion forum, “Do we really need comparison studies to decide if it’s wrong to cut our children up?” I would add that while researching this column, I saw several instances of the US accused of hypocrisy in condemning FGM (in Africa for example) while we accept male genital mutilation in this country.

Turns out, the US is something of an outlier. While some 1.4 million circumcisions are performed annually in this country, in Europe it’s rare. Three years ago, the Parliamentary Assembly of the Council of Europe passed a resolution calling circumcision “a violation of the physical integrity of children.” 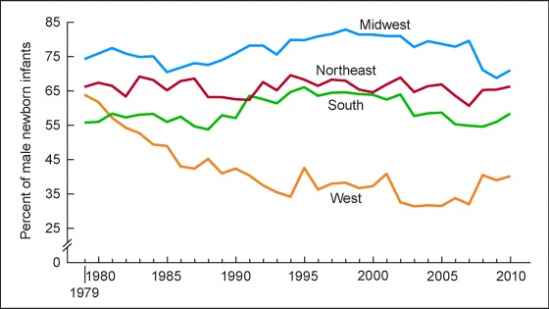 30-year trend in circumcision rates in the US (U.S. Centers for Disease Control and Prevention)