A Soggy Celebration for HSU Grads »

On a not-all-that-unusual sunny SoHum day, your Lost Coast Outpost had the chance to take a little walk-a-long through Garberville with Sergeant Jesse Taylor, of the Humboldt County Sheriff’s Office, and John Anderson, a clinician with the Department of Health and Human Services’ Mental Health Department , as they interacted with the local homeless population. With the dismantling of Palco Marsh, Humboldt’s highest profile homeless encampment, still fresh in our collective minds, no local topic seems to provoke community frustration as much as homelessness, but solutions often seem in short supply. Today’s goal? Building rapport with the homeless population and connecting those in need with services that might benefit them.

We come across a pair of middle-aged gentlemen sitting on the raised edge of the Ray’s Food Place parking lot. One of the men is familiar to Sergeant Taylor. As we approach the smell of urine hangs in the air. Sergeant Taylor greets the man and they catch up by conversing somewhat jovially about another local homeless man who recently landed in jail.

“I hate to say it, but it’s a good place for him,” the man says with a laugh. The unfamiliar man, perhaps wondering if he’s in some sort of trouble, speaks up.

“I just walked up here, sir, and sat down,” he says, nervously.

“Yes, sir,” the man replies adding he’s from Florida. He says he plans to stick around Humboldt for awhile but promises he “ain’t gonna bother anyone.”

“How’d you get here? I’m always interested in how people got here,” Anderson asks.

“Uh, it’s a long trip, sir,” the man says. Anderson asks the newcomer if he’s getting enough to eat and then informs him about the regular free meal available Tuesdays through Thursdays starting at noon at the Mateel Community Center. There’s also a food pantry across the street from Chautauqua Natural Foods.

“There’s way more services up in Eureka,” Anderson tells the newcomer noting that there are places to get food stamps and more housing options. The newcomer says he collects Social Security Disability benefits as the result of a surfing accident and rolls up his pants leg to reveal a long scar on his knee.

“Your career as a knee model is out the window,” Anderson tells the man and they share a laugh. Soon after we’re off walking again. 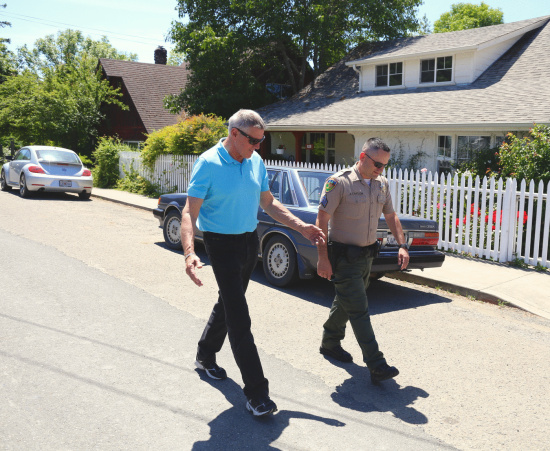 John Anderson moved to Leggett about a year ago after spending his career in Eureka. in An HSU graduate, Anderson had been working for local lumber mills until the mid-1970s when a friend recommended that he seek a job at the county’s Sempervirens Psychiatric Health Facility. Three decades later he retired as Deputy Mental Health Director. He managed to stay mostly retired for six years, but when a part time position opened up close to his new home he couldn’t pass it up. 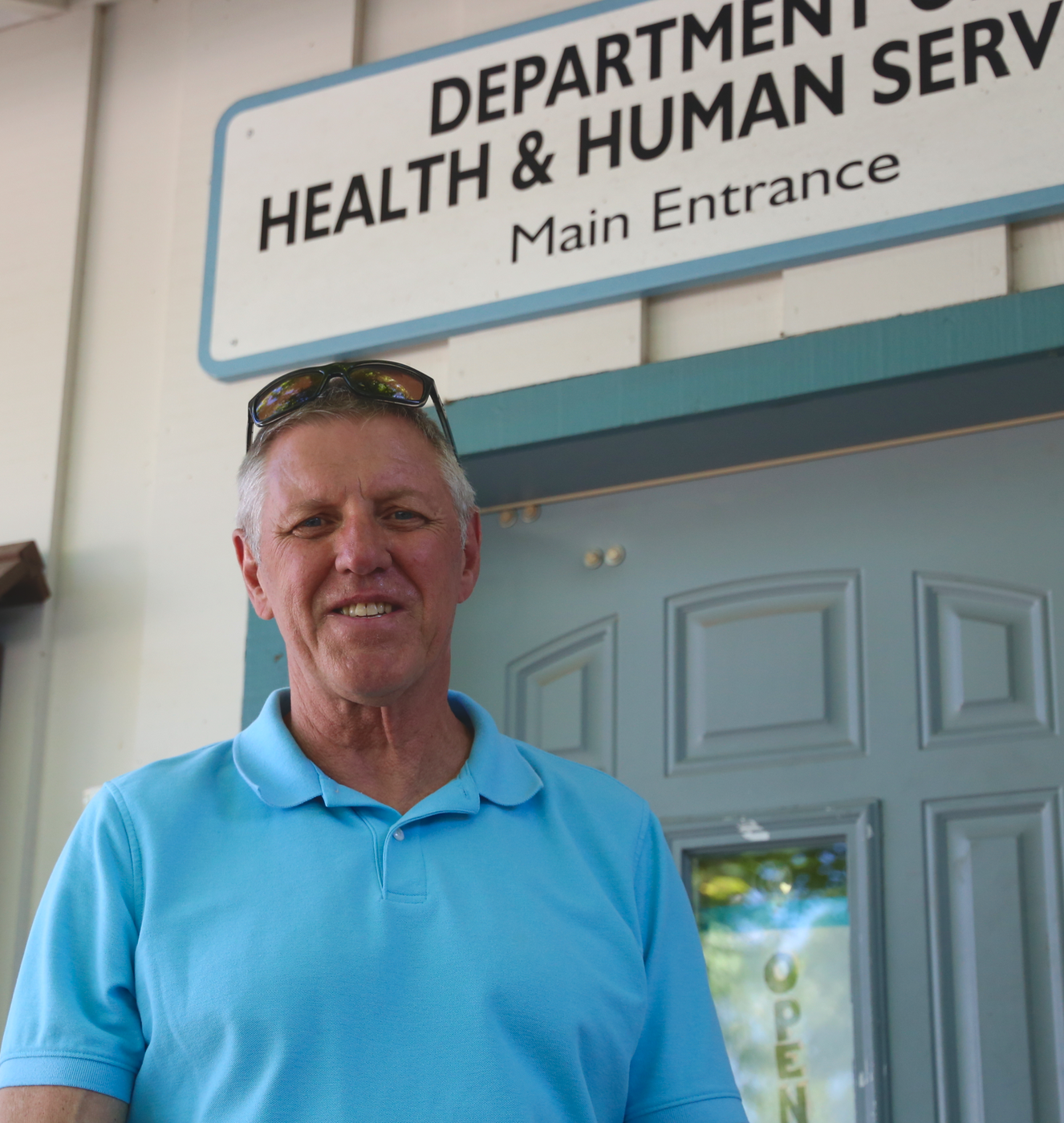 “You work for the mental health department for thirty years you get the opportunity to develop a unique set of skills,” Anderson says adding he missed the work.

After the county and the Eureka Police Department joint MIST program found success with its attempts to build relationships with local homeless individuals, Anderson told us both his department and the Sheriff’s Office expressed interest in employing a similar model to better connect with populations countywide. They teamed up for the first time in SoHum last week.

“Some of our clientele can be unpredictable,” Anderson says noting that having an officer by his side can help stabilize interactions.

The multiagency 2015 Point in Time count tallied 1,319 homeless people living in Humboldt County with 13 percent of that total — a little less than 200 people — dwelling in  Southern Humboldt. Neither Sergeant Taylor or Anderson wanted to speculate on the number of people currently residing in the area but Taylor casually estimates that the population triples in the fall when travelers swarm into town looking for marijuana industry work. Anderson thinks that Humboldt’s drug culture and substance abuse is at the root of local homelessness.

“Violence comes with it,” Sergeant Taylor says. “These people, especially the ones who are addicts, will do just about anything to get their fix. That includes violence against each other, theft, property crimes…”

Sergeant Taylor seems to have intimate knowledge of nearly every person we encounter and notes chapters of their stories as we walk. One person used to have a successful marijuana growing operation before falling on hard times. Another had recently been a missing person. 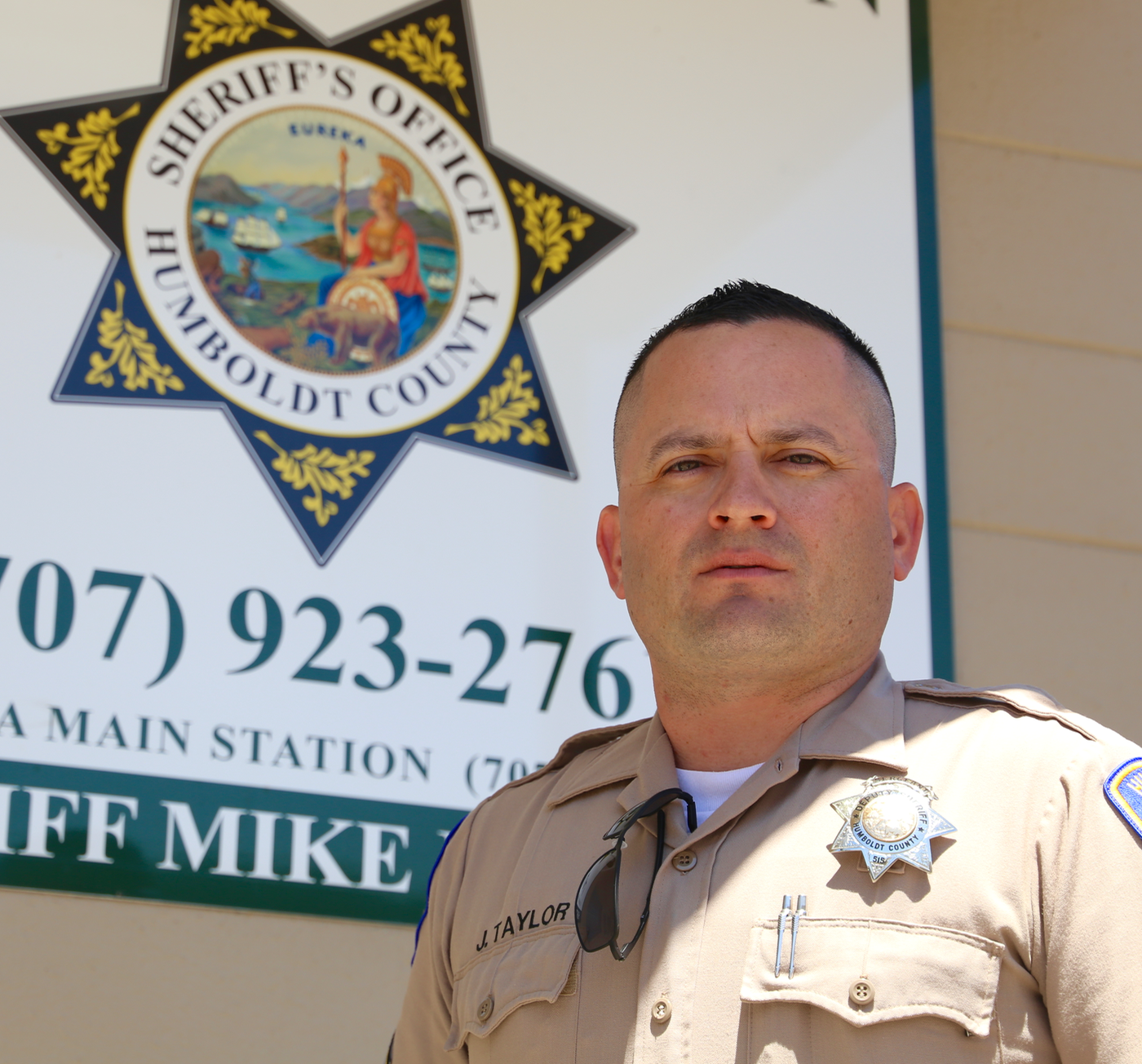 “You get to learn everyone’s story pretty quick down here,” Taylor says. He’s been a supervisor in SoHum for about a year and half and has worked in the area for about six years (he previously worked out of Eureka). The vast section of Humboldt he and his deputies are tasked with overseeing runs north to Redcrest, south to the Mendocino County line, west to Shelter Cove and east to Blocksburg. Usually there are there are two other deputies in addition to Taylor on duty. On the day of our walk, though, there is only one other deputy working and they are off transporting an arrestee to the Humboldt County Correctional facility in Eureka for booking.

“For another half hour or so I’m it,” Taylor says. Sometimes deputies from the north will agree to meet halfway for an arrestee handoff, but the bare bones staffing in SoHum means that Taylor sometimes has to be rather selective about what crimes warrant an arrest.

“Down here we walk away from things that I would have never walked away from when I worked in Eureka,” Taylor says. 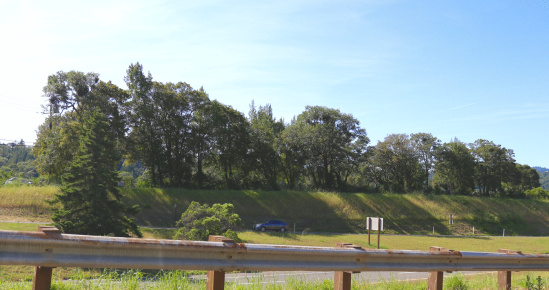 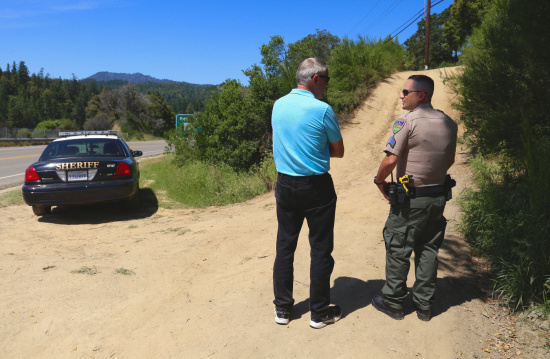 We take a short drive to the north end of Garberville crossing over to the west side of Highway 101 on our way to “Hippie Hill,” likely metro SoHum’s most sizable houseless encampment. There, atop a tree-covered raised embankment adjacent the freeway, somewhere between 20 and 30 people have established camps boasting features suggesting permanence similar to the ones, until recently, found in the Palco Marsh; propane tanks, wooden pallets, tarps affixed to trees, etc.

And yes, there is lots of trash.

“It’s out of control,” Taylor says which is, in part, why Hippie Hill’s days are numbered. Taylor tells us that, in roughly two weeks time, county workers will execute a sweep in some ways similar to the one carried out in Eureka.

Part of the reason that Hippie Hill has been able to flourish for so long as a homeless destination is that the owner of the land did not live in the area. Its proximity to town and the fact that it’s mostly hidden from the road made it an ideal encampment location. Additionally the land, Taylor suspects, is not developable due to its proximity to the freeway and easement issues with PG&E.

But now ownership of Hippie Hill has changed hands. According to Taylor, a local business owner, fed up with problems associated with the camp, bought the land and has given the Sheriff’s Office the go ahead to clean up the area. During our visit Taylor reminds campers that they’ll soon need to move along. One woman tells us she is comfortable on the hill and is not eager to move.

“I have the best camp on the hill,” she says adding that she appreciates the safety in numbers benefits of being in the encampment.

She tells us that she came out to Humboldt from Arizona with her boyfriend who had hoped to find work in the marijuana industry. Things happen. He went back home to live closer to his child. She decided to stay and continue he “soul search.” She’s appreciative that people like Anderson are are around to assist.

“I’m pretty self-sufficient but I need help sometimes,” she says noting that feminine products are hard to come by. Her mom has been sending her money and she’s been experimenting with making jewelry. We ask her where she will go if she can no longer stay on Hippie Hill. She takes a second, then gives her answer. 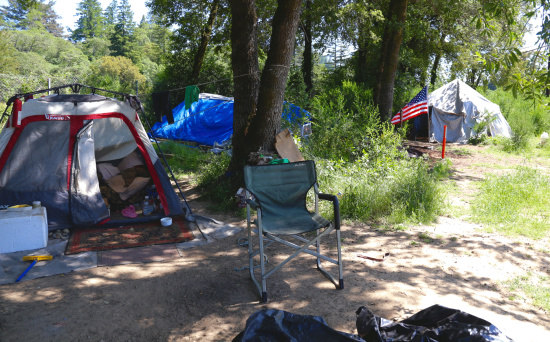 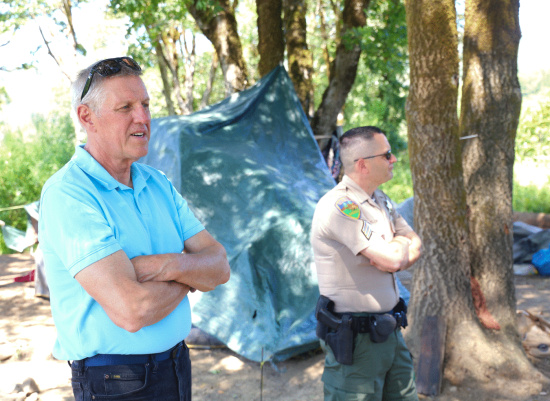 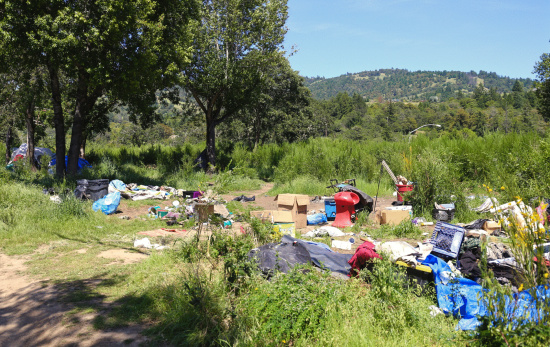