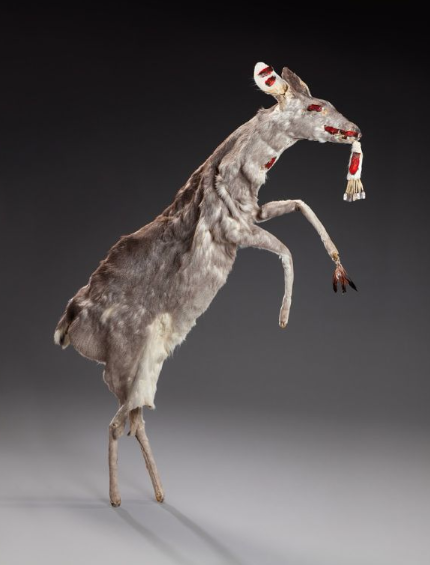 Next Monday a Paris auction house is scheduled to sell off hundreds of Native American artifacts, among them an item originating with the Hoopa tribe used in tribal ceremonies. In response, numerous tribal leaders and federal officials gathered for an “emergency meeting” at the Smithsonian’s National Museum of the American Indian earlier this week to discuss the auction and to urge the French government to intervene in the sale.

In addition to the Hoopa item, the auction will feature an Acoma Pueblo battle shield and a shirt — suspected to be Lakota in origin — that contains human hair. Sale of such items in the United States is illegal, but not in France.

Above: Video of Tuesday’s meeting in Washington

Tuesday’s meeting was attended by Hoopa Valley Tribal Council members Bradley Marshall and Leilani Pole who described the loss of artifacts “by the wagonloads” over the years to outsiders looking to profit of them. Marshall chronicled atrocities inflicted on his people beginning around the time of California’s gold rush 150 or so years ago.

“Through that time period, our sacred objects began to leave our community,” Marshall said. “That was due to the desire from the non-Native people to strip us of our culture, strip us of our religion, strip us from who we are as a people.”

The tribes have the backing of US officials. Meeting organizer and Republican New Mexico representative Steve Pearce is asking congress to support efforts to stop the export of Native American cultural items for sale. He recently introduced a resolution in the House of Representatives aiming to discourage actions like Monday’s auction. The resolution has yet to receive a hearing before any of the committees it has been referred to.

For more on Tuesday’s meeting, here’s a piece posted yesterday on NPR’s blog.