This morning, the Yurok Tribe filed a federal lawsuit seeking to prohibit members of the Resighini Rancheria — a roughly 36-person tribal entity surrounded entirely by Yurok territory — from gillnet fishing on the banks of the lower Klamath.

Nevertheless, the tribe says, rancheria members — and in particular Gary Dowd, the rancheria’s secretary — have refused to stop fishing on tribal land. The complaint lists separate occasions, spanning from 1994 to 2014, when Dowd was cited by state, federal or tribal police for fishing on Yurok land without either the permission of the tribe or a California fishing license.

The suit asks for a federal court to finally stop Dowd and other Resighini members from fishing on Yurok territory without the tribes permission. It comes amid dire forecasts for the upcoming salmon season. Earlier this week, the Yurok Tribe voluntarily imposed severe restrictions on its own members’ take of spring-season Chinook, and urged other, non-tribal members to likewise limit their fishing on the river this spring.

The Resighini Rancheria’s website includes a statement on the fishing rights dispute, apparently written before the suit was filed, which holds that members maintain their aboriginal fishing rights. “We will continue to work with the Yurok Tribe to correct this injustice and to restore our right to fish the waters that our ancestors have fished since time immemorial,” the tribe states. 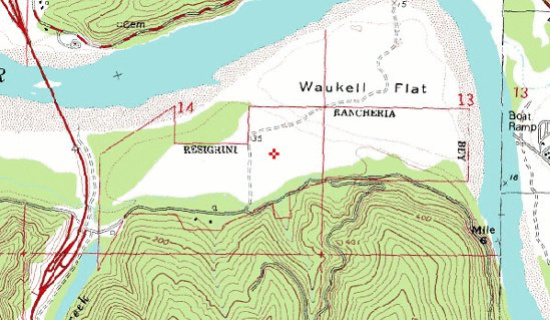 USGS map of the Resighini Rancheria, on the east side of Highway 101 just before it passes over the Klamath.

Press release from the Yurok Tribe:

Today, the Yurok Tribe filed a case in the US District Court for the Northern District of California that seeks to halt illegal gillnet fishing in the Lower Klamath River.

The Yurok Tribe is seeking a declaratory judgement against the Resighini Rancheria as well as Rancheria Secretary Gary Dowd for their unauthorized harvest of Klamath River fish within the Yurok Reservation. Tribal and state law enforcement have cited Dowd, and other members of the Resighini Rancheria, numerous times for fishing on the Lower Klamath River without a Yurok Tribal or California State license.

“This action is a last resort,” said Thomas P. O’Rourke Sr., Chairman of the Yurok Tribe. “We have an obligation and a responsibility to stand up for the fish because they do not have a voice.”

Yurok Tribe is the largest tribe in California with over 6,100 members. The Yurok Reservation straddles the Lower Klamath River, extending for one mile on each side of the River from the mouth at the Pacific Ocean approximately 45 miles upriver to the confluence of the Trinity River.

The Resighini Rancheria consists of approximately 228 acres of land located entirely within the Yurok Reservation. Although some Rancheria members are of Yurok descent, they are not members of Yurok Tribe.

The Yurok Tribe alone maintains federally protected Tribal fishing rights in the Lower Klamath River. In 1988, Congress enacted the Hoopa-Yurok Settlement Act (HYSA), which partitioned the then existing Reservation into two separate Reservations for the Hoopa Valley Tribe and the Yurok Tribe.

The HYSA gave the Resighini Rancheria membership an opportunity to become members of the Yurok Tribe, and thereby participate in the Yurok Tribe’s reserved fishing right. Instead, the Rancheria’s membership elected not to take part in this right, and other rights enjoyed by Yurok Tribal members, in exchange for a buy-out of $15,000 per-person.

Resighini members were aware of the consequences of their decision to elect the buy-out. Individual members agreed to the terms of the buyout only after being informed in writing and in-person that they would “not thereafter have any interest or right whatsoever in the tribal, communal, or unallotted land, property resources, or rights within, or appertaining to … the Yurok Reservation or the Yurok Tribe.” 25 U.S.C. § 1300i-6(d). Only the Yurok Tribe holds federally reserved fishing rights within the Reservation created by the 1988 Act.

A declaratory judgement in the Yurok Tribe’s favor will also add another layer of protection for the fish species of the Klamath, California’s second largest river. Unregulated fishing of any kind weakens the conservation objectives that are in place for the protection of Klamath River fish. The quantity of fish harvested by Tribal and authorized state fishers in the legal Chinook salmon fishery is set by experts in salmon population dynamics. The allowable harvest for Tribal, commercial, and recreational fishermen is capped to allow a significant and specific number of salmon to escape to the spawning grounds, ensuring sufficient numbers in future years.

Once the allowable harvest quantity is met, the respective managers shut down the tightly monitored fisheries. Any unregulated fishing takes from this escapement, which jeopardizes the species’ ability to replenish future stocks. Resighini Rancheria members who fish without a license from California or the Yurok Tribe are engaged in “unregulated” fishing which directly imperils the future of the fish.

The Yurok Tribe is responsible for developing some of the most sophisticated Fisheries and Watershed Restoration Programs on the West Coast. Every year, the Tribe invests millions of dollars in large-scale, river rehabilitation projects, which benefit fish, mammals and waterfowl. These restorative projects will not reach full potential while unauthorized fishing practices continue to occur.

This year, the predicted salmon run on the Klamath River is so low that the Tribe’s fishery allotment is less than one fish per Tribal member. According to a common consensus among fisheries biologists, the outlook for the coming years is equally dismal. When fish numbers are this depressed, the damage done by poaching is much more drastic and can take decades to fix, because far fewer fish will be producing offspring. The Klamath River must be managed responsibly, and the fishery allowed to rebound.

“The Yurok Tribe will vigorously defend its exclusive fishing right within the Reservation. The Tribe will defend the fish. This case is a necessary step toward protecting our right and preserving the fishery for future generations,” concluded Chairman O’Rourke.