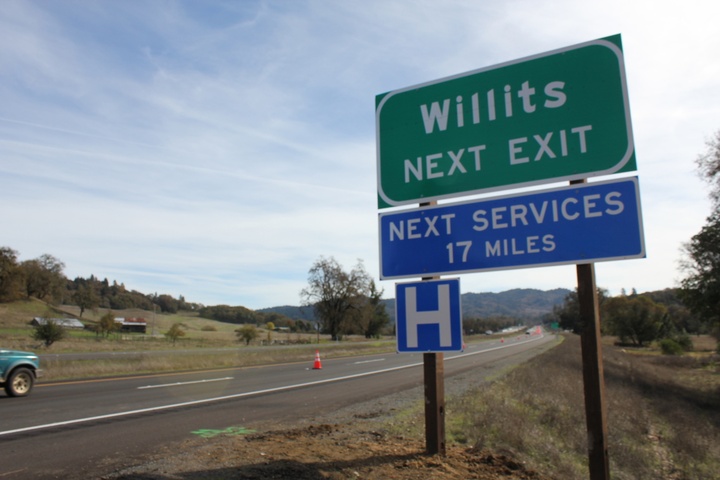 Behold! The southern exit to Willits.

At least a thousand people gathered on a bridge in the middle of the Little Lake Valley this afternoon to commemorate the opening of the Willits Bypass, a construction project first envisioned some 60 years ago, and which will officially open to traffic sometime later today.

Two Congressmen were in attendance — Reps. Jared Huffman and Mike Thompson — as was Assm. Jim Wood, Caltrans director Malcolm Dougherty and a good portion of the California Transportation Commission, Humboldt County Supervisors Estelle Fennell and Rex Bohn, and numerous other dignitaries from around the region and hundreds of members of the general public.

The ceremony took place about halfway along the bypass, at the entrance to the Jesse D. Pittman Memorial Bridge, just to the east of downtown Willits. The new highway winds through groves of gnarled oaks, with views of the backsides of various businesses and fog-shrounded mountains in the distance. People who came early wandered up and down the viaduct, taking in the sights. 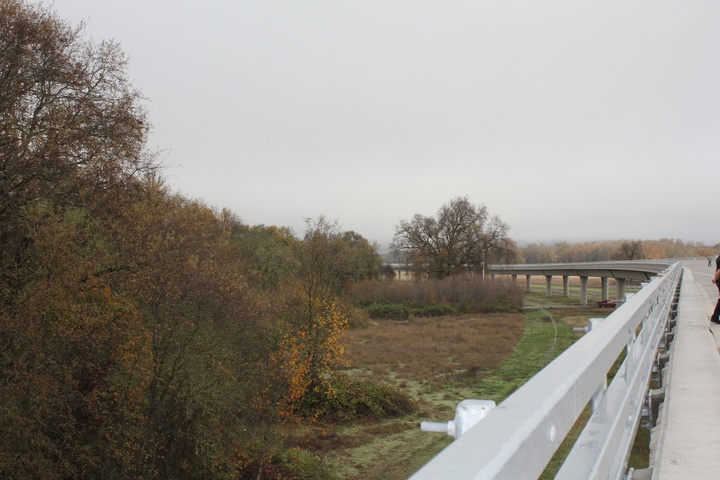 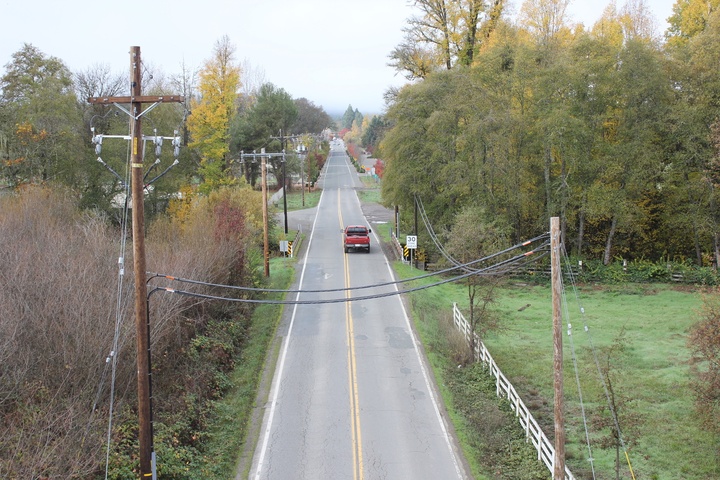 Willits’ Commercial Street from above. 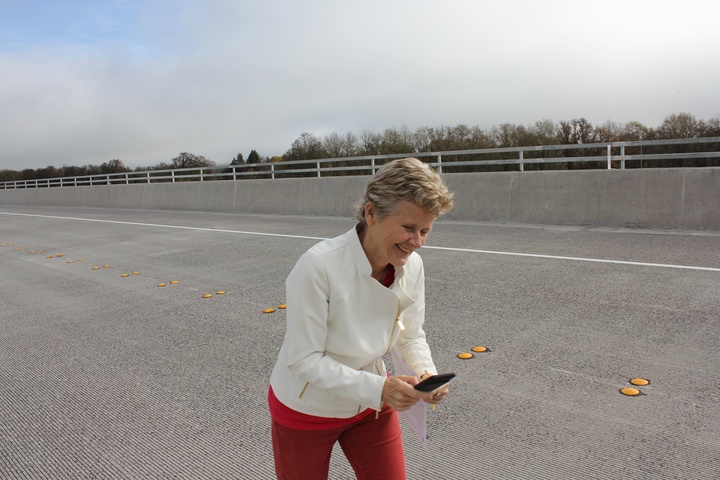 Humboldt County Supervisor Estelle Fennell got some pictures before the ceremony began.

The crowds were larger than expected, and when it was time to begin it took a moment for Betsy Totten, the Eureka-based Caltrans District One public information officer who served as master of ceremonies, to clear a space in front of the podium, so that some special invitees — families of soldiers killed in action — could have a view from the seats set aside for them.

“Everybody please move back,” Totten said into the public address system. When some uniformed military members started to find new places for themselves, she amended her request: “Actually, Navy SEALS — you can stay there.” 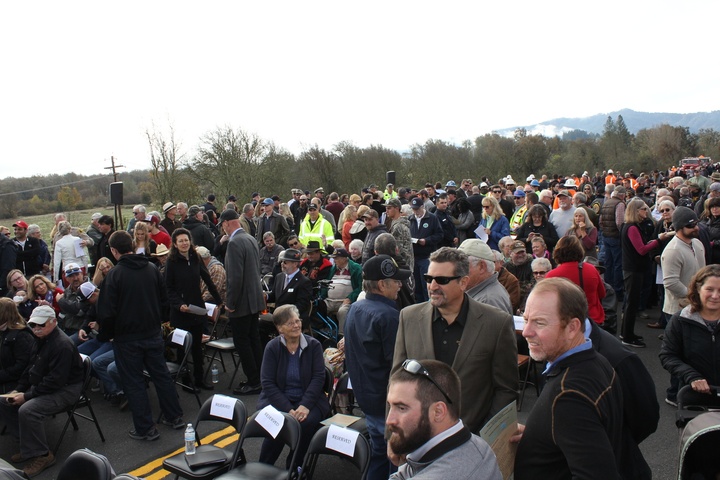 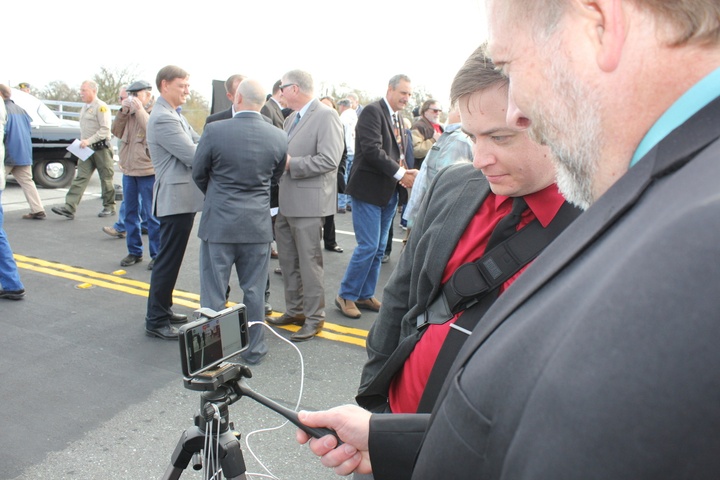 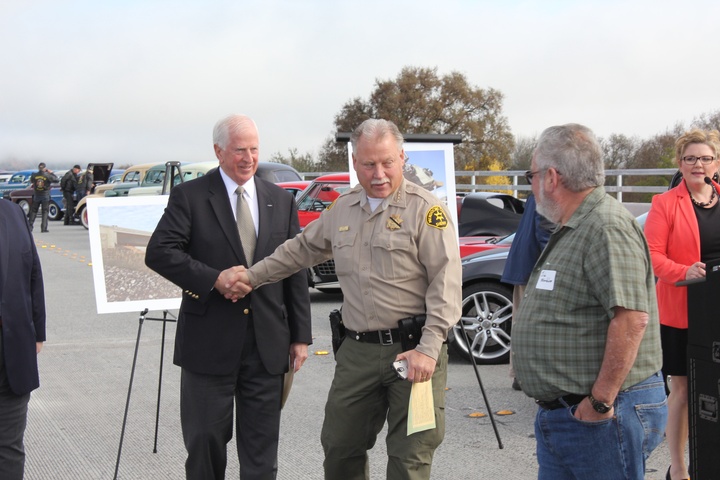 Recently retired Caltrans District One Director Charlie Fielder was the first person invited to speak. He spoke of the challenges that have dogged the bypass since it was first envisioned in the late ‘50s — the 1964 flood, the oil crisis of the 1970s, the Northridge and Loma Prieta earthquakes — all times, he said, when the little bypass in the north part of the state was pushed back down to the bottom of California’s priority list.

Throughout, he said, the people of Mendocino County were steadfast.

“One thing that’s never changed is the support of the people we had locally,” Fielder concluded, thanking the various mayors and city councilpersons and members of the Willits public in the crowd. “So here we are, 50 years later, and boy am I proud to be standing on this viaduct right here.”

Malcolm Dougherty, Fielder’s former boss, got off the joke of the day when he was brought up to the podium.

“Someone once told me the Cubs would win the World Series before this bypass opened,” he said, to much guffawing.

The fog started to burn away as Dougherty spoke, which allowed the California Highway Patrol to perform a helicopter overflight of the scene — something Caltrans had helped arrange. It was, like much of the ceremony, intended as a mark of respect for Pittman, a Willits kid turned Navy SEAL who was killed in action in Afghanistan. 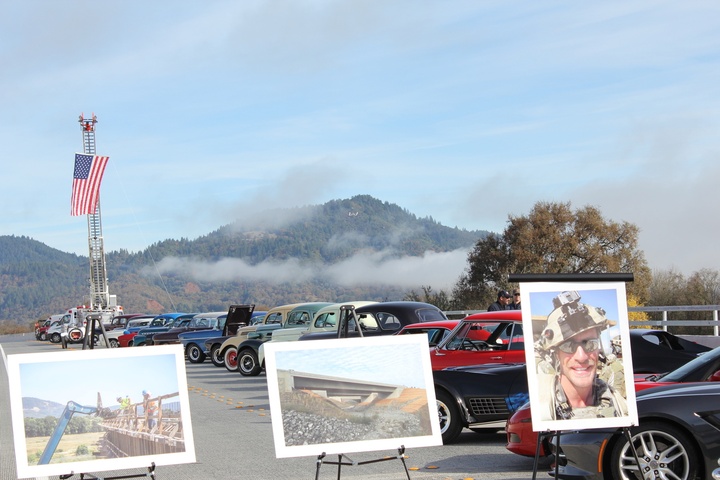 The sun comes out, revealing the big white “W” on Big Darby Peak to the crowd below. Fallen Navy SEAL Jesse Pittman, a local kid to whom the central section of the bypass is dedicated, is pictured at right. 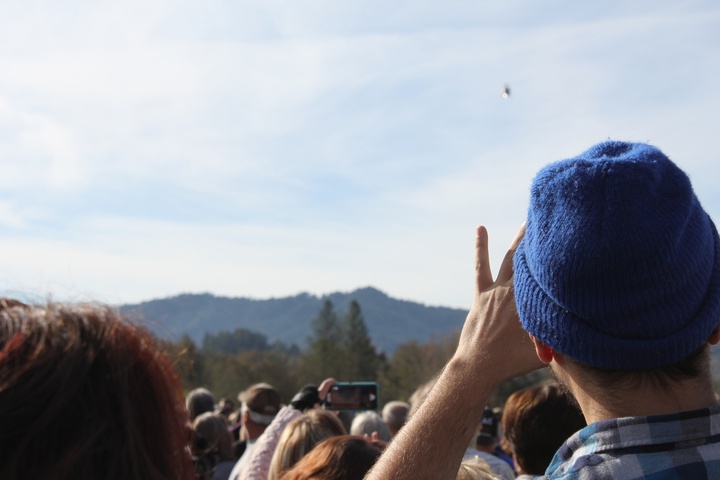 A California Highway Patrol Helicopter does a flyover in honor of Pittman and the other Gold Star families in attendance. 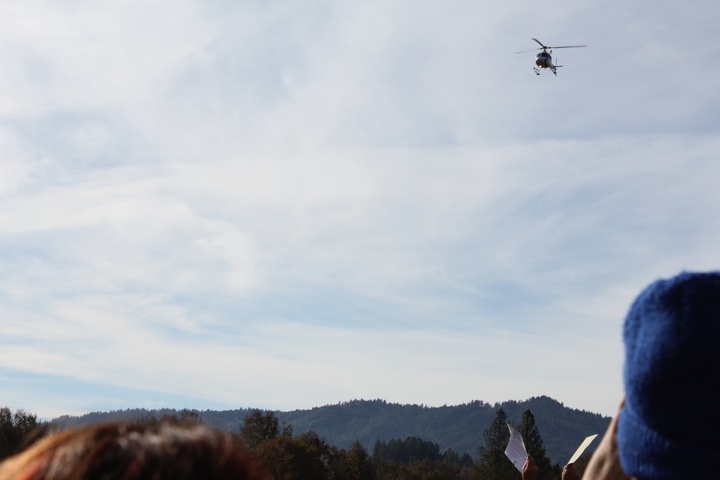 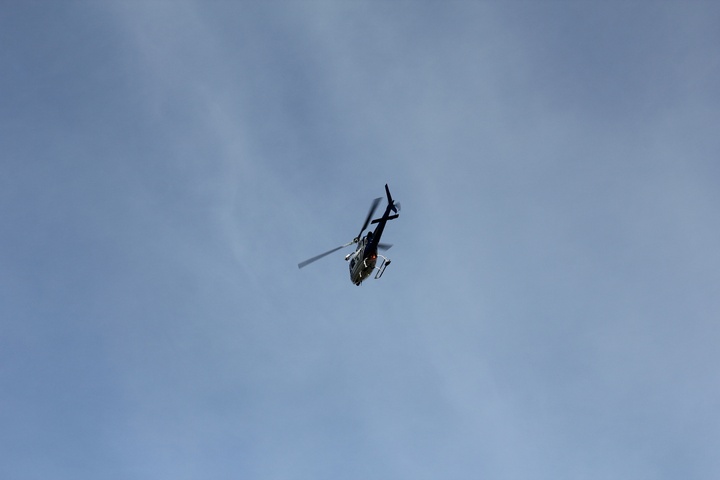 Many more speakers followed the flyover. Rep. Mike Thompson, who represented the region before redistricting took the North Coast away from him, told a joke that got a lot of laughs. The butt of it was a colonel in the Army Corps of Engineers — the agency that regulates wetlands fill — and how totally dumb and unprincipled his opposition to the bypass was. It was well received.

This was a thread that ran through several of the following speakers — scorn aimed at regulatory agencies and protesters who held up the project at one time or another. A representative of the Operating Engineers Local No. 3 union bemoaned the “myriad of frivolous and costly delays” around the project over the last four years. Likewise, a representative of Flatiron, a construction firm that worked on the project, thanked the California Highway Patrol for escorting workers to the site when protesters were about.

Willits Mayor Bruce Burton marveled at the amount of red tape that went into getting the bypass approved, and of the amount of headache occasioned by protests and lawsuits filed by environmental interests, among others.

“There’s something we gotta do to streamline the process around this if we’re going to improve our country’s infrastructure,” said Burton to applause.

Assm. Jim Wood corrected this a bit when he was brought up to introduce the segment of the morning honoring Pittman. Before presenting the SEAL’s family with a proclamation from state government honoring his life and his deeds, he said that Jesse Pittman fought for a country where dissent was honored, and given the several speeches that had preceded Wood it was hard not to read the sentiment as an apology (or something) to those who had opposed the bypass from the start. 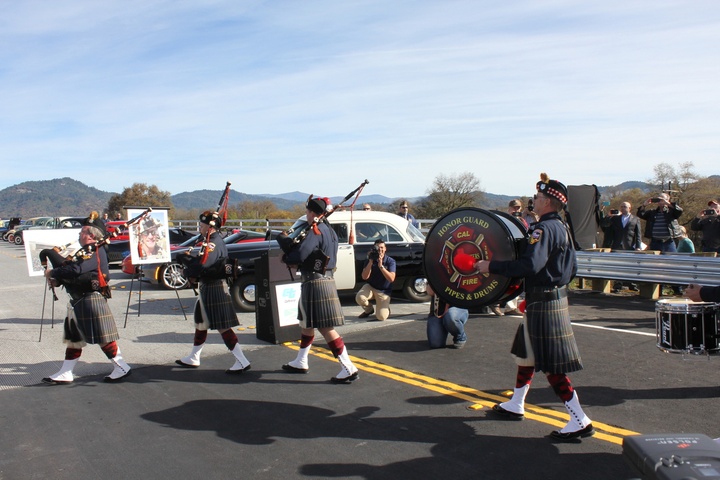 Drums and bagpipes marked the part of the ceremony honoring the families of fallen soldiers in attendance. 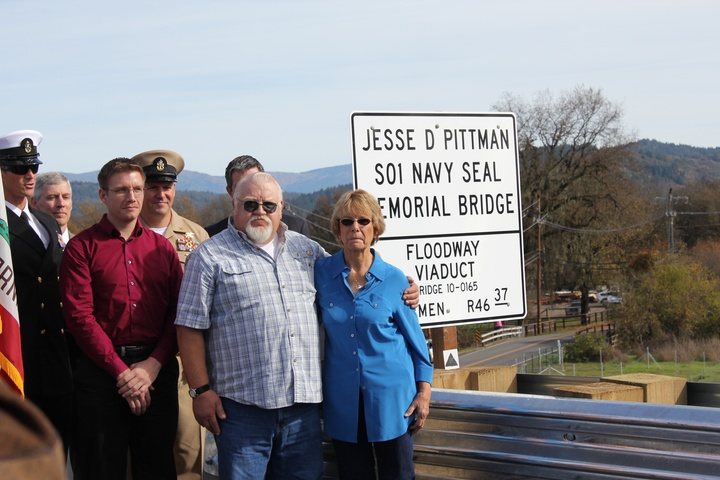 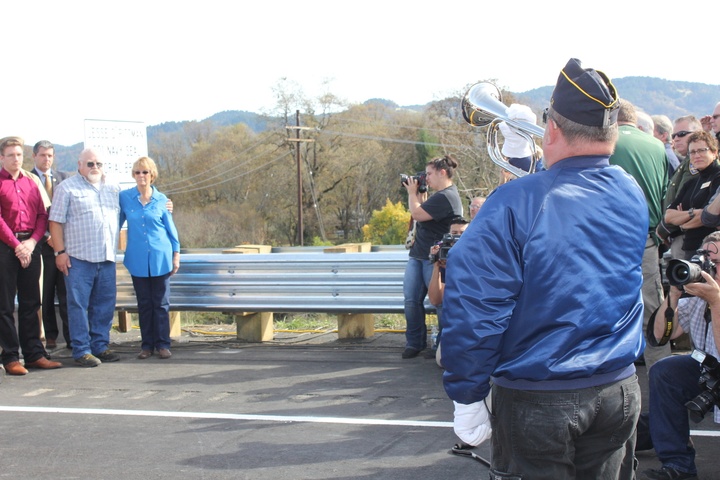 Two of Pittman’s fellow SEALs spoke. They had served with the young Willits native who was killed in Afghanistan along with 29 other U.S. serviceman when their helicopter was shot down by rocket-propelled grenades in Afghanistan in 2011. Then Pittman’s brother spoke about his childhood.

They told of a rebellious, strong-willed young man who fought wildfires before aspiring to join the service. They talked about his childhood, and about his amusing personality, and about the specific details of the dangerous operation he was sent on when he came under fire.

All three of these speakers were brilliant, and I won’t attempt to summarize them. Do yourself a favor and see them yourself in Caltrans’ recording of the event. They start at about the 57-minute mark.

“So, obviously, we are not going to play it,” Totten said.

Again: The Willits Bypass opens to through traffic later today.