LETTER FROM ISTANBUL: The Red Castle

The other day my wife and I went to visit a friend’s father in the hospital. The hospital was located in Balat, on the southwest part of the city. In all my years in the city, I’d never been to Balat – it’s a bit out of my way.

My wife, Özge, and I took a bus from Eminönü. The bus took us along the inner curve of the Golden Horn. It was National Victory Day, so Turks were set to assemble in Taksim and other squares around the country that evening to celebrate the end of the great Independence War, when Ataturk sent the retreating Greek invaders into the Aegean Sea. 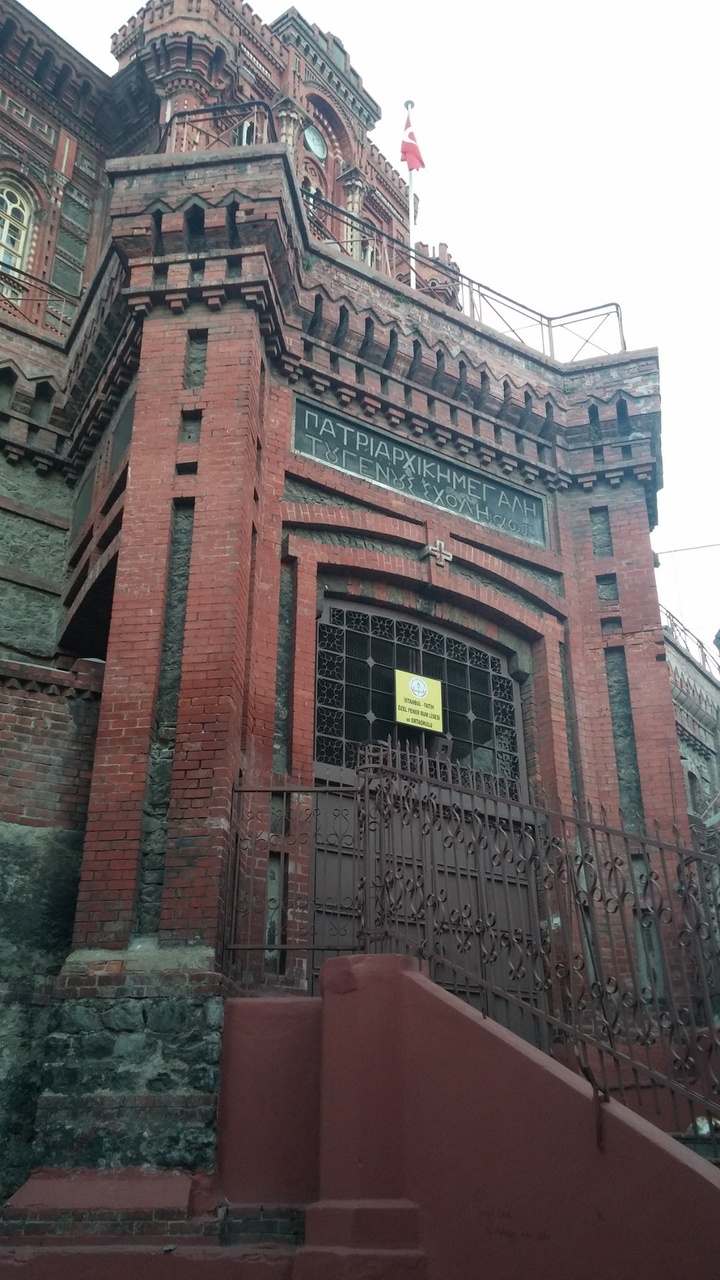 Of course, the timing of the anniversary this year is especially palpable, given the recent military coup attempt. All across the city, on the sides of buildings, on billboards, even highway overpasses, banners continue to call for national unity.

My wife and I were in no mood for the crowds at Taksim, and as I said we were going to visit a friend’s father in the hospital anyway.

The hospital was a private, Jewish-owned facility right on the Bosphorus. We went and saw our friend, and gave the father get-well wishes. Özge and the friend used to work together at the national palace, so afterward we sat in the hospital garden so they could catch up.

Later, Özge and I decided to walk back along the Bosphorus, instead of just taking the bus back to Eminönü. We both realized that we knew very little about the neighborhoods of Balat and nearby Fener.

The two neighborhoods are built on hillsides, like much of the city, and are crested by remnants of the ancient Constantinople city walls. In fact, many of the shops, cafes and restaurants are built literally into the walls. During Ottoman times, they were Greek neighborhoods. Later, during the 1950s, most, if not all, of the Greeks were deported to Greece, while the Turks in Greece were returned to Turkey, a vestige of the still-heated animosity left over from the Greco-Turkish War (1919-1923).

The Greek influence remains visible. Walking along, dodging the oncoming traffic – the sidewalks are very narrow, and most of them are used as parking places – we come across the Zorba Restaurant, and other similarly Greek-themed haunts. There are many Turkish places, too, – the kebab places, the occasional nargile, and the inevitable rug sellers.

Eventually we come to the true reason for our decision to walk back. Earlier, on the bus, we’d noticed a vast, splendid red structure on the top of the hill, looking majestically down toward the city. “What’s that?” I’d asked. It was the Phanar Greek Orthodox College, my wife explained. “Come on,” she urged. “Let’s go and have a look.”

Again, as has happened so often, I marveled at the seemingly endless scope and variety of the great city. No matter how you long you live here, there’s always something around every corner, waiting to startle you, stir the imagination.

We walked up the hill in Fener, through narrow, run-down streets. This was an old neighborhood, with most of the buildings and tenements in a state of severe neglect. Laundry hung drying from some of the balconies, and covered women sat outside the doorways, drinking tea and gossiping. We felt like tourists, with our smart phone cameras in hand, but the women scarcely paid us any attention.

Up the hill we arrived at the gateway steps of the college. Even up close, it stretched up into the sky, commanding the nearby horizons. Later, I read that the Turks called it the Red Castle, and it was easy to see why, from its palatial size and scope. An old man sat on the steps, musing in the fading light. He nodded at us as we passed, and returned to his solitary reflections. A black cat lurked, poking its nose at the cobbled street, and continued further up the hill.

My wife and I were seeing the great Phanar college for the first time, and we knew little about it. It was only later, with a Wikipedia search, that I learned that we were in fact standing at the foot of one of the world’s oldest surviving religious schools. The actual building was constructed in the 19th Century by an Ottoman architect, but the school itself was founded by none other than the Emperor Constantine himself, back in the 4th Century. Initially, the school was based in the Hagia Sofia, but after the Ottoman conquest the school was moved to its present location. These days, it remains a secular school, and the great dome at the top is used for astronomy classes.

Anyway, we’re not here for a history or religious lesson. It was just a pleasant surprise, having stumbled upon yet another of the city’s many wonders. Istanbul is a vast city, and as I said, neither my wife nor I had ever been to this particular part before. The Red Castle seemed to fit like the jewel in the crown of an afternoon that had taken an unexpected turn – we were just supposed to go and visit a friend’s sick father in the hospital, after all.

We walked back down the hill, after taking a few pictures, and continued the trek back along the waterfront road. We passed more Greek-themed cafes and shops, with the vendors and proprietors sitting outside, enjoying the humid evening and the sun setting over the Bosphorus. Some of the men even stood in the busy street, talking and arguing, taking no notice of the cars rushing by, in the best Mediterranean fashion.

Eventually we managed to make it to the bridge where the metro passes over the Bosphorus. We were sweating, exhausted, so I suggested we just grab the metro. With a heavy sigh, Özge relented. The metro line here is still new, and you go up several flights of stairs to the bridge. You walk alongside the bridge and it feels almost futuristic, the passage all lit up, smooth, stream-lined, while to your left beckons the ghostly blue waters of the Bosphorus; beyond lay the minarets of the the mosques, rising up from the darkness of the cityscape.

We got the metro, which took us over to Yenikapı, where we caught the Marmaray to Üsküdar. There, we rose again from the depths of the earth and got a taxi. Despite our recent wanderings, we were glad to be back in our part of the city again. Other places felt like different cities – which is what Istanbul is really – a collision and kaleidoscope of different cities, different worlds, blended, or jammed, together.

In the taxi, we passed a procession. The traffic was backed up, allowing for the procession to pass. They were all carrying candles and waving banners. It was for the Victory Day. I was glad that we got to see some of the procession – to sort of vicariously share in the glow of remembered triumph – but also glad that we had been to the Red Castle and to Fener and Balat. These places remind you that even now, traces of the ancient Greek tradition that has been part of the city since the very beginning, continue to be felt today. Is that irony? That on the Victory Day, we somehow ended up visiting an old Greek neighborhood? If so, the irony was unintended.

James Tressler, a former Lost Coast resident, is a writer and teacher living in Istanbul. His latest collection of letters, “Living in Terror,” can be found at Lulu.com.