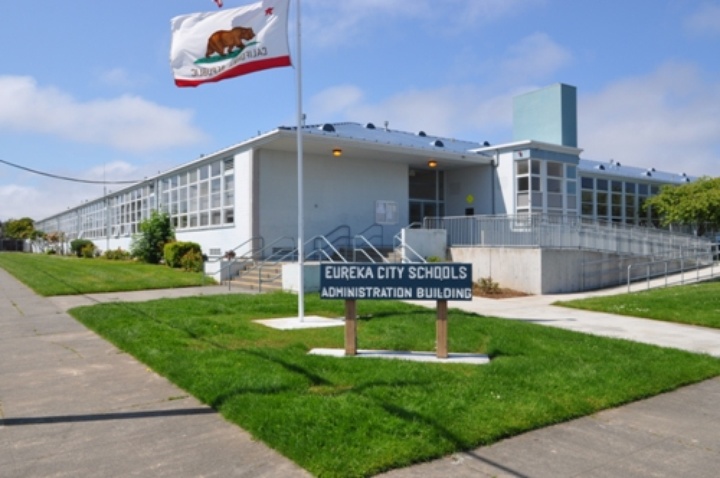 For decades now Eureka parents have had a choice of where to send their kids to school. Even if their chosen school was outside local district boundaries, all they had to do was request an inter-district transfer, and as long as there was room at the other school the request was granted as a matter of course. Seven years ago that policy was formalized countywide with an “open enrollment agreement” between all 32 school districts in Humboldt County.

But with that agreement set to expire in June, Eureka City Schools Superintendent Fred Van Vleck has proposed capping out-of-district transfers, a move that would force many Eureka parents to send their kids to whichever school is closest to home.

The proposed change has angered many Eureka moms and dads who say the restrictions would unfairly limit the educational choices they make for their kids. And they’re upset that the proposed policy shift wasn’t brought up sooner. Even outgoing Humboldt County Superintendent of Schools Garry Eagles is questioning the proposal.

“I feel like I should have the right to decide where I put my child, especially if I feel she’s falling behind and the teachers and administrators are not listening,” said Eureka mom Suzann Rose.

Rose’s eldest daughter attended Washington Elementary School and is now enrolled at Eureka High, but Rose wasn’t happy with how her daughter was treated at Washington. It turned out her daughter had a learning disability, but when she asked Washington teachers and administrators for help, she wasn’t satisfied with their response. So she enrolled her younger two children in Freshwater Elementary, which has its own school district.

“Freshwater is amazing,” Rose said. She’s happy with the smaller school size and has been active in fundraising. This year she enrolled her youngest, a boy, into kindergarten at Freshwater, and now she’s worried about his future.

“I’m really scared that he’s gonna get stuck at a Eureka city school where, I hate to say it, they don’t really care about the children; they care about the money,” Rose said.

Van Vleck, the Eureka City Schools superintendent, said there has been a lot of misinformation circulating. “First off,” he said, “it’s not the intent of the Eureka City Schools or the Board of Education to revoke any of the current inter-district agreements that are out there.” If a student has transferred to an out-of-district school, he or she will be allowed to stay enrolled through whatever grade that school offers, he said. Rose’s youngest son, for example, would be allowed to stay at Freshwater through sixth grade.

“We’re also committed to not breaking up families,” Van Vleck said. So if a Eureka boy is currently enrolled at, say, Sunny Brae Middle School, his younger sister would be allowed to enroll there, too.

But for now, Van Vleck said, this is all speculative; no final decisions have been made. The current open-enrollment agreement, signed by all 32 districts in the county, had a five-year term, the longest period allowed under the California Education Code. “Right now we’re in the midst of negotiating with other school districts what that new agreement will look like — and if there will even be one,” he said.

The district’s current proposal would include three main entry points for students — the start of kindergarten, middle school and high school. So while a Eureka kid currently attending, say, sixth grade at Jacoby Creek would be allowed to remain there through eighth grade, Van Vleck said, “the next transition is high school, and the expectation is you’d come back to Eureka High.”

There would be a couple of exceptions to that rule: Parents can establish residency in another district if they work there at least 10 hours per week. So parents who live in Eureka but work at HSU could enroll their kids at Arcata High, for example. The other exception: The rules wouldn’t necessarily apply to foster kids and homeless youth, who have “a whole different set of rights,” Van Vleck said.

Even with these caveats, Eureka parents are concerned. Zeke Smith and his wife have enrolled both of their children out-of-district. Their daughter is halfway through primary school at Freshwater Elementary, and their son is now an eighth grader at Freshwater’s charter middle school. In anticipation of their son’s graduation, the family toured a number of different local high schools. Zeke and his wife even attended parents’ nights at Arcata and Eureka high schools. Ultimately they decided on Arcata.

“We talked about it a lot, thought about it a lot,” Smith said. “It’s kind of a big decision for a family.” They just recently finished making it and turned in the necessary paperwork for their son to attend Arcata High School, where he’d be with many of his Freshwater friends and could take advantage of the school’s impressive art and music programs.

Suddenly the family is unsure whether he’ll be allowed that option.

“This is a big surprise,” Smith said. “It makes a time that’s already hard and stressful a lot worse.” The family’s main complaint, he said, is how suddenly this proposal emerged and how quickly it would take effect.

”I think Eureka’s got a fine school and a fine program, but when people have the expectation of being able to choose, and when they already have chosen, there should be a grace period — three years, two years, whatever.”

And it’s not just the parents and their son who are upset. “My little girl was up crying last night, worried she would have to switch schools,” Smith said.

Other school districts in the county are questioning the Eureka City Schools proposal, too. In an email sent to parents yesterday the principal and superintendent of Jacoby Creek School District said they’d prefer to renew the current countywide open-transfer agreement, “with some modifications to make the process less cumbersome for families.”

District superintendents met earlier this week at the Humboldt County Office of Education to discuss doing just that, according to the email. “At that meeting, Eureka City Schools indicated that they are not interested in continuing the current agreement as it stands,” it states.

Humboldt County Superintendent of Schools Dr. Garry Eagles is also questioning the wisdom of Eureka City Schools’ proposal. “From my professional standpoint I support parent choice, but I don’t dictate to districts what they can do,” Eagles said. But he reiterated: “Open enrollment, or parent choice, is a preferred policy. I’ve maintained that philosophy forever.”

The recipients are schools like Garfield, which is in its own district situated between Kneeland and Freshwater. With the lumber mill in that valley long closed, not many families of Garfield students actually live in that district. “Garfield has been able to survive by inter-district agreements,” Van Vleck said. “If those were all gone, that school would be out of business. Now, Eureka City Schools is absolutely not interested in bankrupting any district,” he added. “However we are interested in limiting [transfers] to a reasonable number.”

Eagles is not convinced that these enrollment issues justify such a change in policy. While enrollment was on a downward trend for many years countywide, Eagles noted that over the past four years it has stabilized in the larger school districts Van Vleck cited. “None of those districts is significantly declining,” Eagles said.

Charter school enrollment has gone up. Roughly 14 to 15 percent of Humboldt County students attend charter schools, well above the statewide average of 9 or 10 percent, Eagles said. But that trend wouldn’t be curtailed through the proposed policy shift by Eureka City Schools. Per state law, all charter schools are open to any student who wants to apply.

Eagles said he understands that Eureka City Schools wants the families who live in the district to send their kids to their own neighborhood schools. “But at what cost?” he asked. “Parents have chosen those very small school environments. I don’t know how you take away those opportunities when they still exist, particularly when the facts show that the bigger districts are not significantly declining [enrollment]. I think it would be more disruptive to change what has been a decades-old practice in most of our local schools.”

Van Vleck, on the other hand, said the countywide open-transfer agreement is unusual. “In my experience, where I’ve worked, I’ve never heard of one of these agreements.”

Of course, Humboldt County has a long history of nonconformity. “People in Humboldt County like to do things their own way,” Eagles said. He pointed to our region’s high percentage of charter school enrollment as “a notable expression of independence.”

Eureka parents have been expressing their strong views on social media, and they’re likely to continue doing so at the school board meeting Thursday night. Again, the meeting will be held on February 16 at 7 p.m, in the Eureka City School’s Board Room, 2100 J Street.