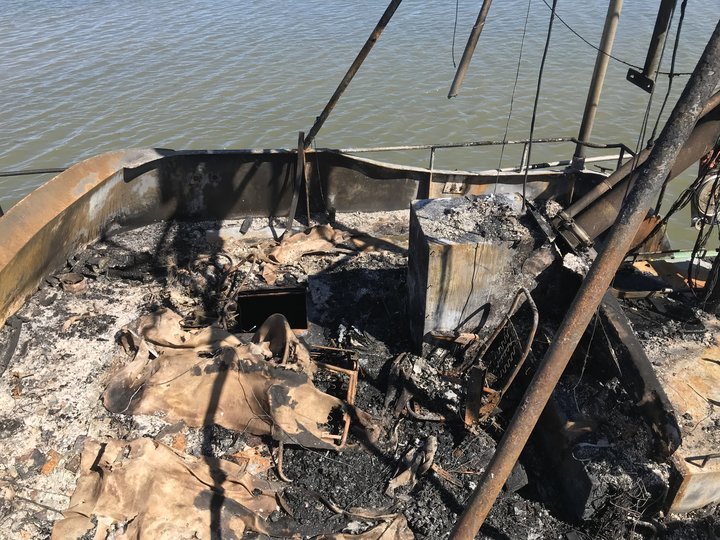 Photo of the Midori taken today by John Ferrara.

MCKINLEYVILLE, Calif. — The Coast Guard is coordinating fuel removal and salvage operations Thursday for a fishing vessel that caught fire Wednesday near Eureka.

Coast Guard Marine Safety Detachment Humboldt Bay pollution responders have determined the 47-foot vessel, Midori, is safe to tow to the Eureka Municipal docks, where a reported 1,500 gallons of diesel will be removed before the boat is salvaged.
Fuel removal has not been scheduled.

The case began around 9 a.m. Wednesday, after a crewmember from the distressed fishing vessel, Midori, contacted another fishing vessel, Charlie D, via cell phone to report a fire aboard.

The Midori crew donned their survival suits and abandoned ship into a life raft prior to the Coast Guard’s arrival. A good Samaritan fishing vessel, Pacific Bully, rescued all five crew members before the Coast Guard helicopter and boat arrived at the location to find the vessel’s pilothouse engulfed in flames. Shortly after, a passing tug, the Michelle Sloan, diverted from its course and extinguished the fire aboard the Midori.

The captain of the Midori reported that the vessel had a maximum of 1,500 gallons of diesel remaining aboard, and that no serious injuries were sustained by the crew during the incident.

“The quick response of the vessels Pacific Bully, Charlie D and Michelle Sloan, along with the Midori’s readiness with appropriate survival equipment saved the lives of five fishermen yesterday,” said Cmdr. Brendan Hilleary, the chief of response at Sector Humboldt Bay. “Our crews continued the good work this morning by mitigating the threat of pollution the vessel could have caused.”

Before the vessel was towed to port, a helicopter crew from Sector Humboldt Bay conducted an additional overflight Wednesday evening to assess any potential pollution and saw no signs of a spill in the area where the vessel caught fire.